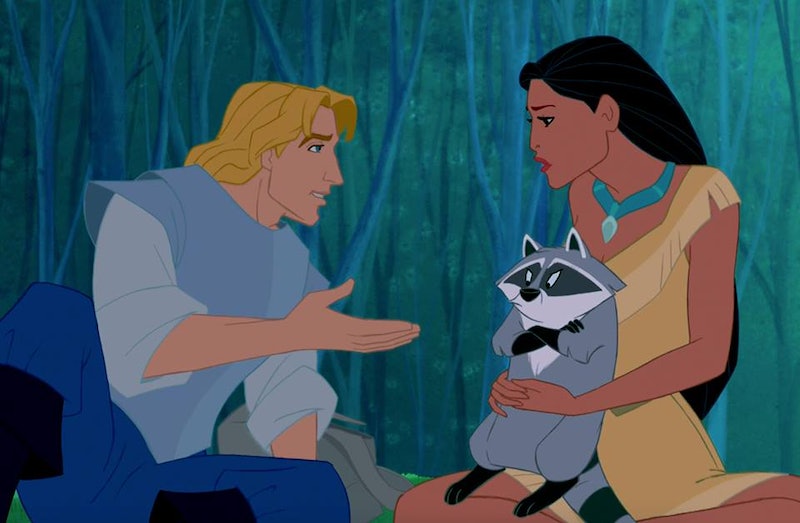 During childhood, Disney movies showed me some of the best cartoon romances. Ariel and Prince Eric from The Little Mermaid, Belle and Beast from Beauty and the Beast and others made me think it's total possible to find your soulmate after a lengthy quest and before the end credits roll. But there are some Disney couples that should have never happened. When you grow up and become an adult, you realize some of your childhood favorite movies and TV shows portrayed some dysfunctional relationships and some that are plain weird — just like you find in real life.

In both TV and movies, the Disney standards for love are pretty hard to beat: Grand gestures, big adventures, magic, spells, and sometimes a catchy song. But in the real world, dysfunctional couplings cannot be fixed or mended with a charming duet or an Italian dinner in which spaghetti leads to a cute kiss (ahem, Lady and the Tramp). In these cases, I think it would've been beneficial for fans if the characters never met and fell in love, because we all would have been better off without the major drama.

And in some cases, these love stories either never happened historically or are bound to end horrifically, so maybe they shouldn't have happened in the Disney canon, either. Check out 13 Disney couples who should stay away from each other, below.

1. Sonny Monroe & Chad Dylan Cooper In Sonny With A Chance

Historically, there's no proof that this romance ever happened, so I don't see why they couldn't just be just friends in the Disney movie version. Besides, she met her husband John Rolfe in the sequel.

3. Belle & Gaston From The Beauty & The Beast

Gaston was the worst. He just wanted Belle for her looks and not for her smarts. He also couldn't take no for an answer.

Vanessa, of course, was the evil Ursula in disguise and she enchanted Eric into thinking she was the one. So mean.

I keep forgetting this happened, but when I remember, I wish I hadn't. Lizzie and Gordo forever.

Talk about one of the most deceptive engagements in Disney movies. Anna and Hans met and got engaged right away. Little did she know of his evil plan.

Because it was a relationship based on lies — so how could they ever really trust each other?

Ron was always Kim's loyal, crime-fighting sidekick, so did they really need to become romantic in the final season of the show? Other than Kim, here's another thing that is Possible: Strictly platonic friendships between men and women.

I appreciate Riley and Lucas not being OTP like Corey and Topanga were in Boy Meets World, but I never totally felt like Maya and Lucas were/are a possibility.

Here's what is troubling about this romance: In Greek mythology, Hercules and Megara get married, have a son, and then Hercules kills them because Hera gives the Herc temporary madness. So that makes this Disney movie coupling really, really bleak.

Mabel went on one date with this weird guy and he went on to haunt her and her brother Dipper all summer long.

I never really understood this coupling. Tramp talked down to Lady, telling her that her lovely owners were going to hate her once they had a baby, yet she fell for him during that famous Italian dinner scene. Then she found out he was a total player and he knocked over the family's baby crib. All of this wouldn't have happened if she never met Tramp.

13. Phoebus and Esmeralda In The Hunchback Of Notre Dame

Quasimoto's heart broke into two when he saw that this couple was going to be the one that lasted. Sadface forever.

This just shows that Disney has had plenty of cases of true love — but also some not-so true love over the years.

More like this
Selena + Chef Season 4 Was Filmed At Hannah Montana's Old Malibu House
By Jake Viswanath
At 28, Lesley Manville Was Acting, Picketing, & Singing Kate Bush Songs
By Olivia-Anne Cleary
Indian Matchmaking’s Viral Revealed A Major Clue About Her Relationship With Aashay
By Radhika Menon
Nicola Walker’s IRL Husband Is No Stranger To TV Screens
By Darshita Goyal
Get Even More From Bustle — Sign Up For The Newsletter