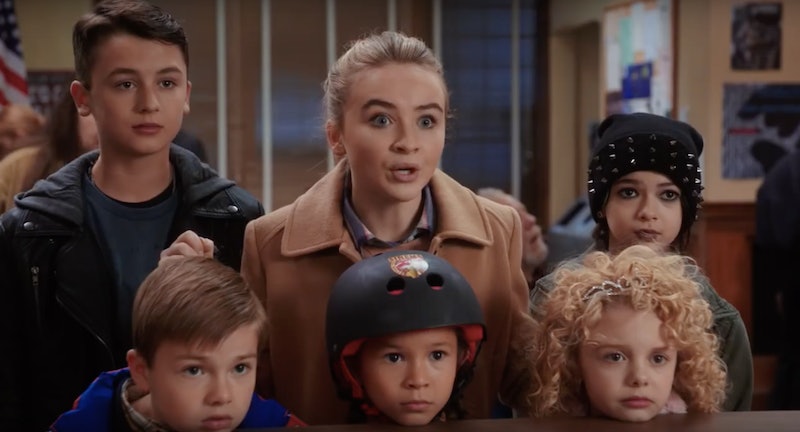 The time is approaching for another Disney Channel Original movie to hit our TV screens, but this time around, the premiere is cause for an even bigger celebration. For it's 100th original movie, the Disney Channel has rebooted Adventures in Babysitting . It looks like absolute F-U-N too. Can you believe that the Disney Channel has created 99 iconic original movies in a legacy lasting over 20 years? Featuring two of the Disney Channel's brightest current stars, Sabrina Carpenter (Girl Meets World) and Sofia Carson (Descendants), Adventures in Babysitting will likely be a more Disney-fied version of the 1987 original: still madcap but more twee. What we can actually expect from this reboot, aside from the inevitably fun tone, looks to be some creative twists on the original, though. There will be criminal activities, handsome love interests and cheeky quips flying left and right.

Admittedly, those of us who are old enough to remember the glory days of the DCOMs (millennials, unite!) may be a bit skittish to tune into Adventures on June 24. But wait! This reboot looks to be a call back to the glory days of DCOMs. It's rare that the Disney Channel has swerved into reboot territory, especially with a film that is not originally a Disney title originally. While the film has been in development for a long time (Raven Symone was originally cast back in 2006 as the lead!), the project is finally coming to eager audiences. Adventures is sure to cap a long reign of DCOM's that are now full of joy and nostalgia for many of us, while ushering a new love for what makes a DCOM so lovable for a younger generation. Don't believe me? Here a few of the the reasons why the rebooted Adventures is sure to be a hit.

Two Babysitters Instead Of One

The most notable differences — aside from the missed opportunity of casting original Adventures actress Elizabeth Shue — start with the leads. With Carson and Carpenter as an unlikely chalk-and-cheese team, there's bound to be hilarious friction galore. Both girls are set up to be rivals for the same photography internship, sparking a natural competition that will spill over into who can be the best babysitter. It's a combination of the iconic strong female heroines of DCOMs of yore as well as the serious talent the two girls bring to their characters that make this one of the most exciting parts of the reboot.

The new Adventures has ditched the blues music of the original in favor of a more contemporary musical medium: rap. Even better? The whole gang is engaging in a full-on, sanitized-yet-sweet rap battle. One of the best lines has babysitter Jenny (Carpenter) carefully using "witch" in place of the far cheekier adjective. Such a Disney move. I hope this becomes one of the most iconic DCOM moments in the years to come.

This time around, it's not just one family that's running amok, but a blending of two families. Or rather, two sets of kids. It looks like the adventure begins with Jenny being forced to bring the kids she is babysitting over to Lola's, letting us get a glimpse at the wild crew that are the Anderson and Cooper kids. Each one is a unique and endearing individual. Goodness knows sparks of silliness will seriously fly when they get together.

Prepare yourselves. There will be no return of any Thor-themed helmets on any of the main characters. We can only hope one of the most iconic looks of the original film may make an Easter egg appearance but it's OK that it's gone. In its place will be a very cool Jeep (which you can see in the preview below), which is decked out in such a way I'm sure many of us will be sneakily trying to recreate it after we watch the rebooted Adventures.

At its core, Adventures will definitely be adhering to what made the original so great: the weirdness of being a kid thrust into some rather grown-up situations. Many of us have been a babysitter at one point or another. We remember how weird and silly it can get watching kids we're not even related to. Add in the extra excitement of running through the city, evading criminals, singing in seedy bars and trying to avoid getting caught out past your bedtime are what made the original so much fun. The reboot will definitely be following suit if we are to trust any of the previews.

Is this 100th DCOM still worth tuning in for? Watch the first 10 minutes of Adventures in Babysitting below and decide for yourself. I, for one, will definitely be making this my only plans for the premiere night.