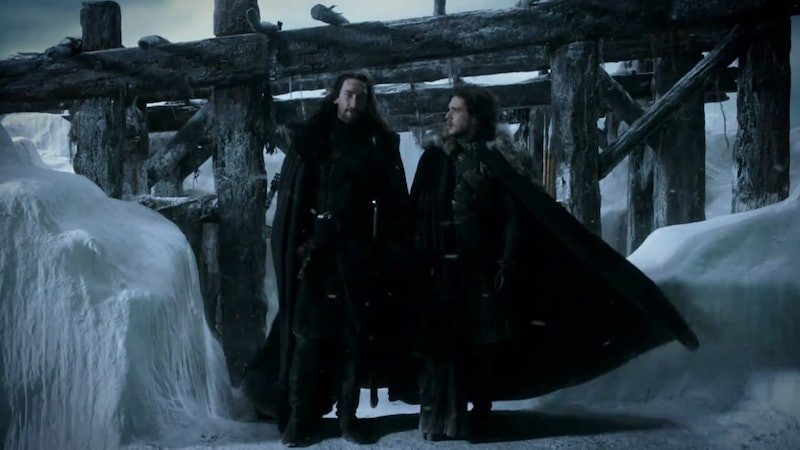 With the amount of characters popping up, rather than dropping dead, on Game of Thrones in Season 6, it's getting a little difficult to keep track again. I may need to start writing out family trees again, like I used to do for the earlier seasons. For example, how are Benjen Stark and Jon Snow related on Game of Thrones ? Let's do a quick refresher on their history.

Benjen showed up for Bran in Sunday's episode, but of all the Starks, he is most associated with Jon. We met Benjen Stark in the pilot episode, back when House Stark was young and innocent and allegedly only had one secret, the identity of Jon Snow's mother, lying around. Benjen rolled up late to welcome King Robert Baratheon (remember that guy) and visit his brother Ned (remember that guy). Benjen escorted Jon back with him to enlist in the Night's Watch, and disappeared on a ranger mission soon after.

If you buy that Jon Snow is Ned Stark's son, then Benjen is his direct uncle. Benjen was the youngest brother to Ned, Lyanna, and Brandon Stark. I mean... actually, even presuming that R+L=J is true and Lyanna Stark is Jon's mother, that still makes Benjen his uncle. So let's just go ahead and call them uncle and nephew. Overall, the chances of Benjen and Jon being blood-related is pretty high. It's close enough.

Also, Jon Snow literally walked into a literal death trap unarmed at the mere mention of this guy's name, so clearly they were close. Everything started going downhill for Jon at the Wall when Uncle Benjen left. He was Jon's hero and mentor, but we never really learned why. What about Benjen did Jon Snow relate to? We know that Jon has a good eye for outcasts like himself. That's why he was so close with Arya. That's why he shared a meaningful conversation or two with Tyrion Lannister. There might be something more to Benjen Stark that meets the eye, which is exciting, because if there is — we're definitely about to find out.

More like this
15 Photos Of The 'House Of The Dragon' Cast At The Show's UK Premiere
By Radhika Menon
Everything To Know About 'Evil' Season 4
By Meguire Hennes
Does 'Locke & Key’s Ending Mean There Could Be A Season 4?
By Sophia Moore
‘The Simpsons’ Will *Finally* Address How They “Predict The Future”
By Sam Ramsden
Get Even More From Bustle — Sign Up For The Newsletter