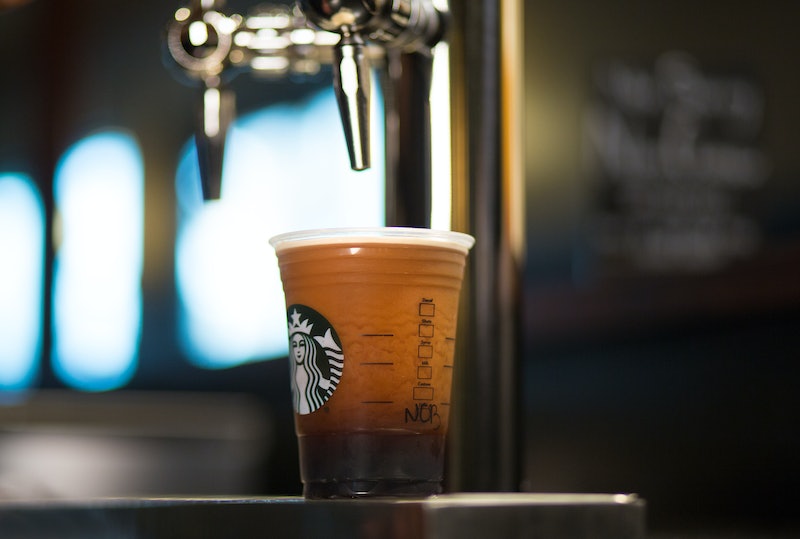 It's getting hot out there, y'all, and chances are your iced coffee cravings are red zone-level high right now. I totally hear you, and so does Starbucks. That's why it's introducing Starbucks Nitro Cold Brew to its new Cold Bar menu this summer, and let me tell you, it's unlike anything you've yet to try. Like, you may think you're a seasoned iced coffee veteran, but you haven't seen anything yet.

What is Nitro Cold Brew, you might be asking, and how is it different than Starbucks' regular Cold Brew? Those are valid questions, and ones that I'm more than happy to answer, seeing as how iced coffee in its various forms is my saving life force during the summer. As you may recall, Starbucks made its Cold Brew a permanent menu item last year after testing it out in 2,800 different stores around the country. The regular Cold Brew is crafted in Starbucks stores every single day, and is made by steeping coffee in cool water for 20 hours for a brew that is stronger than your average iced coffee, and has a much richer, smoother flavor. As for Nitro Cold Brew? Well, that's where things start to get interesting.

Nitro Cold Brew is essentially your regular Starbucks Cold Brew, only it's been infused with nitrogen, a process that is kind of like carbonating soda. However, unlike the fizzy bubbles you get from adding CO2 to beverages, the nitrogen gives the Cold Brew a super smooth, velvety texture that's slightly thicker and creamier than what you normally get. It almost tastes like you've added cream or milk to the beverage, only you haven't — that's the nitrogen working its magic. In fact, most baristas suggest drinking this foamy beverage without any milk or sweetener. That way, you can fully experience the unique notes emanating from the coffee; in this case, you experience super subtle hints of chocolate. And, believe it or not, the Nitro Cold Brew is usually served without ice. That's because it's dispensed from this nifty brewery-esque tap, which keeps it cold:

It's kind of like the craft beer of coffee, right? Only better, of course, because it's caffeinated — a 12 oz. serving of the beverage has 245 mg of caffeine (for reference, a 12 oz. Pike Place coffee contains 260 mg).

The Nitro Cold Brew is launching in 500 participating stores all over the country this summer, starting in Seattle before making its way to Portland, and later New York, Chicago, Boston, San Francisco, and Los Angeles. A tall will run you about $3.95, depending on the market.

I think my favorite thing about Starbucks' Nitro Cold Brew is that it seems ultra fancy — it's dispensed through a tap, you guys — but there's actually nothing fussy about it whatsoever. It's the regular Cold Brew you love, served with a unique and delicious twist. In other words, it's something that you definitely need to add to your summer bucket list, ASAP.

More like this
Starbucks Released New Menu Items For The Summer
By Emma Garza
This TikTok Hard Seltzer Hack Involves A Milk Frother
By Alexis Morillo
On TikTok, Orange Wine Is The Varietal Of The Summer
By Madeleine Aggeler
Is The Insta-Famous Always Pan Actually Worth It?
By Jessica Goodman
Get Even More From Bustle — Sign Up For The Newsletter