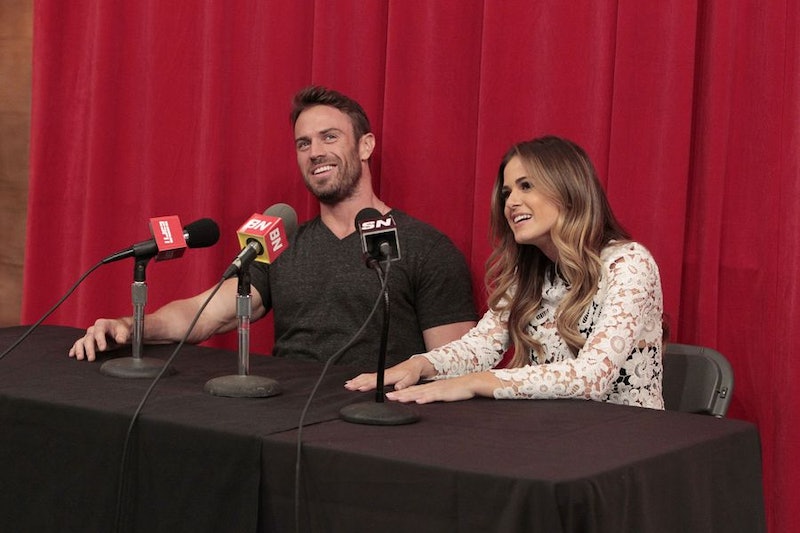 As any longtime fan of The Bachelorette knows, you have to suspend your disbelief a little bit to enjoy this show — and to be a contestant on it. Is it realistic to believe you're going to fall in love with someone enough to know you want to marry them in a matter of weeks? No. Is it realistic to fall in love with her within the first few days, enough to act like you have real feelings for her? Absolutely not. But these realities are something no one ever talks about... usually. On Monday night's episode, Chad got honest about The Bachelorette and his feelings, and, while it was refreshing, the way he went about it was totally out of line.

It all started with a group date challenge where the guys were supposed to spin around on a baseball bat and then, dizzy, propose to JoJo with a giant, fake ring. All of the guys were telling her everything they already love about her and how happy they'd be to spend the rest of their lives with her, but then, it was Chad's turn. His proposal was a little lackluster, and JoJo was unimpressed. That led to him calling her naggy (big no no) and then, he unleashed a serious rant on how ridiculous he felt everyone was acting.

Chad pointed out that there's no way he could list the things he loves about JoJo beyond the fact that she's pretty, because he hasn't known her long enough to know what those things are yet. And then he also called out the guys for acting like they're already in love with JoJo, because that would be impossible. Needless to say, this rant definitely didn't earn him any points with his fellow contestants.

OK, it's definitely refreshing that someone is finally willing to say all those things we think while watching The Bachelorette, but don't say out loud. Unfortunately, that honesty kind of falls flat when you consider the way Chad went about it. His particular brand of truth telling is harsh and condescending, and it's contributing to the reason he's not making any friends in the mansion. It's important to be honest, but it's just as important to be kind.

But surprisingly enough, this kind of honesty was attractive to JoJo, despite how Chad decided to express it. She said she's into "bad boys," and now I definitely believe her. My only worry: He's eventually going to be honest in a way that will hurt JoJo, and my heart couldn't take that. Homegirl has been through enough on national television already!