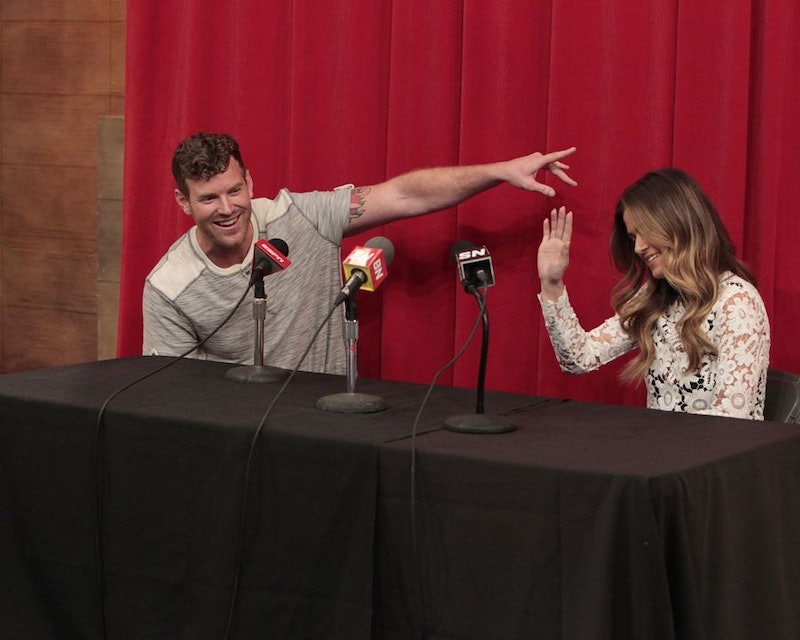 There are a million James on The Bachelorette this season, but I think I've already found the best one: James Taylor. Since there are still so many dudes vying for JoJo Fletcher's heart this early in the game, it's kind of hard to tell them apart, especially the ones who share the same name, but I will forever be able to identify this James as my favorite. Why? Because after all kinds of harsh, cynical moments in Monday night's new ep, James Taylor was so sweet to Bachelorette JoJo, and it was exactly what our girl needed.

When James finally got the chance to talk to JoJo one-on-one, he made excellent use of his time by promptly winning her heart (and mine). First, he told her the cutest line ever about how a smile is the only thing you see on the outside that comes from the inside, and then read JoJo the sweetest,most adorable letter. It was a little cheesy, yes, but it just proved that he has such a big heart, and that's something JoJo definitely deserves in her potential life partner. Guys, just watch this clip. Seriously. James Taylor is a precious cinnamon roll who must be protected at all costs.

And after everything we've witnessed in Monday night's episode, this dose of sunshine is exactly what we (and JoJo) needed. Chad's gigantic rant about the other guys faking their feelings for her since it's too early to actually know if they love her yet was refreshing and all, but who watches reality TV for the reality? Among the Chad-induced drama that is already happening this season, someone like James is exactly what JoJo needs to balance it all out.

But, even though it's hard to have the kind of feelings that make a marriage last a lifetime this early on, it's obvious that James is really feeling it with JoJo, and it seems like she's feeling it right back. He's so sweet, and I'm totally rooting for him. I hope he's got more moments like this up his sleeve for JoJo. I think she's going to need them!