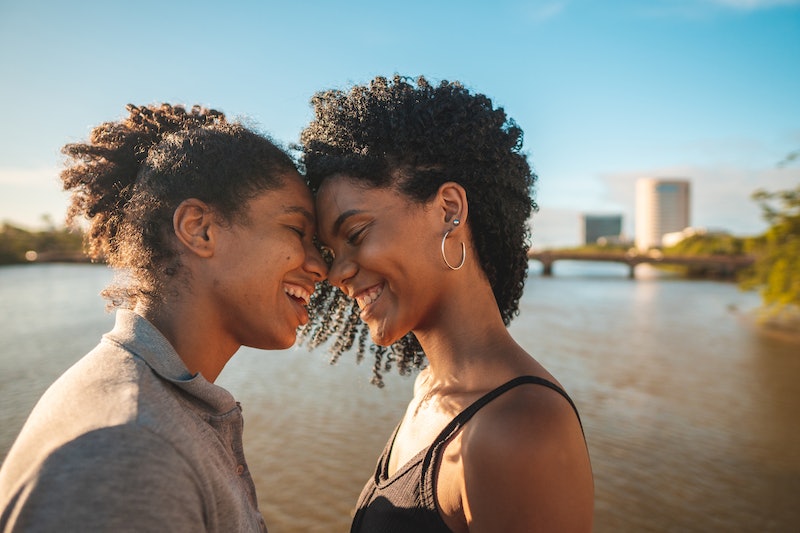 If you've ever heard the term "domestic partner" thrown around, you may have filed it away in your head as something similar to "civil union," or possibly "common law spouse": a status that is somehow different from a "married partner," though you may not be entirely clear on exactly how it is different. The reality is that domestic partnership is a bit of a headache to understand; it's not marriage, but the precise ways in which it's not marriage are slippery and differ from place to place. In the United States, many people believe that domestic partnerships somehow overlap with civil unions, but in reality, it's actually its own distinct legal category with its very own issues. Get ready for things to get (somewhat) clearer.

Even though same-sex marriage is now legal in the United States (hurrah!), it doesn't mean that domestic partnerships will necessarily fall out of vogue. The concept was first introduced as a method of affirming commitment between same-sex couples who were denied the right to marry, but it may still be an option for people who don't want to get hitched for whatever reason. So don't automatically ask anybody with a domestic partner why they don't "just get married." It may not be that simple (and frankly, you have better manners than that).

Here's a rough guide to understanding the differences between domestic partnerships and marriage under U.S. law. It turns out that there are quite a lot of gray areas, beyond the absence of that white dress.

1. Both Marriage And Domestic Partnership Are Legal, Formal Relationship Statuses

Domestic partnerships are, like marriages, state-recognized ways of formalizing a romantic relationship between two people. NOLO's definition is a pretty workable one: "Domestic partners are unmarried couples, of the same or opposite sex, who live together and seek economic and noneconomic benefits comparable to those granted their married counterparts." Eleven states recognize domestic partnerships: California, New Jersey, Colorado, Maine, Maryland, Nevada, Oregon, Washington, Hawaii, the District of Columbia, and Wisconsin.

But beyond that, things get muddy, because the legal rights and requirements of domestic partnerships — and even the wording regarding those rights — are vastly different in different parts of the world and in different parts of the United States; some are nearly the same as traditional marriage rights, while others are much more limited. Beyond the part defining the relationship as involving "two people," basically everything else is up for grabs depending on your location. Cities can also have their own domestic partnership rules; for instance, San Francisco, where the idea of domestic partnerships originated, offers its own definition of the institution that differs from the one offered by the state of California. If anything, the big difference between marriage and domestic partnerships in the United States is that marriage rights are more consistent across the country.

2. The Difference In Benefits And Rights Is Often State-Based

The big area in which domestic partnerships radically differ from marriage (and from one another) is in the area of benefits and protections offered by the state or city. There's no nationwide mandate about benefits for people in domestic partnership, and so those rights are often decided on the state level, or in city charters.

Some places are better for domestic partners than others. In New York City, for example, city employees in domestic partnerships get the same benefits as married ones, and the city charter addresses specifics, like that they offer "an award to a domestic partner of a firefighter, police officer, transit police officer, uniformed correctional worker, sanitation worker, school crossing guard, or any officer or employee of the city killed while engaged in the discharge of duty" that is equal to that offered to married partners. And in Washington, D.C., domestic partners have virtually the same inheritance, alimony, and child care laws as married couples. But if you're thinking about entering into a domestic partnership, it pays to get a very good lawyer and to know exactly what the situation is in your state and your city.

3. In Some Places, One Heterosexual Domestic Partner Has To Be Over The Age Of 62

This is an interesting one. In some states, domestic partnership is open to all gender combinations, while in others they're only available to same-sex partners; but some states offer more unusual limitations — like California and New Jersey, where you're only allowed to enter into a domestic partnership if one of you is over the age of 62. It's not entirely clear why this is the case, though Forbes suggested that heterosexual domestic partnerships might be a way for straight couples to avoid the federal marriage tax penalty, so it may be an attempt to curtail that.

4. They Do Not Automatically Convert Into Marriages When Laws Change

This is one of the most interesting and frustrating parts of domestic partnership, from a legal perspective: Companies sometimes don't have domestic partnerships built into their internal benefits framework the same way they do marriage benefits, so individuals are left to ask for them. The Village Voice was the first company to offer domestic partnership benefits, and many other companies have followed suit, but it's by no means an expected requirement; the Human Rights Campaign has an extensive list of guidance on how to ask your company to provide benefits for your domestic partnership, including questions about protecting your partner's privacy, whether the company has a non-discrimination policy, and tax return issues.

And even if domestic partnership benefits currently exist at a particular company, they might not be in place forever. In 2015, after the nationwide legalization of same-sex marriages, some companies, like Verizon, the Mayo Clinic and IBM, started "rolling back" their domestic partnership benefits, replacing them with spousal benefits or nothing, which is obviously an issue if the couple in question has no intention of getting married. Partners are being given a one- or two-year grace period to choose whether to marry and retain their benefits.

6. The Process For Ending A Domestic Partnership Is Roughly The Same As Divorce

As a legal relationship status maintained by the state, the process of dissolving or terminating a domestic partnership is pretty much the same as getting a divorce; you can file jointly or separately, and the laws of your state or city govern who gets what and what alimony or asset division obligations are. Importantly, you can only terminate a domestic partnership in one of the eleven states that recognizes them, and often have to be resident in that state for up to six months to be able to file. In California, you can dissolve the partnership if it meets certain requirements, like lasting less than five years and involving no kids, otherwise it needs to go to court. In Oregon, meanwhile, it's exactly the same as filing for divorce.

Which just goes to show that while domestic partnership has some important differences from legal marriage, in many ways, it is also pretty similar.