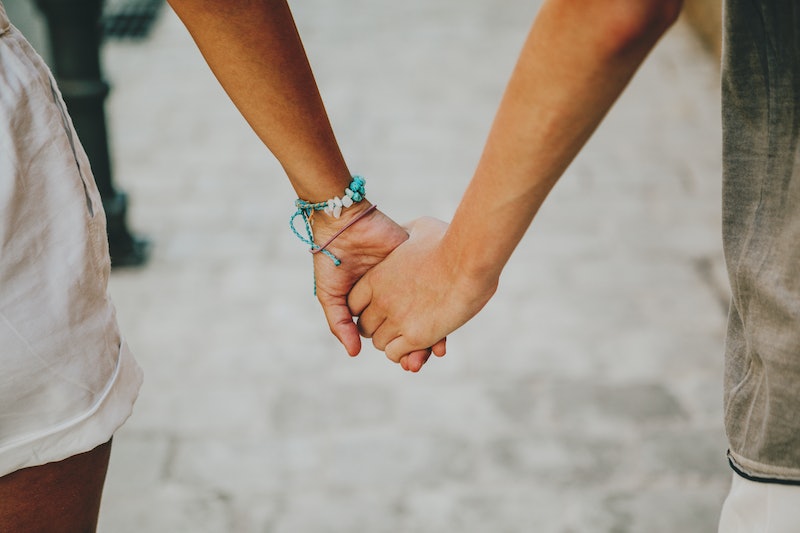 I have mixed feelings about the word “wife.” On the one hand, I like that word, and I love that I get to apply it to myself, because it means that I’m married to my husband, which is something that, almost three years in, I’m still pretty darned chuffed about. On the other hand, “wife” is a term that’s heavy with all sorts of pre-loaded cultural baggage — assumptions about who I am and what I want, and a rather reductive selection of wifely-“types” for me to choose from. And the word “husband” isn’t really any better: it, too, carries a whole set of stereotypes about what married men do and how they behave that aren’t true reflections of reality.

Even for people who consider themselves “progressive,” its easy to get locked into well-worn, gendered clichés in a marriage, especially when everyone from TV characters to well-meaning family members is bombarding you with messages based on deeply embedded assumptions about the “proper” roles of husbands and wives. These gendered tropes about marriage place unrealistic and unfair expectations on both partners and are potentially damaging to the relationship as a whole. (And let’s not forget that some marriages have two husbands or two wives or partners who would prefer to throw out these terms and the tropes that go with them altogether!)

I’m not suggesting that married people shouldn’t let themselves fall within traditional gender roles — that’s a valid choice that anyone is free to make — but we should all be free to choose how we interact with our spouses and the roles we play in our own marriages, without being judged by other people or feeling like there is something wrong with us or our marriages. When we perpetuate gendered tropes about marriage, even inadvertently, we restrict what a romantic partnership can be like and how people can express themselves — and we set up false definitions of what it means to be “feminine” or “masculine.” And don’t most of us just want to be allowed to do our own thing?

Keep reading for 8 gendered marriage tropes we should let go, once and for all:

Many people assume that the woman in a relationship will always be the one who handles domestic tasks, especially cleaning and cooking (though somehow grilling meat is defined as a “man’s task”), and that being a good wife means being able to effortlessly handle all domestic duties (while also raising kids and potentially holding down a job, natch). It’s an old trope, but one that seems to have staying power.

To be clear, if domesticity is your thing — if you love nothing more than keeping a tidy house and replicating the flower arrangements in Martha Stewart Living — then more power to you. There is absolutely nothing wrong or un-feminist about a woman who likes to bake or clean or sew. The problem with the “Domestic Goddess” trope — a trope we see in old black-and-white movies, right on through to contemporary advertising that targets women as the sole consumers of paper towels, diapers, and cleaning supplies — is that it assumes that all wives perform the same role in their households. They don’t. It also perpetuates that idea that if a man performs or — gasp! —even enjoys domestic tasks, which many do, there must be something “unmanly” about him. There is nothing inherently gendered about domestic chores (I doubt one could argue that laundry is an activity uniquely suited to women), so why perpetuate a trope that divides such tasks along gendered lines?

The Handyman is essentially the male reflection of the Domestic Goddess. Just as women are often expected to be adept at domestic stuff, men are expected to be good at fixing things — from plumbing, to broken windows, to cars. And while some guys really are great at fixing stuff around the house, many aren’t. (In fact, I know a number of couples in which the wife tends to be the one who’s better at and more interested in DIY projects). And that’s OK.

There’s an infuriating 2013 clip from Fox, in which Lou Dobbs, Erick Erickson, Juan Williams, and Doug Schoen sit down to discuss a recent survey showing that in four out of ten families, a woman is the primary breadwinner. These four guys have a collective meltdown about the data, declaring that it’s a signal of the breakdown of the American family. Erickson says that to defend women as primary breadwinners is “anti-science” (because, he argues, “When you look at biology, look at the natural world, the roles of a male and female in society, and the other animals, the male typically is the dominant role.”) He also wrote in an article, “[K]ids most likely will do best in households where they have a mom at home nurturing them while dad is out bringing home the bacon.”

This sexist panic-fest may have been an extreme example (and it was ridiculous enough to goad a number of female Fox contributors to speak out against it, including Megyn Kelly, above), but it speaks to a more general assumption in our society that husbands are or should be the primary breadwinners in their households — and that their ability to be so is tied to their value as husbands and as men. That’s a trope that’s outdated, unfair to both women and men, and, moreover, simply false.

One of the most common stereotypes about marriage is that married people never have sex, which is not true. But a common addendum to that cliché is that it’s always the wife who refuses sex, and her poor husband who goes without. The Frigid Wife trope comes out of broader stereotypes that women don’t like sex, and widespread cultural anxiety about women who do like sex. This cliché isn’t fair to women, in that it assumes that if a couple isn’t having sex, it’s the wife’s fault; it casts the wife as the sexual gatekeeper, as if a sexual relationship is something that doesn’t involve two people; and it perpetuates the also-harmful stereotype that “real” men always want sex, regardless of the circumstances.

The Idiot Husband appears often in sitcoms and movies — you know the type: the bumbling guy who can’t really manage to take care of himself, or his children, or… anything, really. And it’s up to his long-suffering, infinitely patient wife to take care of him and keep everything from falling apart. (In the video above, the brilliant and hilarious Sarah Haskins explains it perfectly in Target Women, AKA the greatest segment of all time, RIP). I think a close cousin of this trope is the “Man-Child Husband” — the husband who just can’t seem to get it together and grow up, much to the chagrin of his (usually high-strung, nagging) wife. (See: This is 40).

The problem with the Idiot Husband trope is, first, that it suggests that all married men are stupid, which they are not. It also suggests that men lose something when they get married — that the guy who is cool, active, and independent when he’s single apparently falls apart when he gets hitched. This trope also casts women in the role of perpetual caregivers, as if it’s their job to manage their husbands’ lives for them.

Where would the Idiot Husband be without the Mother-Wife around to take care of him? The wife-as-mother-to-her-husband trope usually features a mature, capable wife (but also often nagging or boring) who keeps her flighty, immature, or bumbling husband in line. This trope (and the bumbling husband trope) isn’t fair to women or men because it suggests that grown men need babysitters (they don’t), and that grown women should always be nurturing and should always have their sh*t together (they don’t).

We’ve all seen the nagging or controlling wife character approximately one hundred bajillion times. This wife is constantly pecking at her husband with things to do, inane chatter, or straight-up insults. This trope arises from a larger cliché — the good old “When a guy is strong-willed, he’s a MAN. When a women is strong-willed, she’s a b*tch” dynamic. In the case of a marriage, the dominant woman is reviled, not only because she’s being “unfeminine,” but also because she’s seen as usurping the natural position of her male counterpart.

The “whipped” or submissive husband lets himself be controlled by his wife (who often falls in the “Harpy” category), and can be found saying “I’ll have to get permission from my wife” at every turn. This character is a common trope in TV and movies, often played for comedy. The “humor” here is rooted, presumably, in the hilariously unnatural act of a male character taking a submissive role, and the ridiculousness of a man not being the dominant player in his marriage.

TBH, I hate this trope. Partially, because it almost always features a woman cast in the role of “controlling hag,” but also because it casts marriage as a competition for power. It assumes that in a “good” or legitimate marriage, a man is in charge, while a marriage dominated by a woman is so ludicrous as to be the butt of a (hackneyed, tired) joke. It ignores the fact that a marriage isn’t about power, or about having someone in charge, or about proving that you are masculine or feminine. It’s a partnership between equals, both unique people who won’t — and shouldn’t have to — conform to gendered clichés about what it means to be a wife or a husband.