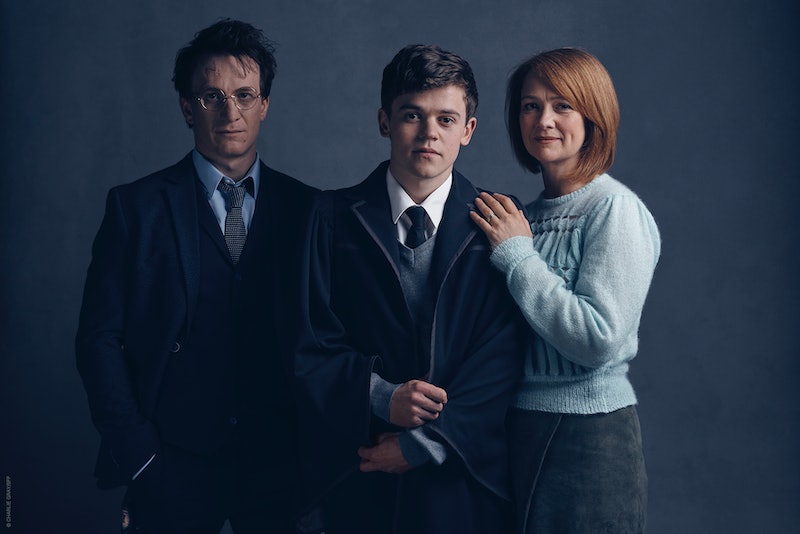 If you were bummed coming to work after a long holiday weekend, this ought to perk your No-Maj brain right up: the first cast photos of Harry Potter and the Cursed Child were just released on Pottermore, and they're about to hit you right in the feels. Remember how at the end of the seventh movie, our faves were awkwardly aged 17 years with movie makeup, and despite our attempts to suspend disbelief we couldn't quite help but think to ourselves, "Nah, that's totally Daniel Radcliffe in his 20s, sorry bro"? WELP, now we're getting a full view of what Harry, Ginny, and Albus Severus Potter would actually look like as their adult human selves, and for some reason this hits home way harder than the movie version did.

The photos released so far include Jamie Parker as Harry, Sam Clemmett as Albus, and Poppy Miller as Ginny. It makes sense that they'd be up in the first round, since J.K. Rowling has divulged that the plot will center around Albus Severus Potter, Harry and Ginny's second son. And although Rowling has more than hinted that this play is going to be a tearjerker, YOU GUYS, THEY JUST LOOK SO CUTE AND FLUFFY. I'm already mad at the idea of bad things happening to them. It just seems rude.

LOOK AT THIS HAPPY FAM.

"He simply is Harry now. There's a kind of relief in watching him, he gets it so right," said Rowling of Parker's portrayal of Harry Potter.

Also, CHECK that lightning scar swag. Of getting to sport the iconic scar and glasses, Parker said, "They’re just iconic. These are stories that people have lived with for their whole lives, they’ve grown up with and now they’re adults re-joining the tale, picking it up where they left off and I’m one of them. In a sense you don’t need more than the scar and the glasses, you kind of go, 'there it is' and I don’t really know how to put it into words, it’s just immeasurably exciting and I can’t wait to show it to people."

Of course, not pictured in the Potter clan are their son James Sirius and their daughter Lily Luna, but Pottermore assures us that there will be updates tomorrow, so it's only a matter of tiiiiiiiime. In the meantime, everybody can proceed to wig out in an unorderly, nerdily fashion.

For more information about the show, hit up the official play website here.

More like this
Harry Potter's Viktor Krum Has Undergone A Huge Transformation Since Hogwarts
By Sam Ramsden and Meguire Hennes
The First 'Percy Jackson & The Olympians' Teaser Comes With An Ominous Warning
By Grace Wehniainen
Nicola Coughlan Shared A Lady Whistledown Excerpt From ‘Bridgerton’ Season 3
By Grace Wehniainen, Alyssa Lapid and Sam Ramsden
Viserys’ Fate On 'House Of The Dragon' Could Differ From The Book In This Surprising Way
By Grace Wehniainen
Get Even More From Bustle — Sign Up For The Newsletter