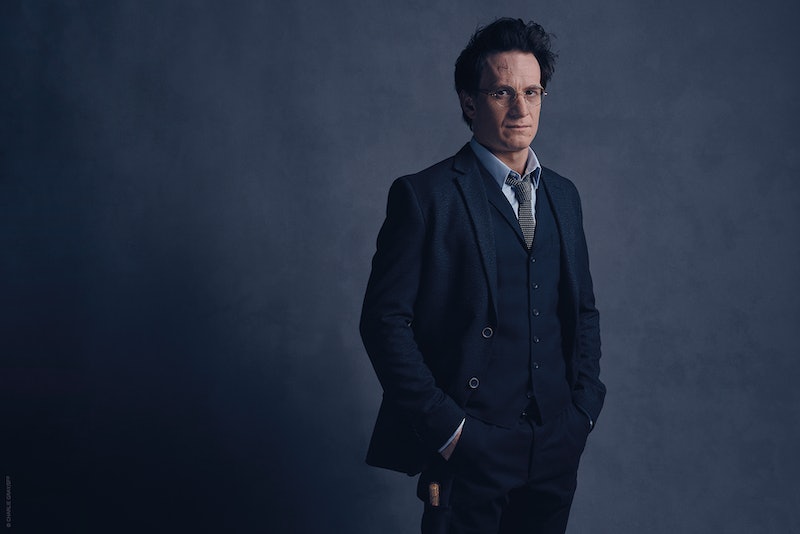 OK, fellow Potterheads, this is not a drill: Pottermore released the first cast photos of Harry Potter and the Cursed Child this morning, and they are everything you dreamed of and so, so much more. So far we have only gotten a glimpse of three characters, but seeing as we woke this morning as just boring No-Majs with boring No-Maj expectations, I'd hazard to say that the Potter gods have been quite benevolent to us on this day. So far we have images of Harry Potter (because of course), Ginny, and their son Albus Severus Potter, who J.K. Rowling revealed months ago is the "cursed child" referred to in the title of the play.

While we can't glean too much information just from these images, certainly not enough to reveal any spoilers, we can still squint and find some hints about what our faves have been up to in the 19 years that have passed between the Battle of Hogwarts and the start of this play. While J.K. Rowling revealed a few days ago that this play is going to be a tearjerker (EVERYONE PLEASE HOLD ME), everyone looks at least mildly content in these images — which means that it's going to take some aggressive fangirl sleuthing to find the tiny cracks of darkness just waiting to fester on stage. Buckle up, y'all, while we cross examine these images one by one.

Not to turn into Rita Skeeter (oh god I am become the thing), but is it just me, or does it look like his eyes are glistening with the ghosts of his past? In all truth, Rowling revealed that this is going to be a dark chapter in the Potter-verse, saying that Harry "grapples with a past that refuses to stay where it belongs". This definitely looks like a man who is past-grappling, if you ask me.

As far as his actual ~look~, the first thing you can't help but notice is that his hairstyle is bold AF and extremely unapologetic about showcasing his scar, in the way Daniel Radcliffe's portrayal of Harry Potter rarely was — particularly in the good old-fashioned floppy hair days that were so aggressively 2004 it hurt. Also, rather than dressing as your stereotypically robed Auror, Harry wears much cleaner, Muggle-friendly attire. This was no accident.

"He’s wearing a suit because he’s a Ministry man, but he’s not just a bloke in a suit, that’s way too anonymous," said Jamie Parker, the actor portraying Harry. "And it sounds strange but we talked around a lot of different suits, because there are suits and suits, and a lot of them we put on and we went 'Mmm, it’s just not right'."

It seems that they nailed the final product — check out that subtle wand pocket in the pant leg! I'm getting one installed in my jeans this instant. (Also low key cackling at his nerve for doing this, because Mad-Eye warned them all upside down and backwards that it was never a good idea to stick your wand in your pant leg. WILL HARRY EVER LEARN?)

Ginny is the only one who seems to be blatantly smiling in any of these pictures, even the main one of the three of them together. I love that her arms are crossed and she seems to have lost none of the sass of her school days or the nerve of her run with the Holyhead Harpies. At the time of the play, she will most likely be working as a Quidditch correspondent for the Daily Prophet. You'll notice that her hair is shorter here than it was back in the days of cracking it like a whip on the Quidditch field, and that was no accident, either.

"So far I’ve had a fabulous haircut and, as this is Ginny’s hair, it’s obviously red and quite sleek," said actor Poppy Miller on Pottermore. "I also get to wear a gorgeous, hand-knitted jumper. I think of it as a really tasteful Pygmy Puff."

Hand-knitted jumper can only mean one thing: Molly Weasley has not slowed down in her grandmother-ing years. Unless, by some miracle, Ginny decided that she was into knitting after some very vocal protestations about it. In any case, this seems to make at least a cameo from the Weasley matriarch seem more likely. Fingers and knitting needles crossed.

LOOK AT HIM I WANNA PINCH HIS TEENAGE CHEEKS. Still, I am low key furious about one very important detail: they have intentionally chosen not to reveal his House colors. The fact that they're still playing coy about that seems to me to be a confirmation that he will be sorted into Slytherin, and that this will be one of the sources of conflict in the narrative. But he also looks so hopeful and sweet and kind that I'm inclined to think that perhaps he could be a Slytherpuff (which I'm definitely biased to think, seeing as I am one myself).

Albus Severus does seem to have come a little bit of a ways since his nervous separation from his parents boarding the Hogwarts Express in his first year, but perhaps not far enough to truly come into his own yet.

"This is what Albus wears at the start of the show," said actor Sam Clemmett on Pottermore. "I had the idea he was wearing James’s — his older brother’s — hand-me-downs. So I wanted him to feel quite uncomfortable, and be able to play with his clothes."

I guess this would maybe skew toward him being a Gryffindor, but the generic robes could belong to any House, so I'm still holding out. And it is apparent that Rowling really wants us to, because she is so cognizant about spoiling it for anyone that, aside from saying Clemmett was cast perfectly, she didn't reveal a single thing about his character. I'm still holding out for a BFF-ship with Scorpius Malfoy, y'all, but I know better than to question Rowling on anything so I will take what I can get.

Awww, Albus Severus is all grabbing his sleeves like the awkward precious duckling I am fairly certain he is going to be. I do think it's a little ominous the way Harry is standing in the background, decidedly less affectionate than Ginny and very closed off with his hands in his pockets. True to Rowling's word, I definitely sense some father-son tension on the horizon.

Look, guys, I just want everyone to be OK, and that's including me. But I also want to get wrecked emotionally because I'm a Potterhead and that is what we do to ourselves. Crucio my heart. I'm READY.

For more information about Harry Potter and the Cursed Child, check out the official site.

More like this
This Episode 6 Moment Foreshadows Viserys' Fate On 'House Of The Dragon'
By Grace Wehniainen
Nicola Coughlan Shared A Lady Whistledown Excerpt From ‘Bridgerton’ Season 3
By Grace Wehniainen, Alyssa Lapid and Sam Ramsden
Read The First Pages Of Emma Rosenblum’s Highly Anticipated Debut, 'Bad Summer People'
By Samantha Leach
Everything You Need To Know About ‘Black Panther: Wakanda Forever’
By Bustle Editors
Get Even More From Bustle — Sign Up For The Newsletter