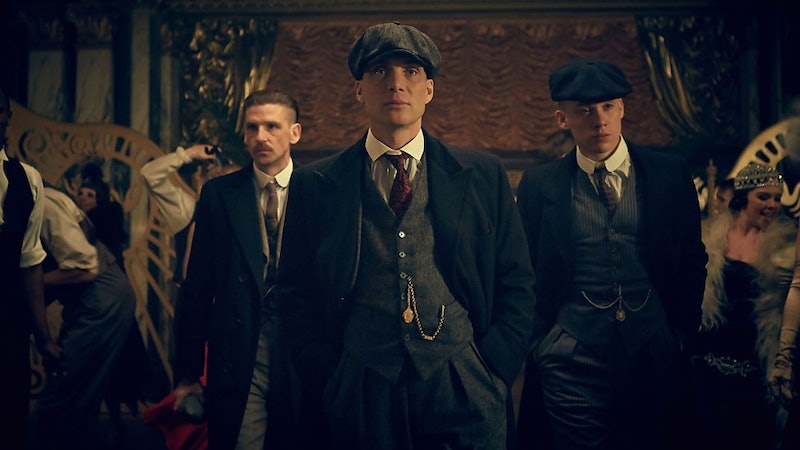 After you watch Peaky Blinders, it's natural to compare the show to Boardwalk Empire. Both series take place in similar time periods, and they both focus right on the border between criminal activity and public life. Boardwalk Empire was based on a real person, Enoch "Nucky" Johnson, and also pulled in a bunch of other real-life characters, like Arnold Rothstein, Al Capone, and Lucky Luciano. So, is Peaky Blinders based on a true story?

Yes and no. The Peaky Blinders were a real gang, which makes me feel better because, if you were going to make up a name for a gang on a TV show, "Peaky Blinders" is a real weird one. It's too strange to not be true. But legend has it that the name came from the razor blades sewn into the peaks of their caps, which they'd use to blind rival gang members during fights (Bloody!). According to the Daily Mail, the gang worked in Birmingham's Bordesley and Small Heath neighborhoods from the 1880s to the 1900s. And by "worked," I mean activities theft, mugging, illegal betting, racketeering, and dealing in black-market goods, not to mention generalized violence, according to records released by the West Midlands police to the Daily Mail. Let's just say they were a tough crowd.

They may seem like gangsters straight out of a movie, but show creator Steven Knight told the BBC he had a very real memory of the Peaky Blinders and his family, which inspired him to create the show. He said:

"My parents, particularly my dad, had these tantalising memories of from when he was nine or 10 years old of these people," he said. "They were incredibly well dressed, they were incredibly powerful, they had a lot of money in an area where no one had money and... they were gangsters! In a way I want Peaky Blinders to be a sort of the view of this world through the eyes of a 10-year-old because the men are smarter and stronger and handsomer and the horses are bigger and everything is big and intimidating as a kid."

Yet, as with most TV series, the show has taken some artistic license. "There was no real Tommy Shelby and the Peaky Blinders were around in the 1890s and yet the series is set in the 1920s," historian Carl Chinn, author of the book The Real Peaky Blinders, told the Birmingham Mail. (Chinn also doubts the legend about the razor blades, saying in the same interview that they were too expensive at the time.) He did, however, reveal that Season 1 rival Billy Kimber was a real person. "Kimber was a very intelligent man with a fighting ability, a magnetic personality and a shrewdness of the importance of an alliance with London," Chinn said.

Some of the places are real, too — and still exist, such as The Garrison, the bar that acts as Peaky Blinders HQ. It's there, actually, that Cillian Murphy tried to learn that unique Birmingham accent, as Knight told Den of Geek. "When I took Cillian [Murphy] up to the real Garrison, which is in Small Heath, to meet some of the people I know from round there, we spent quite a drunken Saturday just talking, and he recorded it on something like that [points to my Dictaphone], and just got into the accent," Knight told the site.

"The trick with it — which he spotted and the other actors spotted — was that it’s fast. Everybody does it slow for some reason, but the actual town accent is really fast and if you do it quick, you’re doing it. It’s like riding a bike, as long as you keep going, you’ll be alright." So that's something about Peaky Blinders that's definitely authentic, but the rest is a mix — a fictionalized television show that borrows elements from real history.

More like this
At 14, Melissa Barrera Was Planning Her Quinceañera & Falling In Love With Musical Theater
By Gabrielle Bondi
Watch The Trailer For Netflix’s Edgy New Comedy 'FAKES'
By Brad Witter
Does 'Locke & Key’s Ending Mean There Could Be A Season 4?
By Sophia Moore
What’s New On Netflix: 'Never Have I Ever' & 'Indian Matchmaking' Return
By Arya Roshanian
Get Even More From Bustle — Sign Up For The Newsletter