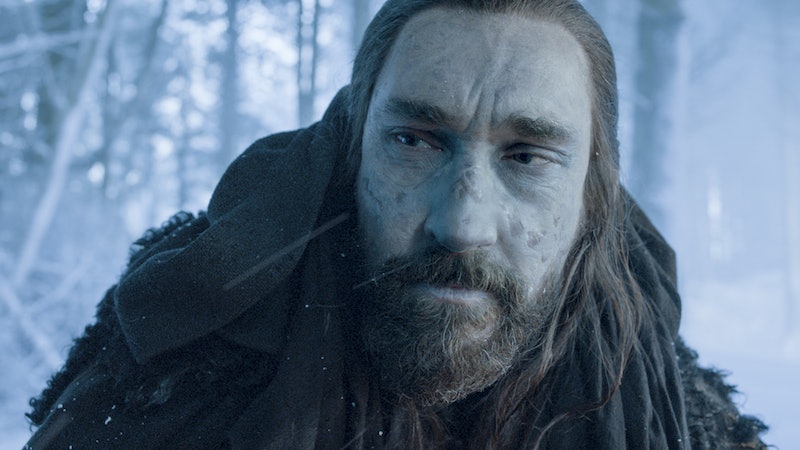 Two mysteries were solved at once recently on Game of Thrones. Fans of the HBO show discovered Benjen Stark’s fate and Coldhand’s identity — to be clear, Benjen is Coldhands on the TV series. But, with the show often combining storylines or killing off characters that are still alive in the A Song Of Ice And Fire book series, some Game of Thrones fans are speculating that the novels may take things a different way. Will Benjen Stark be Coldhands in the books?

The show has surpassed the latest the A Song Of Ice And Fire book, A Dance With Dragons, so Benjen’s fate in the series is yet to be revealed — which means he may very well be Coldhands. But some fans are wondering if the HBO series is combining the characters of Benjen and Coldhands, like they did with Jeyne Poole and Sansa Stark in the Ramsay Bolton wife storyline. Could Coldhands actually be another man in the books, with a backstory unimportant to the trajectory of the show? Or could he be someone who helped Benjen survive north of the Wall, so the show just combined the characters? Basically, fans are doubting the whole "Benjen is Coldhands" thing because of something George R.R. Martin once said.

In a previous article I wrote for Bustle exploring the whole “Benjen is Coldhands” theory, I talked about how Martin himself seemingly debunked the speculation, according to a Latin Times article.

A reddit user [honeybird] discovered some handwritten notes on an original manuscript of A Dance With Dragons which is housed in the Cushing Library of Texas A&M. The margin notes were between Martin and his editor Anne Groell. In one note, Groell asks if Coldhands was Benjen, and Martin responded with a definitive, "No."

There was a reason Groell supposedly asked this question in the first place. Fans have been curious for years about whether Benjen and Coldhands were one in the same. And, the reason so many speculated about “Benjen is Coldhands” is because the books lead readers to speculate that Coldhands is a fallen brother of the Night’s Watch, because he wears similar clothing to members of the Night’s Watch and helps members of the brotherhood.

So, maybe George R.R. Martin was messing with us? Maybe Benjen is Coldhands in the A Song Of Ice And Fire book series. Or maybe Benjen’s fate will be something completely different once the pages are inked. But considering that fans are in an interesting position now of watching the stories unfold before reading them, it’s fun to consider how things may play out differently on the page.