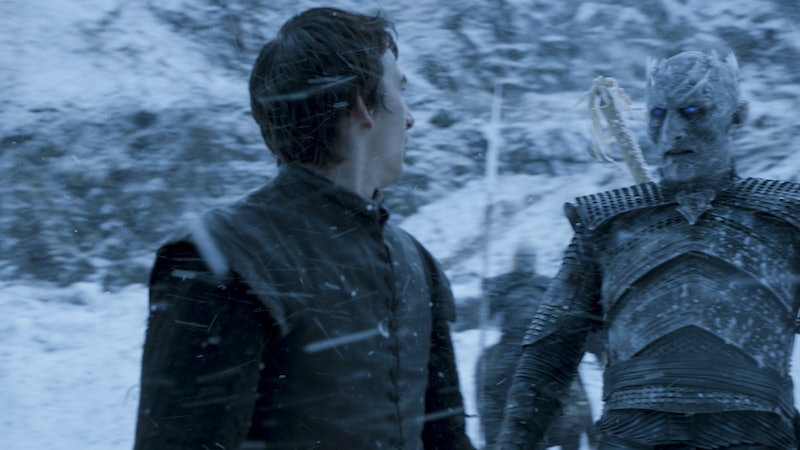 Just because Hodor's time protecting Bran was finished in "Hold the Door" on Game of Thrones, Meera's time was not. She was overcome by wights in "Blood of My Blood," but thankfully, she and Bran were rescued by a hooded figure. So who saved Bran on Game of Thrones? Fans on Twitter think they already solved the mysterious story line of the man on the horse wielding a flaming ball and chain that took down a hefty number of wights — that it was Benjen Stark, Bran's uncle. Game of Thrones has already given fans one Stark reunion in Season 6, so would they possibly bless fans with another? If the hooded figure is indeed Benjen Stark, then his appearance could also introduce the book character of Coldhands, a character many readers believe is Benjen.

As Game of Thrones has been tying up story lines so much in Season 6, it was almost surprising that the rider who saved Bran and Meera actually was Benjen. With his return will most likely come discussions of the book fan theory of Benjen being Coldhands, even though George R. R. Martin has already denied the validity of this theory, according to Latin Times. But, how Benjen was dressed isn't going to calm down people who still think it could be true. Plus, the fact that Benjen was almost turned into a white walker but was saved by the Children of the Forest plunging dragon glass into his heart almost gives even more proof for the Coldhands-Benjen theory.

In Martin's books, Coldhands is a being who helped Bran, Hodor, Meera, and Jojen arrive at the Three-Eyed Raven and he is dressed in tattered clothes of the Night's Watch with his face covered by a scarf — very much like how Uncle Benjen was dressed when he saved Bran and Meera. However, the main difference between Coldhands and Benjen is that Coldhands tells Bran that he's actually dead. While Benjen may technically be half White Walker, he still seemed very much alive from my perspective.

The best explanation I can come up with is that Benjen is the show's adaptation of Coldhands and that Coldhands most likely won't exist in the world of HBO's Game of Thrones like he does in Martin's A Song of Ice and Fire books. Benjen — at least as Benjen and not Coldhands — has not appeared in the books since the first novel in the series. So Game of Thrones could be running with their own version of Martin's story in which Benjen is a take on Coldhands. Entertainment Weekly confirmed that Benjen is Coldhands on the show.

Regardless of what name viewers want to call him, Game of Thrones fans have a reason to celebrate because Uncle Benjen is back — and hopefully to stay since Bran and Meera need all the help they can get.