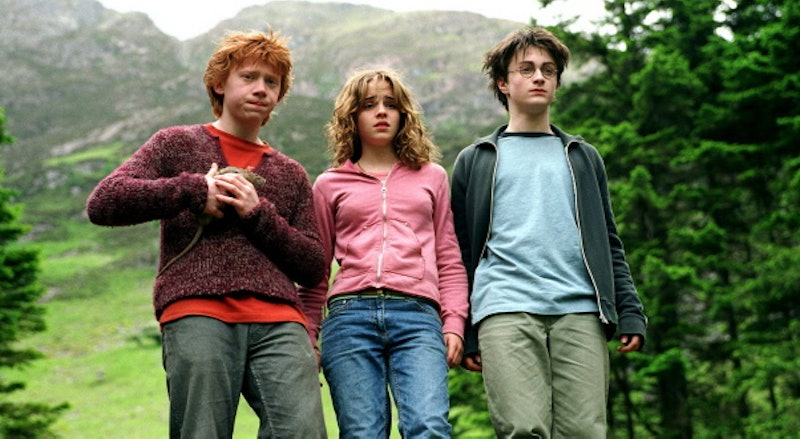 I’ve wasted several hours (days, weeks, months) of my life marathon watching every Harry Potter movie, so it always shocks me to come across a non-fan. Of course, my instinct is to urge a Potter virgin to read the books, but you know that’s not an easy sell in 2016. The back-up plan? Get them to watch the best Harry Potter film out there: Harry Potter and the Prisoner of Azkaban. Because, I have to say, Prisoner of Azkaban really showcases the best of Harry Potter .

"But Mary Grace," you're shouting at your computer screen. "Prisoner of Azkaban isn't even really about Harry's struggle with Lord Voldemort. If anything it delivers some ridiculous CGI magical beasts and some light misinformation about the Marauders, not even." Girl, exactly. Hear me out. The Prisoner of Azkaban is such an intriguing installment because it gives us a quick breather from the usually subplot of "Voldemort's trying to come back and kill everyone I love" or "Voldemort's already back and trying to kill everyone I love." No, no, no. The Prisoner of Azkaban is great, because, when you take out all the fantastical layers, there's a really human tale in here.

First of all, there's a real terror in the Dementors that you don't often find in Harry's arch-rival, Lord Snakyface. They're Grim Reaper-esque, with emphasis on the "grim." You understand why Harry would be afraid of these. When he finally banishes them with his mega-Patronus it's one of the coolest (and most satisfying) visuals in the whole goddamn series. And we're so proud.

Then you have the varieties of exciting magical trappings that really just add to the film. Buckbeak is a wonder to behold on his own, but it's really something else when we get to witness his rescue through the Time Turner. Hermione's classwork-maximizing device tacks on a very high-energy final act to Prisoner of Azkaban. Really, as far as the story goes, the Prisoner of Azkaban is one of the films that's easiest to swallow.

A quick way to put this into perspective is that The Prisoner of Azkaban is amazing for all the ways that The Order of Phoenix is not. It's the first adventure of the teenagers as a trio, so it still reads as a child's movie without feeling completely sophomoric. Harry has a lot of rage bubbling up during that whole "He was their friend!" outburst; it's the first time we see any venom in him. By the time we get to The Order of the Phoenix, however, Harry is nothing but a fountain of pubescent anger, and you just want it to stop gushing for one second.

And it has to be mentioned throughout this that Lupin makes for the greatest Defense Against The Dark Arts professor. There's such a delight in seeing Harry and his classmates actually learning and, more importantly, confronting their fears. But it isn't just that; Lupin fills the much-needed role as a mentor and quasi-father figure to Harry. He trains him to become a better wizard, to build up a resistance to the Dementors. There's so much nurturing that Harry lacks from his life with the Dursleys.

The movies, in general, don't really expand too deeply on Harry's parent's backstory. (I'm not really sure how, they managed to make a whole film about camping. It's just how it is.) All you get a lot of hearsay in Prisoner of Azkaban, the lightening-quick flashback in Order of the Phoenix, and Snape's full backstory. The latter things are obviously disappointing, maybe because we're looking at it through Snape. It hurts learning that the Marauders were bullies in a Draco Malfoy kind of way. It hurts learning that Lily Evans had brown eyes (seriously, what the hell), and, um, all that other nonsense about Snape's terrible life.

Yet everything we learn about Harry parent's past in Prisoner of Azkaban, even if it's little details tacked onto the end (and it pretty much is), is a delightful revelation. Harry and his friends were cool ass rebels just like him. Harry has a godfather who isn't a murderer and traitor like we thought. It's all very hopeful.

And that hope is a big part of the over-arching reason Prisoner of Azkaban is so great. You can definitely see the darkness creeping into the franchise, but this is still just before shit hits the fan. There's still innocence and happiness and the promise that things might get better. Nobody dies, not even the hippogriff.

Throw in master actor Gary Effing Oldman as the wonderfully exciting Sirius, and you've got yourself an A+ adaptation, my friends. So, yes, it's perhaps not the most traditional Harry Potter plot (You-Know-Who is barely whispered throughout), but it exists wonderfully as the eye of the Harry Potter storm. There is that whole thing about Hogwarts not being safe (when is it ever) and plenty of cloaked joy-killers. All the while Harry is beginning to brew up his own demons, ever so slowly. But you know what? It's still a weirdly happy time in the Potterverse, and one worth celebrating. Through all the blackness, Prisoner of Azkaban can be a light treat for anyone trying to dip their toe into this world of magic.