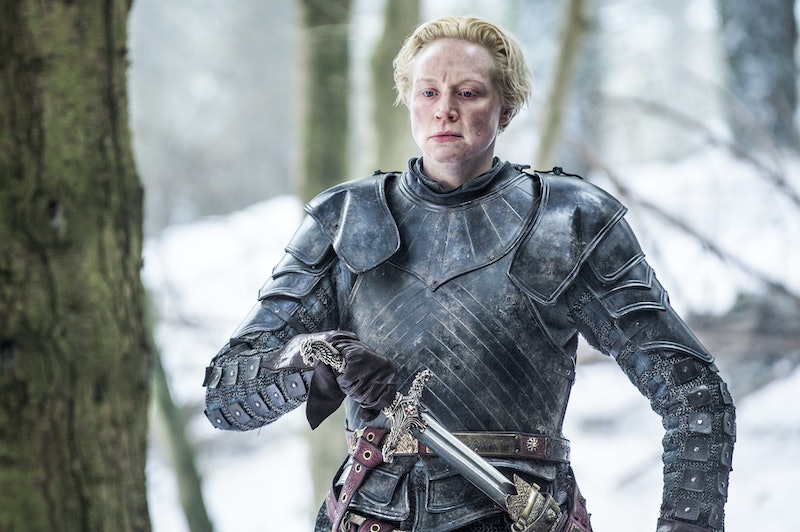 A new ship is taking over Westeros — but I'm not talking about a wooden, seafaring ship. No, I'm talking about the relationship between Brienne of Tarth and Tormund Giantsbane, which began when she arrived at Castle Black and he started making eyes at her while taking a bit from a chunk of meat. You know, normal courtship things. But, maybe we shouldn't allow this 'ship to conquer Westeros for the sake our lord and savior Brienne of Tarth. In fact, here are seven reasons we shouldn't 'ship Brienne with anyone on Game of Thrones.

Sure, I'm susceptible to the power of Brienne and Tormund because as far as I can tell no one is immune to the obvious and endearing interest the Wildling shows in our favorite warrior. Even the actress who portrays Brienne, Gwendoline Christie, has boarded the Tarthbane 'ship, as she told Entertainment Weekly, and loves the idea of the Wildling and Warrior pairing. Plus, considering the fact that Ramsay Bolton is still alive on Game of Thrones and going about his merry murderous ways, I won't deny we all need something good and pure on this show in order to keep watching sometimes. However, there are also many reasons why we shouldn't succumb to this 'ship, and I've laid them out here.

One of Brienne's best qualities is her loyalty to those she serves and right now that person in Sansa Stark, who can use all the protection and help Brienne can offer.

She Has Important Things To Do

Brienne is on a mission to help Sansa take back Winterfell and the North from Ramsay Bolton, and that is more important than making eyes at a handsome red-headed Wildling.

Do you think helping Sansa take back the North will be easy? Definitely not. Ramsay has already proven to be a resilient cockroach, and we don't need Brienne getting distracted by some sort of romance.

She Doesn't Need A Love Interest

My qualm isn't only with Tormund because he isn't the first character fans have 'shipped Brienne with (I see you, fans 'shipping Brienne with Jamie Lannister or Sansa Stark). But, Brienne doesn't need a love interest to be interesting. In fact, it could be refreshing to have a character without a romance!

So far, Brienne seems pretty uncomfortable with Tormund's interest in her, and perhaps it's because she has no interest in pursuing a romantic relationship. I can't blame her for wanting to avoid romantic ties, because on Game of Thrones...

Sure, certain characters are currently in relationships on Game of Thrones that are going OK — Jamie and Cersei, Sam and Gilly, just to name all the ones I can think of off the top of my head — but in general they tend to end with one party dying. I can't stand to see Brienne heartbroken (because obviously she wouldn't be the one dying) so perhaps it's better if she focuses on something else — like saving Westeros.

She's Brienne of Tarth! She does her own thing and that's part of why we all love her.

So, I understand why everyone is getting swept up in Tarthbane, but Brienne is a kick butt hero on Game of Thrones and she doesn't necessarily need to be in a relationship for her to be the best part of this show. So I don't think we should be 'shipping her with anyone.

More like this
Netflix Shut Down 'Bridgerton' S3 Rumours About A “Very Dark” Storyline
By Bustle
Bill & Frank’s 'The Last Of Us' Episode Has Twitter Emotionally Wrecked
By Alyssa Lapid
'GoT' Star Emilia Clarke Says She "Just Can't" Watch 'House Of The Dragon'
By Brad Witter
Everything To Know About The 'Daisy Jones & The Six' TV Series
By Maxine Harrison and Brad Witter
Get Even More From Bustle — Sign Up For The Newsletter
From hair trends to relationship advice, our daily newsletter has everything you need to sound like a person who’s on TikTok, even if you aren’t.