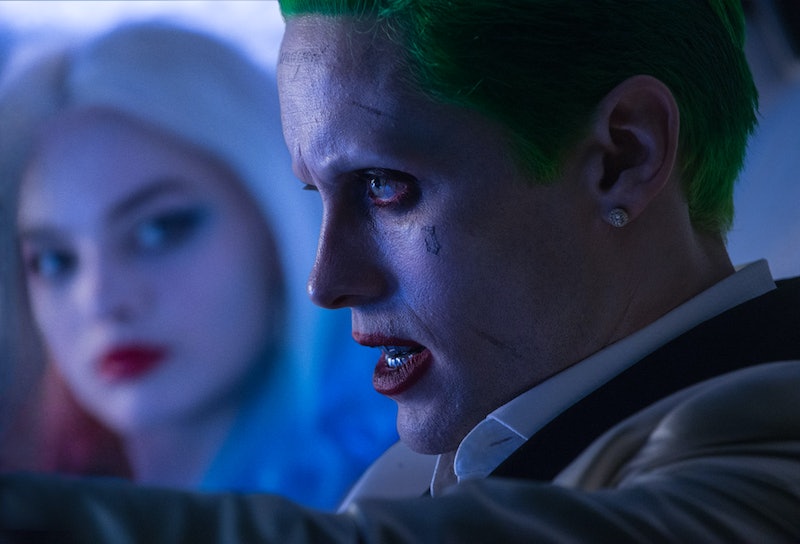 To say they are a dysfunctional couple is a gross understatement. DC Comics' Harley Quinn and The Joker are, well, pretty effed up. He's a super villain who is locked up for mass murder, and she's the psychiatrist who falls in love with him, then turns to the dark side, too. Suicide Squad, directed by David Ayer and starring Margot Robbie as Harley Quinn and Jared Leto as Joker, will offer fans of the comics an inside look into the couples' dark beginnings. And when I was on the set of the film in June of 2015, I learned some of the couples' twisted secrets from the Harley Quinn actor herself.

It's widely known that Leto, who gifted his co-stars a dead pig, a live rat, and bullet casings, is a method actor. But for Robbie, who is not, getting through to her co-star and on-screen love interest was more than challenging. In order to connect, she employed tactics Quinn herself might utilize. "He's in character all the time," Robbie says of Leto. "I spent a lot of time trying to figure out their relationship. Because he's got his facade up, it was really hard for me to get through to him at first. So I was like, OK, I gotta [approach] this as if I am trying to crack the Joker."

And that's exactly what she did. "I ended up looking into MMPI testings," she says. Minnesota Multiphasic Personality Inventory (MMPI) is the most widely used psychometric test of adult personality and psychopathology. "It's a test that psychologists use to determine what mental illness people might have. It's a list of 500 questions or something. Whenever we had time to rehearse or improvise, or even in the scenes, I'd just start with those questions," she says. "Some of them are basic, and some of them are not. [I'd] see which ones would catch him off guard, how he'd react, and I'd be like, 'OK, I'm gonna go for this tactic now. It's a lot of trial and error."

Robbie likens her character's relationship with The Joker to dating an addict. "It's kinda like when your friend is doing something stupid in a relationship, and you're just so frustrated. You're like 'What are you doing? Why?'" she says. "I landed upon codependency as the tact to take... It's like a compulsion, I suppose. When you start looking at it the way an alcoholic is compelled, you know, needs to have a drink. You think of it in those terms, like it's an actual psychological problem, which codependency actually is."

So did Robbie "crack" the Joker? Unfortunately, audiences will have to wait until August 5, when Suicide Squad hits theaters, to find out.