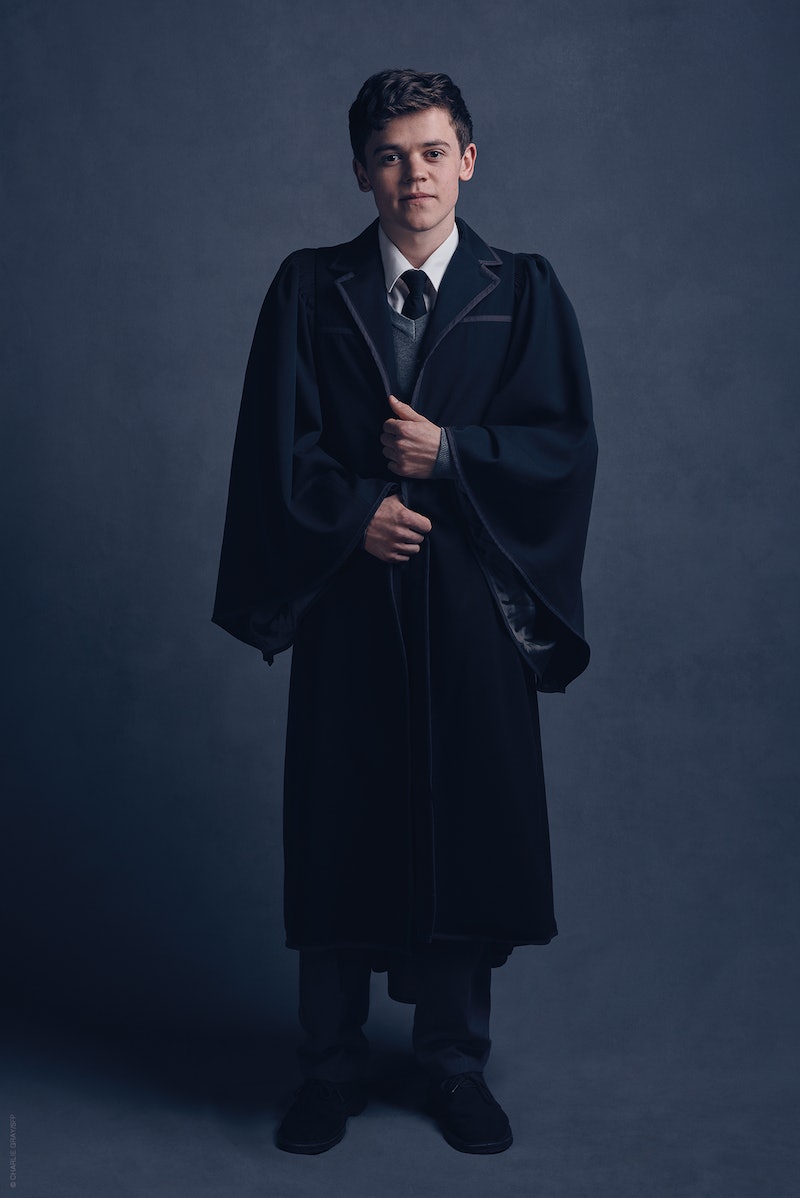 Merlin #bless us all. The internet has been in quite a stir today since the release of the first cast photos from Harry Potter and the Cursed Child . But while we were freaking out, we might have missed one very important plot detail: namely, Albus Severus's robes in the photos. In fact, it might be one of the biggest Harry Potter and the Cursed Child spoilers to date.

I will say up front that this is all speculation on my part — if there were actually spoilers out there on the internet, believe me, I'm the last person you'd be hearing from. I believe in the sanctity of fandom, y'all. But since this is out there in the open and I am appointing myself No-Maj Nancy Drew of the day, I can't help but notice that Albus Severus Potter's school robes are missing one incredibly important detail: a Hogwarts House. He has no scarf, emblem, or tie bearing the colors of any of the known Houses — which trust me, my friends, was not an accident.

And if there was any doubt about that, we can take it straight from the horse's mouth. "There's much I could say about Sam-as-Albus," said J.K. Rowling in praise of Sam Clemmett, the actor playing Albus, "but we'd be into spoiler territory, so quickly I'll just say we couldn't have cast better."

Spoiler territory, hmmmm? Spoilers like the fact that Albus Severus Potter, son of Harry Potter and Ginny Weasley, is actually a Slytherin?

Before I delve any deeper into this theory (and trust me, friends, I will delve), I should admit that there is one minor thing that might dispute it. Sam Clemmett says of the costume and his stance in the image: "This is what Albus wears at the start of the show. I had the idea he was wearing James’s — his older brother’s — hand-me-downs. So I wanted him to feel quite uncomfortable, and be able to play with his clothes."

Hand-me-downs from James Potter would, of course, imply that he was wearing Gryffindor robes. But when you think about it, all the first years go in with unmarked robes that they buy in Diagon Alley. Only after they are sorted do they wear the colors of their house. One might argue that this is a picture of Albus pre-Sorting, and that it doesn't really tell us much at all.

But here's the thing: That doesn't make this any less deliberate, nor does it make J.K. Rowling's silence on Albus's sorting any less deliberate. And when you examine all the other little shreds of evidence that are piling up, a Slytherin Albus doesn't seem like a possibility, but an inevitability.

"What if I'm in Slytherin?" The whisper was for his father alone, and Harry knew that only the moment of departure could have forced Albus to reveal how great and sincere that fear was. Harry crouched down so that Albus's face was slightly above his own. Alone of Harry's three children, Albus had inherited Lily's eyes.

“Albus Severus," Harry said quietly, so that nobody but Ginny could hear, and she was tactful enough to pretend to be waving to Rose, who was now on the train, "you were named for two headmasters of Hogwarts. One of them was a Slytherin and he was probably the bravest man I ever knew.”

First and foremost, J.K. Rowling has never, for one instance in the entire time she's written Harry Potter, given us superfluous information in scenes of this magnitude. Things that we had no earthly idea would have relevance to the plot were often brought back in books published a decade later. That Albus had the same anxiety his father did at his age was no accident, and I fully believe that Rowling was using that scene to foreshadow that he would become a Slytherin — even if she had no plans to write Cursed Child at the time. In fact, it might have been this scene which inspired her to write the play in the first place.

But more importantly, Rowling left one huge, gaping hole in the wake of the final book: the redemption of Slytherin. We see just how pervasive the stigma is on their house even 19 years after the war. The fact that Harry was so adamant in defending Slytherin seems in some way to seal Albus's fate to redeem the house in the aftermath of the war. But more on that later, because I have specific things to say about that, too.

Albus getting sorted into Slytherin wouldn't be so much nature versus nurture as it would be nature and nurture. For instance, we know that being a Slytherin could arguably be in his nature; Harry himself was almost sorted into Slytherin. But when you consider that Albus Severus has lived his life in the shadow of not just the golden child and Gryffindor James Sirius, but an impossibly huge family legacy and the namesake of two of the most controversial wizards in history, it only makes sense that he would crave an identity that was all his own. And that exact desire is what breeds cunning, ambition, creativity, and resourcefulness ... in other words, the perfect recipe for a Slytherin.

In case there were any doubt that these were the very struggles that Albus will face in the play, refer back to the sparse information J.K. Rowling released about the plot in 2015:

One way past and present would fuse ominously? Having your kid sorted into the very House that nearly every one of your enemies emerged from, and having that son try to reconcile that with the burden of his family legacy. It's gonna get real dark in here, y'all, and I'm not even done explaining why yet.

There Is A Very, Very Strong Possibility Of A Plotline Involving Scorpius Malfoy

We know from a tweet J.K. Rowling sent out showing the specs for Draco Malfoy's wand that he is a confirmed returning character for the play. That means that one of these adorable grinning kids is without a doubt a young Scorpius Malfoy — who, by the way, is in Albus's year, and almost guaranteed to be in Slytherin. Hence, past and present fusing again in a big way.

I'm further convinced that Scorpius will play a role in this because Draco Malfoy, despite that cordial enough scene on the train platform, was never truly redeemed in the series. We know that he doesn't have a job, per se, and spends a lot of the time puttering around the Malfoy mansion and examining the family's dark artifacts (although it is mentioned that he doesn't use them). We know that he has seen the error in his ways, and that his parents actually disapproved of his marriage. It is implied through these small insights that Draco Malfoy has changed, but still, the secondary "villain" in Harry Potter's life — the one who is instrumental in stirring a lot of the awfulness in the sixth and seventh books — never finds redemption.

Personally, I think this will be addressed by an enemies-turned-friends relationship between Albus and Scorpius. This will somehow come full circle between Harry and Draco, forcing to address their own issues and demons. Albus being sorted into Slytherin would naturally facilitate most of this.

This is what I think happens. We know that Teddy Lupin, Harry's godson, is a Hufflepuff. We know that James Sirius Potter was sorted into Gryffindor. I have every belief that Albus will be sorted into Slytherin, and that it's very likely that Lily Luna Potter will be sorted into Ravenclaw. That way, every child (even the non-biological one) of Harry Potter will end up in a different house, as some way of unifying the Houses. This is the closure fans have been looking for since the Battle of Hogwarts, finally sealed by the legacies of our heroes. The stigma of the past will finally start to lift, and Albus Severus will be the champion of it all — and through that, finally freed by the legacy of his family by creating a legacy of his own.

For more information about Harry Potter and the Cursed Child, check out the official website here.