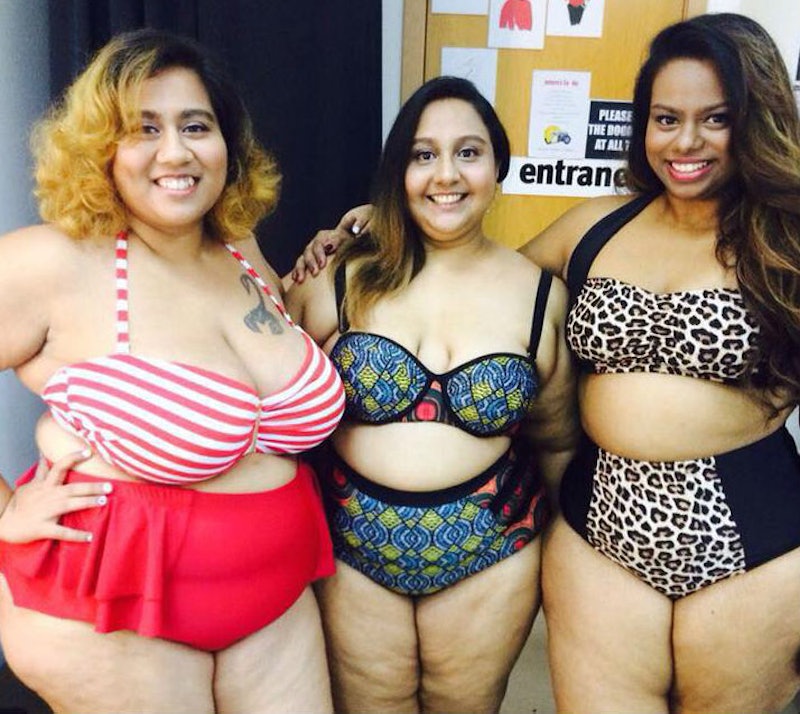 In the June 2016 issue of the Singapore-based fashion magazine, CLEO, three plus size women posed in bikinis. But things took an interesting turn when blogger Aarti Olivia Dubey shared a behind the scenes snap and the photo was removed from Instagram.

Dubey, who writes both for her own blog Curves Become Her and Wear Your Voice Magazine, tells me via email that she got into blogging to inspire both herself and others. By blogging as a plus size Asian woman, Dubey helps to bring visibility to a community that she says is rendered invisible or despised. The article she penned for CLEO about body positivity and swimwear was the first time a plus size person has written an article in a local Singaporean publication.

"The inspiration was for Singaporeans to realize that there is not just one type of body that wears swimwear," says Dubey. "Plus size women, women of the minority races in Singapore enjoy wearing bikinis as well and I spoke about what led me to finally being able to embrace myself in a bikini."

Dubey invited fellow plus size bloggers, Ratna Manokaran and Rani Dhaschainey to pose alongside her for the shoot accompanying the article and she shared images from both the magazine spread and behind the scenes. According to Dubey, one image in particular caught the attention of Instagram users and the negative comments rolled in. She woke up on May 23 to find that the image of herself, Manokaran, and Dhaschainey had been removed.

The notification from Instagram told Dubey that her image violated Instagram's community guidelines and was removed. Dubey says that she was not given much of an explanation or a way to challenge this removal. With a following of more than 14K on Instagram, Dubey took to her page to share her outrage.

According to Instagram's guidelines, nudity including "digitally-created content that show sexual intercourse, genitals, and close-ups of fully-nude buttocks" as well as "some photos of female nipples" is not permitted; however, Dubey's image featured three fully-covered women. On May 31, after the image had been shared on Facebook and gotten some media coverage, Dubey received another email stating that the image had been removed as a mistake and had since been restored.

“We mistakenly removed a photo and we apologize for the inconvenience caused," an Instagram spokesperson shares with me via email. "We worked quickly to rectify the mistake and have already taken steps to prevent this from happening in the future.”

Instagram was simply the platform from which this image was removed, but this isn't the first time that a societal stigma towards visibly fat bodies has manifested via social media. Just look at Project Harpoon's time on Facebook or Reddit's Fat People Hate forum created by individual users and both eventually removed by the platforms. Project Harpoon lived on for a few days while Fat People Hate lasted years before its removal. These examples and others have shown that discrimination and stigma against certain individuals manifests itself on social media. Facebook's guidelines for hate speech list attacks against race, ethnicity, national origin, religious affiliation, sexual orientation, sex, gender, or gender identity or serious disabilities or diseases. Though it's still a gray area, fat shaming doesn't explicitly fall under the written guidelines of what is considered harassment, hate speech, or online bullying on social media.

At the urging of friends and fellow folks in the body positive community, Dubey says she immediately reposted the same image across her social media platforms after it was originally removed from Instagram. She says she received an outpouring of support. On Facebook, the image received more than 2,300+ shares and amassed more than 3,000 likes on Instagram.

"I wasn't expecting the overwhelming support and reactions, I was simply an angered plus size woman who wanted answers," says Dubey. "The image did not violate any of the community guidelines stated, the fact that people hate us so much made me feel sick of the constant rejection and judgment placed upon fat folk."

Manokaran was also upset and surprised that the image was removed. She tells me via email that she credits the image's removal to the fact that some people still feel as if plus size women are not entitled to celebrate or be happy with their bodies.

"I think that people still connect swimwear to someone who is of an 'ideal' body type," says Manokaran. "Even in the plus community, people are more willing and open to see curvy women as opposed to fat women. Let's look at even the way the word is used, like fat is bad and curvy is OK."

The image and its removal sparked an interesting debate and made people who may not normally have to confront online bullying think about the way in which fat bodies are still judged and dissected online. Comments ranged from calling the women in the image "fat hoes" or "lazy" to health concern trolling and sexually explicit comments. It's possible these same commenters potentially reported the image enough times to alert Instagram. As a fellow visibly fat woman online, I have received the exact same series of comments when I have shared my own bikini images. Both Dubey and Manokaran want the people who left these comments to think about the humanity of the people in the image.

"I wish people knew that behind the picture, or the blog post or whatever medium we choose to express ourselves in, there is a person with real emotions, who has gone through or is going through life," says Manokaran. "And if you cannot give out positive comments and uplifting messages, why try to put someone down just because they don’t fit into your ideals about life and society? You are bullying the person behind that image, twisting your words to make them feel guilt, shame, disgust for existing and that is not right."

Dubey says the entire experience has both reminded her that there is more work to do as an activist and also shown her the power of solidarity. Even with its pervasiveness in the daily lives of millions, social media still has room to grow in protecting its users. And whether or not Instagram removed this post by accident or someone mistakenly believed it to be a violation of guidelines, it still says something that an image of three bikini-clad plus size women is still that alarming to anyone enough to be reported multiple times. The stigma against fat bodies is still very much alive. Luckily, women like Dubey, Manokaran and Dhaschainey are using their own visibility and platforms to challenge that.

More like this
Why TikTok's 15-Minute Cleansing Challenge Isn't All It's Cracked Up To Be
By Rebecca Fearn
Here Are All 703 Outfits Rachel Wore On Friends
By Kat George
The Best Heels For Bunions, According To A Podiatrist
By Margeaux Baulch Klein and Maria Cassano
How To Deal With A Partner Who Body Shames You
By Lexi Inks
Get Even More From Bustle — Sign Up For The Newsletter