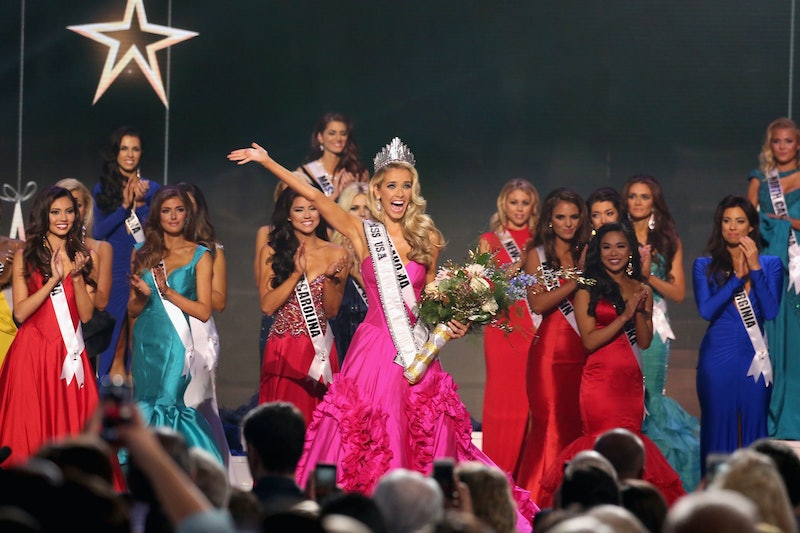 As we're all gearing up for Sunday night's 2016 Miss USA pageant to hit the airwaves, I've been hearing a lot of people ask what the difference between Miss USA and Miss America pageant is. To make a little things clearer, I thought I'd break it down for you.

First of all, if you do get them confused, it's easy to understand why — since both are filled with hairspray galore, gorgeous ball gowns, and beautiful contestants. Additionally, both pageants provide opportunities to earn scholarships and break into careers like acting and modeling. But, there are a few fundamental differences between the two, including the owners of each pageant, the competition itself, and the next steps for the winners of each competition.

With the 2016 elections now in full throttle, you're probably well aware that presidential candidate Donald Trump used to own the Miss USA pageant along with NBCUniversal. However, NBC dropped the pageant earlier this year, and the show will now be aired on FOX. Miss America, on the other hand, is owned an operated by a non-profit that is based out of New Jersey.

While both pageants require personality interviews, a swimsuit contest, and evening gown presentations on stage, as you may have learned while watching Miss Congeniality, Miss America requires all of its candidates to compete in a talent contest, whereas Miss USA does not.

Finally, Miss America's pageant is not followed by further competition, as that is considered the highest level of its pageant track. Miss USA, on the other hand, is followed by the Miss Universe competition, in which women from all different countries compete for the final crown.

While they are quite different, they both celebrate and support the beauty, intelligence, and talent of a diverse group of women.

What's not to love about that?