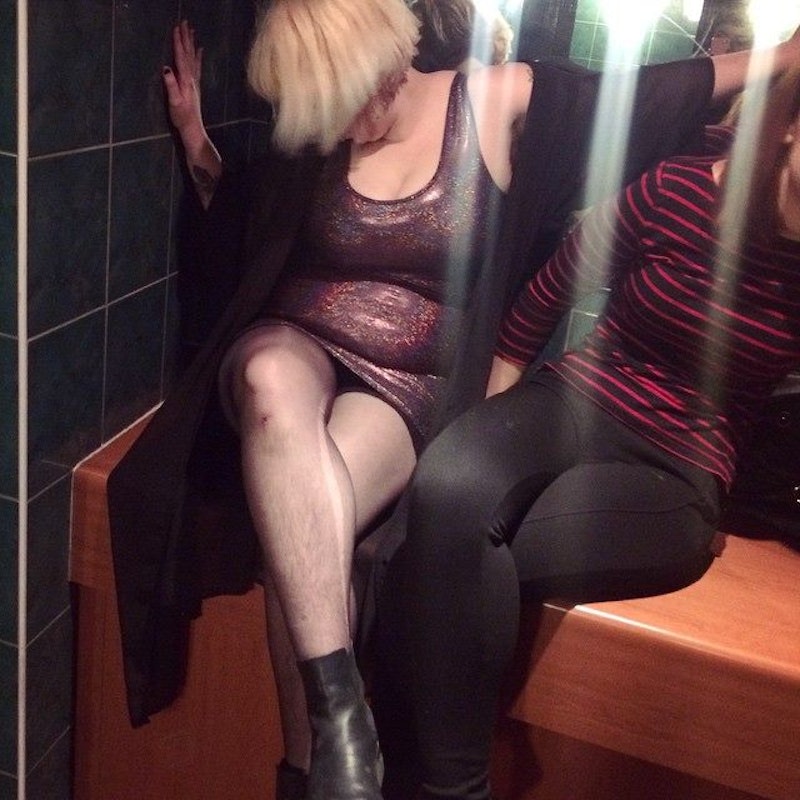 Writing about body image issues and beauty standards on the daily isn't just work for me, but an act of catharsis. Ultimately, tackling traditional beauty standards is something I not only face online, but in my day to day as a fat and hairy woman.

From the ages of 12 to 19, I shaved my whole body — arms, underarms, legs, thighs, belly, toes, and pubes — two to three times a week. While I was dealing with my dark body hair, I developed a disgust with any and all fat on my frame, too. I was always a chubby child, but being a curvy teenager wasn't something I could cope with. I didn't understand why I was cursed to be born into such an ugly body.

While the world has changed a lot since that time, and I've grown both mentally and physically, I still struggle to find representation of women who challenge the norm in more ways that one. Free the nipple imagery is primarily flooded by perky, white breasts. Fuzzy armpits appear on thin bodies in artsy photography exhibits. And fat women are as smooth as dolphins, often dolled up to be as conventionally attractive in every other aspect as possible.

I cannot help but wonder if it's easier, as forward-thinking feminists, to ease an anti-woman society and media landscape into accepting our "flaws" by introducing them on women whose bodies do not house more than one of these perceived faults. For some thin women, it may feel revolutionary to see another thin woman rocking body hair. But that barely scratches the surface of representation for me and many other fat, hairy babes.

Similarly, it makes little difference for most plus size women to see another plus size woman in the media if she looks practically "perfect" in every other way. Such imagery is not challenging beauty standards per se. It's simply opening them up a little.

By re-packaging beauty standards — or rather, pretending we are challenging beauty standards in a bigger way than we are — we inadvertently cause more harm to the communities marginalized most; amongst them, fat and hairy women or femmes. We perpetuate an "if" in the air that remains on the edge of everyone's tongues, but is never actually spoken out loud. Yes, you can have body hair... if you're thin. If it's minimal enough to only be noticed on your privates and pits. If we frame it in a way that panders to the male gaze, albeit an artsier male gaze.

So women like me (and many rad women unlike me) who break boundaries and challenge norms in totally different ways are left out of the conversation entirely. Not explicitly, of course, but with implication upon implication: By not being represented, by not being included, and by not being discussed.

I cannot stress the importance of representation enough. "If she can't see it, she can't be it," wrote Rebecca Brand for The Guardian, summing up my feelings on the subject quite succinctly. Although Brand's piece is regarding female representation in the media in general, I find the sentiment to ring true when it comes to marginalized female presentations especially.

Representation is getting marginally better, in some ways at least, as is more diverse imagery. That said, we may be seeing more plus size women and fat politics in our online news feeds and social media timelines, but the reality is that these notions haven't spread into the mainstream in a truly tangible way. The truth is, I want to celebrate small victories, but I'm feeling the defeatism harder than ever. Imagery of plus size women with body hair, queer plus size women, plus size women of color, and butch plus size women still feels rare at best.

More and more, I find myself placing my gaze on the people who catch sight of me, challenging them to say something about my weight, my clothes, my body hair, or all three at once. I know they never will. Their judgment lingers in the air, a passing moment between strangers with me cognizant of the simple and obvious fact that they disapprove of my lifestyle and I disapprove of their politics. The internet may be celebrating diversity in lists and hashtags, but reality still feels no more changed than before. Particularly if you embody two or more aesthetic traits that are the antithesis of conventional beauty standards.

I don't want to dismiss the solace and solidarity to be found in cyberspace, but I don't want these things to blind us to the actual actions that still remain undone. I am celebrated on the WWW for being myself, and for breaking boundaries in more ways than one. But I am Snapchatted by strangers in the IRL world who take up qualms with how I look. I know some may feel represented by the small changes we're seeing, but we can't stop fighting until those changes are felt by everyone.