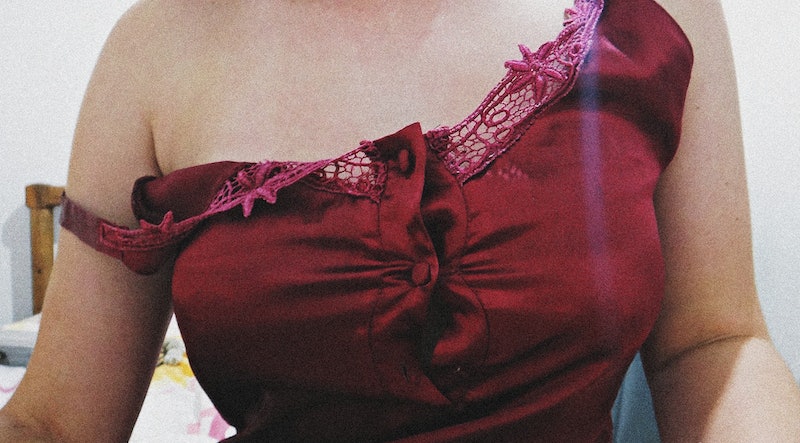 The Free the Nipple movement took up most of my shared Guardian articles in 2014, and several Bustle contributors wrote on it extensively as well. Yet something about the movement has always rubbed me up the wrong way. For me, Free the Nipple was to feminism what the argument about shaving legs was to Tumblr feminism in 2011: An ego boost for those comfortable enough to participate. Essentially, it was a new beauty standard for women to be judged on in the Who’s-the-Best-Feminist Olympics.

The website for Free the Nipple argues a mission to stop the sexualization of a body part that isn’t inherently sexual, and to empower women across the world. To get to this, you must first scroll past an advertisement for their T-shirt, which depicts a censored pair of breasts which we've repeatedly seen before: The perfect perky porn tits. It immediately reminds me of something you’d see on a Hollister twat who’s had sex twice, loves Family Guy, and thinks he's got swag because there's a naked woman covered in rose petals on his shirt. Although I agree with the original message of Free the Nipple — the unfairness that “you can sell breasts, but you cannot wear breasts, in America” (Violet Rose) — the movement has begun to seem like a means to allow women with [only] sellable breasts to wear them in America.

Film clips shown on the website present us with primarily white women, all of whom are thin, cis, and able-bodied. The scenes of police brutality contrast with these women's vibrant protests, and I know that their lack of representation wasn’t a conscious choice. I’m sure that these women would have welcomed anyone with breasts in any shape to join them. But the unconscious ignorance of diversity is one that we cannot allow within any feminist movement in 2015. Feminism without intersectionality is pointless; freeing nipples and only representing nipples that adhere to patriarchal standards of beauty is pointless.

So many superiority complexes are formed by the beauty industry, and in beauty-related movements. It's not unlike 2012, during which I wanted to scream: "Who gives a shit?" You shave? Well done, I wish I could be bothered. You don’t? That’s cool, I’m a fluffy babe too. You’re comfortable enough to not wear a bra? Fabulous! As a good friend once told me, nipples are the perfect accessory. You’re super excited about your new push-up pastel pink bra? Me too, your cleavage looks fabulous! Yet the majority of women tweeting about the freedom of their nipples are simultaneously imposing their own beauty standards on their supposed "sisters."

However, confidence is not the only factor in why a woman would refrain from freeing her nipple. I hesitate to say it, for fear of the wrath of Wikihow doctors, but medical reasons are also of concern. From my own braless escapades, extended periods of time without the support of a good bra is not liberating, but limiting. Even an ill-fitting bra can cause effects like an excruciatingly painful bad back and an almost-permanent hunch to adjust to the weight of my tits. I have no issue with letting my noncommercial boobs roam free, but the hassle is not worth the hashtag-worthy level up in my feminism.

Through these trivializations, we miss the genuine message of Free the Nipple (the one the woman above is actually trying to convey). I believe the movement has been appropriated to create a new impossible beauty standard for women (because all beauty standards are impossible, as it’s impossible for all women to fit into one standard). The point remains that breasts aren’t necessarily sexual, and we’re living in a world in which a woman can be shamed for breastfeeding — shamed for using a breast for what a breast is actually for — and in the same breath, shamed for sharing a sensual topless picture and sexualizing her own body.

This epitomizes the issues with breasts that women (and all people with breasts) are forced to deal with simply for having them. A breast cannot be seen as nonsexual in today’s society, due to patriarchal standards created by men with underlying mommy issues. But if a woman sexualizes her own breasts, then she is demonized — and this has reinforced to us that the people who have breasts are not the ones who own them, and that it's instead society who decides the when, what, why, and where of boob acceptability. The standards and exclusivity formed within Free the Nipple are reminiscent of these power plays. Those comfortable with reclaiming the breast for women are only reclaiming it for themselves under the guise of feminism and freedom.

More like this
Here Are All 703 Outfits Rachel Wore On Friends
By Kat George
Amanda Gorman Shared A Powerful Message On Meghan Markle’s Penultimate Podcast
By Darshita Goyal
Claire Foy & Rooney Mara Revisit A Devastating Tale In 'Women Talking'
By Bustle UK
The Best Heels For Bunions, According To A Podiatrist
By Margeaux Baulch Klein and Maria Cassano
Get Even More From Bustle — Sign Up For The Newsletter