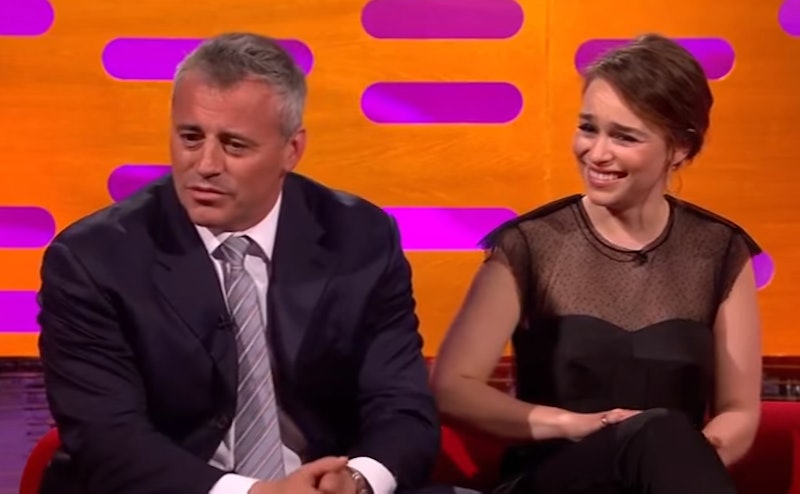 As one of TV's biggest stars right now thanks to her her role as Daenerys Targaryen in the HBO series Game of Thrones , surely Emilia Clarke is getting used to life as not only a successful actor but also a pretty major celebrity... right? Especially as she's promoting her new film, Me Before You, and doing all the press for a major movie entails — TV interviews, red carpet appearances, and press conferences — it must be pretty much old hat to her by now. The 29-year-old seems to be taking it all in stride... except for a recent appearance on The Graham Norton Show when Clarke completely lost it during her joint interview with her favorite '90s crush.

Appearing alongside actors Kate Beckinsale, Dominic Cooper, and Matt LeBlanc, Norton started the interview by asking Clarke if she got a chance to chat with everyone backstage prior to their interview. Clarke immediately burst into a huge grin and laughed, "yeah, kind of." Her massive crush on LeBlanc was revealed, whether she liked it or not, and she pretty much fangirled out over the Friends star and '90s heartthrob. She started blushing and said, "yeah, I just think you're wicked" as he leaned in for an adorable side hug.

Beckinsale said her teenage daughter is a Friends obsessive, and Cooper even said, "I think my mum would pass out if she knew I was sitting here with you." The group had plenty of fun gushing over LeBlanc, and can you blame them? I don't think my Joey Tribbiani crush will ever go away, and by the looks of it, neither will Clarke's.

Norton asked LeBlanc if he was a Game of Thrones fan, and he admitted he did watch the first season but "fell out of it" and is now behind because "there's so much going on." Clarke easily forgave LeBlanc, saying "It's OK! It's all right! You've seen the good bits!" But she had one small, yet necessary request for LeBlanc.

Clarke sweetly asked, "Would you be able to ask me how I'm doin'?" and of course, LeBlanc happily obliged, melting '90s hearts around the globe with three little words.

I mean, let's be real... who among us wouldn't start blushing and giggling being seated on a couch next to LeBlanc. Now if only there was a way to have some sort of Friends-Game of Thrones mashup happen... I think TVs around the world might explode.