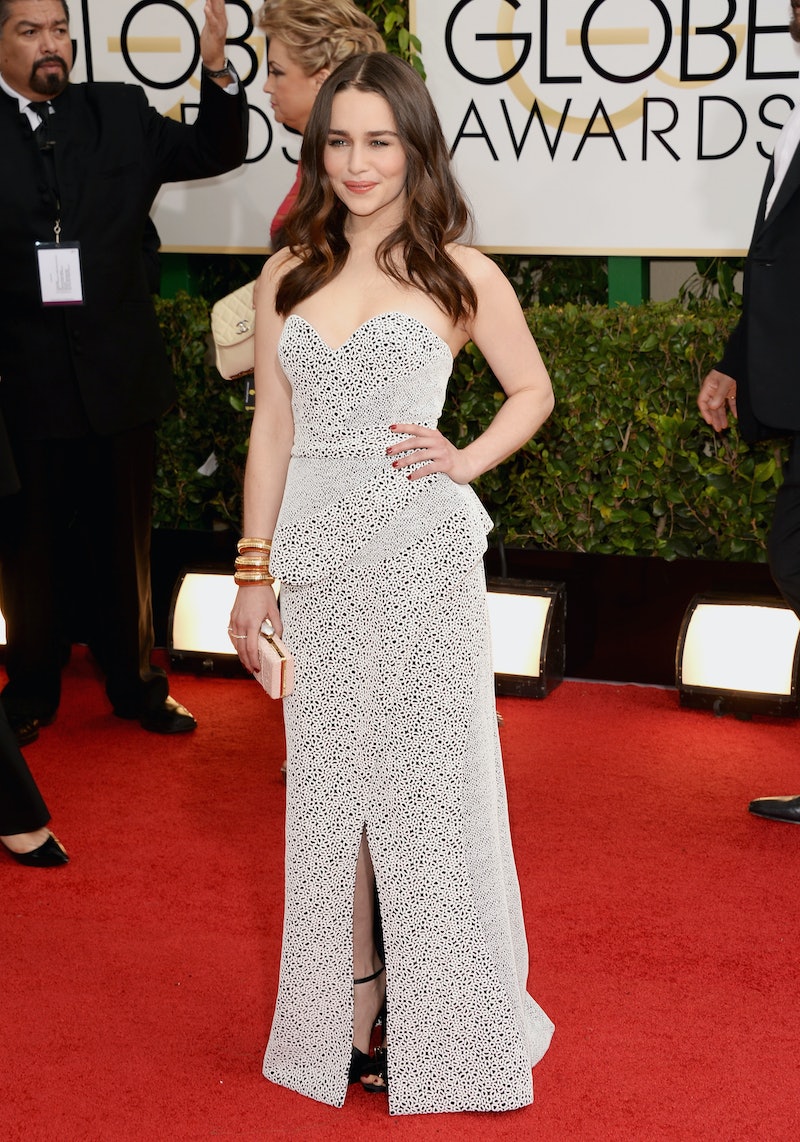 You definitely already love Game of Thrones ' Emilia Clarke and if not, you at least have some serious eyebrow envy. But did you know that she once sang "Happy Birthday" to a drunk guy because he asked her to or that she won over the HBO casting directors by doing the robot and the funky chicken? The breakthrough star of the HBO series based on George R.R. Martin's books opened up to The Wall Street Journal about the challenges in bringing to life Daenerys Targaryen, her humble beginnings, and looking "out of place" during her first trip to LA. And now we're convinced that she might actually have some Targaryen blood running through her veins.

According to the actress, she sees more and more of the character in herself and vice versa every day. She says of Dany:

It's the growth of a girl into a woman. She's being thrown into the deep end, to see if she can sink or swim, and she decides to do it her way. It was wonderful to see a character with such humble beginnings, and such low self-esteem, beginning to trust herself. So my feelings within filming it were echoed—in a much more dramatic way, obviously.

She admitted to WSJ that she spent the entire first season worrying about whether or not she was doing it right. But when Clarke realized that, like the Mother of Dragons, she was breaking into a vicious world full of doubters (I mean, that's what super-fans of novels are when it comes to film and TV adaptations of their favorites) she pushed through it. Now she's been nominated for an Emmy and is a fan-favorite of the HBO series — I guess she channeled that worry to the right place.

On doing whatever it takes to get to the top:

I did the robot, followed by the funky chicken. I think it sealed the deal.

According to Clarke, during her audition for the role, GoT show runner David Benioff dared the actress as a joke to show of her dancing skills. She obliged and got the part, even though Benioff insists that she had the role way before that. You gotta do what you gotta do.

She was born to be an actress:

One of my best friends has come out with me for this trip, and she reminded me of something rather embarrassing. I've known her for almost two decades, and she said, "When I first met you, you said, 'Hi, my name's Millie, and I want to be an actress.'" I was like, "God, that's cringe-worthy." But I was always determined.

Clarke says she first told her parents that she was going to be an actress when she was a toddler and they took her to see a stage production of Showboat. Daenerys might not have always wanted to be queen, but she was born to be one and she's determined to get there.

On taking on a daunting role:

Clarke was obsessed with Audrey Hepburn's My Fair Lady as a child, so she jumped at the opportunity to take on another famous Hepburn role, Holly Golightly, in the stage version of Truman Capote's Breakfast at Tiffany's. Daenerys has hit plenty of walls during the journey to her rightful throne and her supporters commend her for her bravery constantly — being the rightful heir to the throne doesn't mean it comes easy.

She's equally as isolated during filming:

We're [often] in totally different locations. You're at an awards show, saying 'Lovely to meet you. We're in a show together, apparently. You're really good!'

Clarke has yet to share a scene with many of GoT's other biggest stars. The actress spent most of her time filming in Ireland and Croatia while the rest of the cast filmed elsewhere, meeting up only for trade shows and during awards season. Daenerys still doesn't know who and what she's up against when she reaches Kings Landing — that makes two of them.

I tried a robin heart once. It wasn't very good.

In response to WSJ asking whether or not her kinship to Daenerys included the consumption of a horse's heart in real life, the actress laughed and said no. But she has eaten a heart before — just one that's a lot smaller. Clarke didn't say why she'd tried robin heart — perhaps for character research?