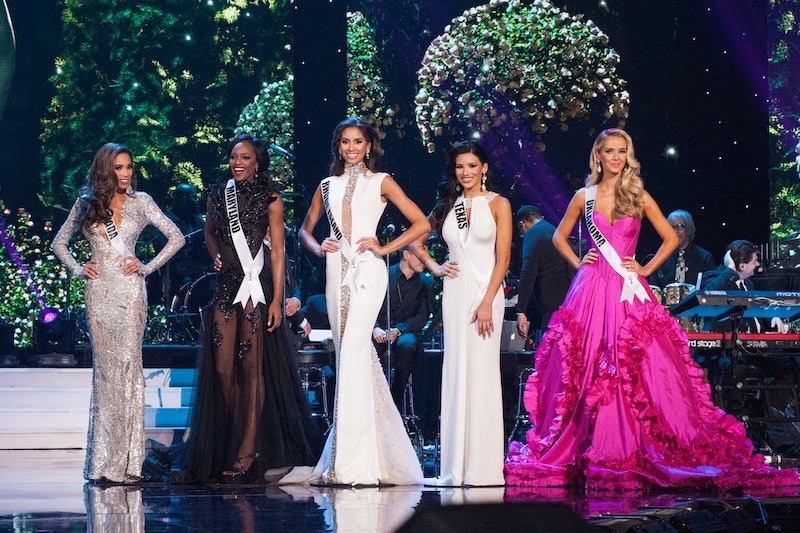 The 2016 Miss USA pageant is coming to television almost a year after NBC decided to cut their ties with the franchise over Donald Trump's offensive comments about Mexican immigrants. Trump has since sold the Miss Universe organization to WME/IMG, but it still won't air on NBC. So if you want to watch the competition this Sunday, what channel will Miss USA be on? It shouldn't be a significant change — Miss USA has only moved to FOX, another major network, after the company acquired Miss USA along with Miss Universe and Miss Teen USA in 2015. You can watch the competition on June 5 from 7 to 10 p.m. ET (and it will be time delayed for other time zones, so don't spoil yourself, West Coast viewers) on FOX.

And while the very concept of something that's often referred to as a "beauty contest" and still has all of the contestants walk onstage in bikinis might be, understandably, off-putting to some, there are actually plenty of reasons to watch Miss USA this year. Nothing compares to the shared experience of watching something live, even if it's an event as frequently unappreciated as Miss USA. But if you're feeling guilty about looking forward to the show, you don't have to be and here's why.

The Possibility Of Another Steve Harvey Moment

After Steve Harvey accidentally crowned the wrong Miss Universe in late 2015, the possibility of live flubs has never seemed so exciting. He may not be hosting the Miss USA pageant, but that doesn't mean there won't be a similar shocking moment.

These Women Deserve Some Attention

The best part of these competitions is hearing about things that the competitors have used beauty pageants to overcome. Whether it's growing up with some kind of disability, a lack of means, or bullying, it's a chance to learn about what these women have gone through and be inspired.

The Competition Isn't All Swimsuits

While criticisms of the pageant's focus on appearance and very narrow standards of beauty are certainly valid and we should continue to challenge that aspect of it, there is more to the competition than swimsuits. The contestants also support charities, think about current events, and champion real causes.

The RHOA star is a former Miss USA winner, and, at least in my book, one of the most skillful reality stars of all time... so you could be seeing an early glimpse at a future TV genius.

The Tagline Is About Something Important

The tagline for Miss USA is "Confidently Beautiful." And while that might be a surface reference to the competition's focus on looks, it also speaks to the importance of confidence, and I hope that's the real theme of this year's Miss USA pageant when it airs on FOX Sunday night.