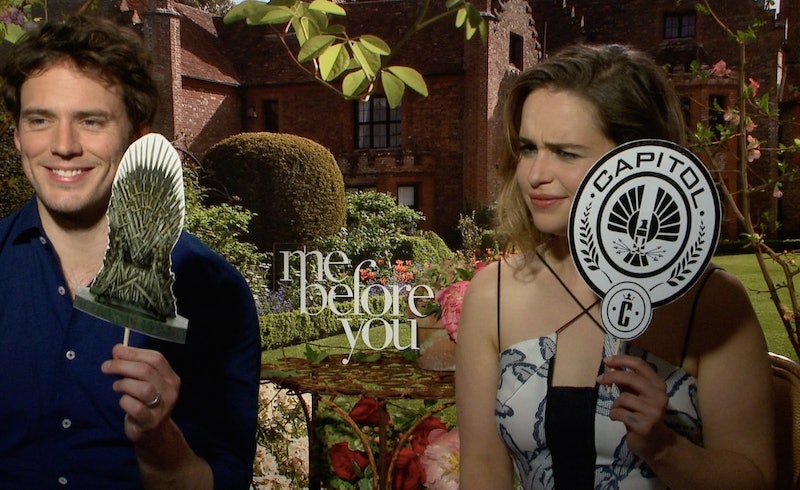 Despite taking place in entirely different time periods/universes, Game of Thrones and The Hunger Games have more in common than you'd expect. Poor leadership? Check! Badass women? Check! And, the latest way the two are joined? Two of their stars appear together in Me Before You . Sam Claflin (Finnick in The Hunger Games series) and Emilia Clark (Daenerys in Game of Thrones) play Will and Lou in the tear-jerker of a romantic movie, which is based on JoJo Moyes' novel of the same name.

But, before they played 2016's sweetest ill-fated couple, they were best known for their respective hit series. So, at a junket for the film in New York City, I took a minute to play a game with Sam Claflin and Emilia Clarke: "Capitol or Westeros," where I gave them topical situations and they had to decide if the event would occur in The Hunger Games' Capitol or in Game of Thrones' land of Westeros.

And, as Clarke and Claflin soon found out, it was harder than it seemed. Everything from #FeelingTheBern to Donald Trump running for president could really happen in either series, which just reinforces that I never want to visit Westeros or the Capitol IRL. (Is Donald Trump President Snow? Is he Joffrey? Who's to say?) You can watch their picks in the video below.

Is anyone else now seriously hoping to see Clafin appear in GoT? While we wait for that dream to come true, you can cry over Clafin and Clarke in Me Before You when it hits theaters on June 3.