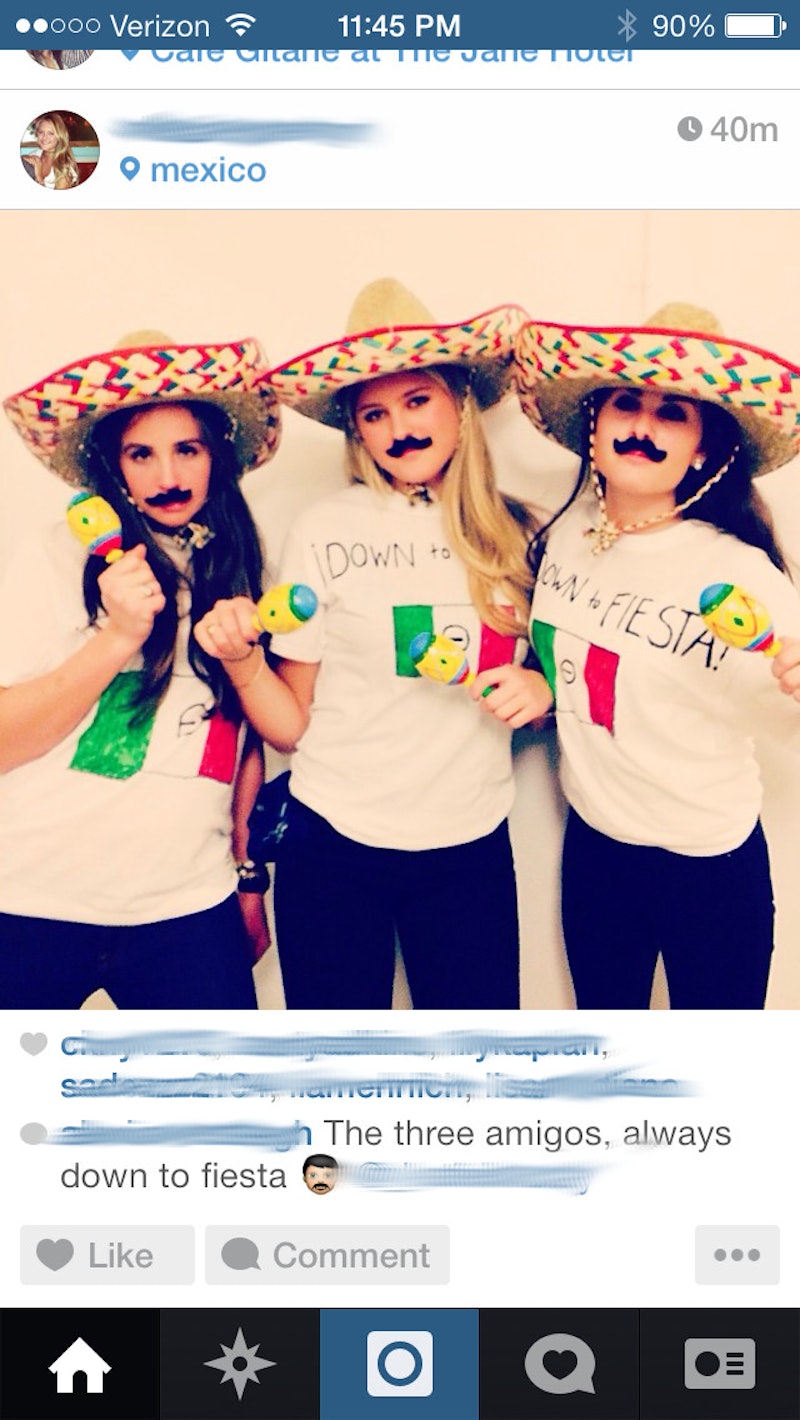 Another weekend, yet another offensive party thrown by a college Greek chapter. This time, it's the Kappa Alpha Theta sorority of New York City's Columbia University, which manage to offend a whole host of racial groups with their Olympics-themed party Saturday. Members of Kappa Alpha Theta dressed up as residents of Mexico, Japan, the Netherlands, Ireland, and Jamaica, to name a few, and photos of their costumes promptly hit Facebook and Instagram. On Monday, Columbia's student newspaper, the Columbia Spectator, broke the news of Saturday's ill-advised party.

According to photos later posted on BWOG, the women "representing" Mexico at the faux-Olympics wore T-shirts with an altered Mexican flag and fake mustaches, and carried tequila, maracas, and sombreros. Those photographs were then posted to Columbia's Chicano Caucus' public Facebook page.

A person standing in for Ireland in the Beer Olympics carried a sign that read "Kiss Me, I'm A Famined Potato," and the students on the Japan team wore schoolgirl outfits and pigtails. The "Netherlands" women wore Heineken T-shirts, and "France" wore berets, stripy tops, and clingy attire.

These days, Columbia is a ethnically diverse college, with just over half its students identifying as people of color. Several of the university's organizations, including the Department of Latin American and Iberian Cultures and the Chicano Caucus, have already expressed outrage over the leaked photographs from the party.

The incident is the latest in a series of racially offensive parties thrown by Greek organizations which have sparked outrage, and even led to the exclusion of some chapters. Last week, an University of Pennsylvania sorority chapter threw a "gansta party" that featured guests wearing backward caps, baggy trousers, and fake tattoos; and in January, an Arizona State University fraternity hosted a "Martin Luther King" event on MLK Day that parodied black culture.

And before that, there was the "Chola" party at California State University-San Marcos, and a "Blood & Crips" party at Dartmouth College.

In a statement reported in the Daily Spectator, Columbia's Panhellic Association apologized on behalf of the sorority.

The Columbia University Panhellenic Association fully recognizes the seriousness of the issue at hand and sincerely apologizes for any harm that these pictures may have caused. We are taking this matter very seriously and are working directly with members of the organization involved to address the situation thoroughly. We would like to stress that the concerns brought to light by this incident do not at all reflect the shared values of the Panhellenic community, or of Columbia’s greater Greek community, but rather the unfortunate and unintentional misjudgment of a few individuals.

While we understand that the actions taken by these members may not have intended to be harmful, they were in fact offensive. Stereotypes are used to oppress marginalized communities. These pictures caricaturize Mexican culture and should not be overlooked. The attire trivializes an entire nation’s history, its peoples, and its cultures, reducing them to a mere mustache and sombrero. Though the attire was meant to represent Mexico in a game of Beer Olympics, in actuality it perpetuates the American stereotype of the sombrero-wearing Mexican-American migrant worker, distorting the culture into a form of entertainment.