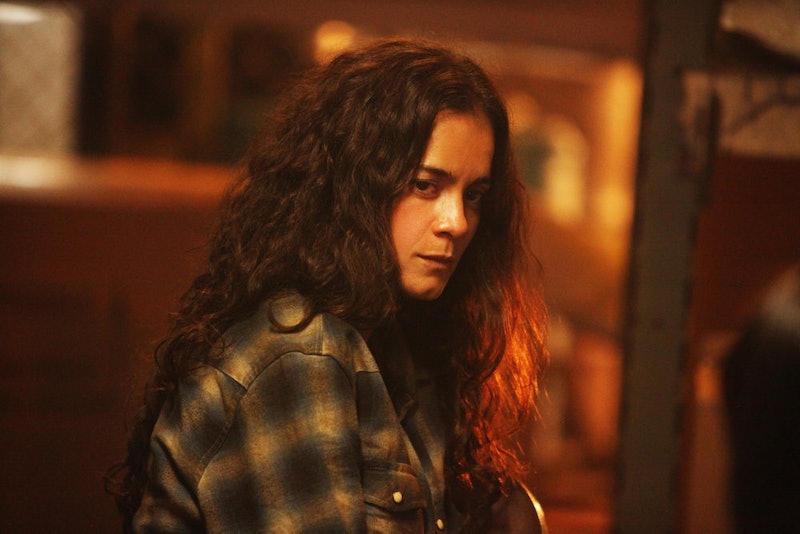 On Thursday, USA's newest series Queen of the South premiered, and if you're in the mood for an action-packed series revolving around a female lead, then you may just want to tune in. The drama follows Teresa Mendoza (played by Alice Braga) who becomes the leader of the biggest drug empire in the western hemisphere, after her boyfriend is murdered in Mexico forcing her to go on the run. It's a role Alice Braga tells Bustle she is proud to play, especially because Teresa is a strong, complex woman who chooses to never be a victim. "What I love about it is it's a female lead character," Braga says. "It's a strong woman that goes through a lot in her life and shows a pragmatic, young girl that just fights to survive in every single way."

What makes Teresa even stronger is that she doesn’t let her gender stop her from going after what she wants, even though what she wants is more power in a dark and extremely male-dominated world. As Braga details about Teresa, "She is someone that was born and raised in very poor circumstances, then life throws her into this cartel world with her boyfriend. Then, when he gets killed she starts being pursued by the cartel. It's a very interesting journey. ... I think it's a really beautiful journey of this woman who's becoming this queen, powerful woman for the cartel world, which is a very male-driven world. So it's nice to have this female power."

Speaking of female power, throughout the pilot viewers probably realized quickly that the series is about women taking back the power and women who are becoming prominent lead figures in the cartel world. It's something that attracted Braga to the character, especially since she's a fan of the book of the same name (La Reina Del Sur) written by Arturo Pérez-Reverte. "When I read the book seven years ago, I totally fell in love with the character and that was something that drove me to love the book and to connect with it," the 33-year-old actor says. She also admires Teresa's strength and power, which is something that she looked forward to challenging herself with as an actor.

Unlike many characters written for women, Teresa is multidimensional. It's refreshing to see on TV and something that I myself as a woman appreciated. From the get-go, Teresa's layers are evident, and there is one particular scene that speaks volumes to who she is and adds to her overall character: the scene in which she is raped. There's no doubt that Teresa is a survivor and has also seen herself as one. In the middle of the sexual assault, Teresa sees a vision of herself as a powerful woman and what she could become. Her character even says, "Moments like this define your future." It's clear that Teresa is not a victim and is someone who is going take back the power, all while making things happen for herself.

Braga offers insight into what was going through her character's mind and what that glimmer of herself meant:

"I think definitely the apparition is because of that and because she was raped many times when she was younger, so that rape, that's why it's not a massive fight. In the book, there's this beautiful line, this beautiful thing [Pérez-Reverte] said she was being raped and she didn't do much because she just wanted to get over with that soon. Someone that was raped since she was 15 and all that, it changes a lot, you know, who you are and how you face life. One of the things I love about this character a lot is that she's not a victim. I love that heroes are not victims. She's a hero for her life, so that's something that I've always admired about her that she never victimized herself. She's very pragmatic and just wants to survive."

In addition to her empowering character, another element Braga loves about the series it that it has a predominantly Latino cast. "It's wonderful," she says. "We have such a massive community nowadays in the U.S. that it's wonderful to be part of a project that's honoring that in a way, even though it's about cocaine and all that, there's a lot of action and entertainment. It's not a world that is like how mainly Latins are, because we're not only that, but it's great to give the chance for a Latin actress to be the lead on a show."

Queen of the South is obviously dealing with a grim situation, but there is one thing Braga hopes the drama showcases when it comes to Teresa. "What I love about the book — and I hope they honor this in the series — is that she is not an evil character and she never was driven by desire to be rich, but always desired to survive and to be safe. That's something that I admire a lot about this woman."

I have a feeling viewers are going to feel the same way.

More like this
Lydia Leonard Is Setting The Record Straight
By Olivia-Anne Cleary
Sandra Bullock, Girlboss Extraordinaire
By Matt Harkins & Viviana Olen
Spice Girls’ Net Worth: The Richest Member Is Wealthier Than The Rest Combined
By Hugh McIntyre
The Good Doctor Already Added 2 New Cast Members For Season 6
By Brad Witter
Get Even More From Bustle — Sign Up For The Newsletter