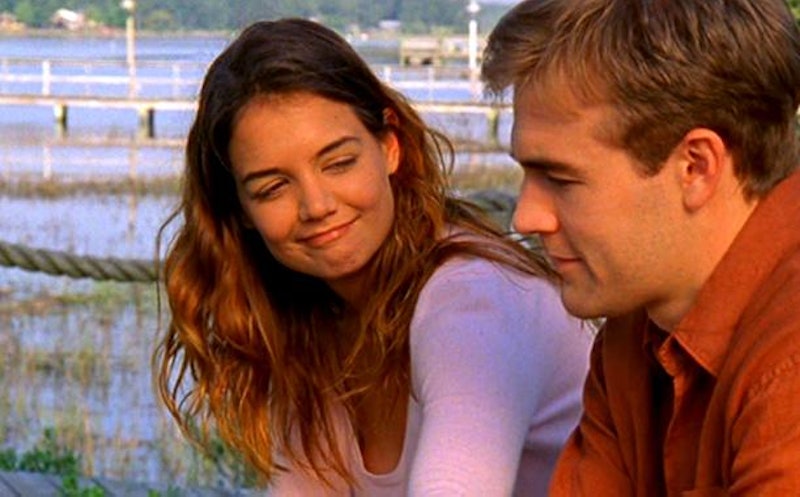 I went through puberty in the '90s. Somehow I see it as something much more terrible and awkward than puberty now. It's probably because the '90s were terribly uncool most of the time, so culture and trends just added insult to injury in the most traumatic time of our lives. Of course, going through puberty at any time is an awful, confusing experience, but the '90s gave us their own unique set of challenges. Going through puberty in the '90s meant a lot of making out with posters of Devon Sawa, and trying to navigate all those "feelings" without the internet to help us.

The '90s influenced the way you thought about sex for sure, especially when it came to the impressions you got from film and television. For instance, if a boy fingered you on a rollercoaster, he was most certainly a psycho killer and you were in big trouble. It was also a time when your personality had to fit into one distinct stereotype. You were a Charlotte or a Samantha. A Monica or a Rachel. A Ginger or a Scary. That kind of limited dimensionality was especially confusing during puberty. Discovering sex in the '90s and going through puberty in the '90s came with a set of circumstances only '90s kids will really understand. Here are 12 of them.

For whatever reason, in the '90s, an orgasm was described as a sneeze feeling. I'm not sure if kids still tell each other this now, but when I was growing up seven sneezes equalled one orgasm.

2. Thinking You Should Definitely Have A Girl-On-Girl Kiss Because Cruel Intentions

In the '90s girl-on-girl was "chic". We weren't quite woke enough to know that same-sex sex wasn't just a "trendy" thing that hot girls in movies did. So we kind of thought of it as a rite of passage. Teens now seem much more in touch with sexuality in a way that's both inclusive and natural, and not forced on them by pop culture — hopefully this is the trend that prevails!

3. Trying To Live Your Life Through Dawson's Creek Quotes

Or Before Sunrise quotes. Or Reality Bites. Or any kind of other very introspective sort of movie or show that you could memorize quotes from as a sign of both melancholy and intelligence.

4. Wanting To Wear A Bindi But Having It Look Like Part Of Your Acne

This is another thing that we now know to be bed generally. Appropriating culture as a fashion statement is not OK. However, in the '90s, when wearing a bindi was considered "cool", navigating the difference between acne and face decoration was a very odd thing, especially when you were trying to put your bindi among the many pus filled dots on your forehead.

5. Getting Boobs And Having To Give Up Your Favorite Tie Dye Top Because The Circles On It Started Looking Awkward

Tie dye was great and all that, but sometimes unfortunately placed circles over your budding breasts were kind of awkward. You know, drawing attention to the new bits you already felt uncomfortable enough about.

6. The Absolute Embarrassment Of Watching American Pie With Your Parents

The most embarrassed you could possibly be as a person going through puberty in the late '90s was watching American Pie with your parents. There was no greater cringe.

7. Leaving All Your Decisions Up To A Cootie Catcher

Puberty is confusing. It comes with a lot of decisions, and in the '90s, thankfully, you didn't have to make them yourself. You just asked your home made cootie catcher.

8. Making "Just A Girl" By No Doubt Your Anthem For Life

If you were a girl in the '90s going through puberty, Gwen Stefani shouting "I'm just a girl!" was your everything.

9. That Awkward Moment You Thought Taylor Hanson Was A Girl

If you were a straight male, your protracted crush on Taylor Hanson because you thought he was a girl is probably still a source of much embarrassment. Not because there's anything wrong with homosexuality, but because you actually mistook a human male for a female and had feelings that didn't come naturally for you, which was confusing if you were in the middle of puberty in the '90s.

10. Kevin Smith Being Your Sex And Relationships Guru

Just read that sentence. That sentence pretty much sums up how horrendous a '90s puberty was.

11. Writing Absolutely Everything Down

In the '90s, when you were going through puberty, your diary was your best friend. You wrote every feeling and every occurrence down. It makes for great reading when you visit your parents and go through your childhood room now.

Instead of stalking your crush online or actually speaking to them, when you were going through puberty in the '90s and getting "the feelings", you turned to love math. Love math was how you got through all your pubescent crushes and love affairs.