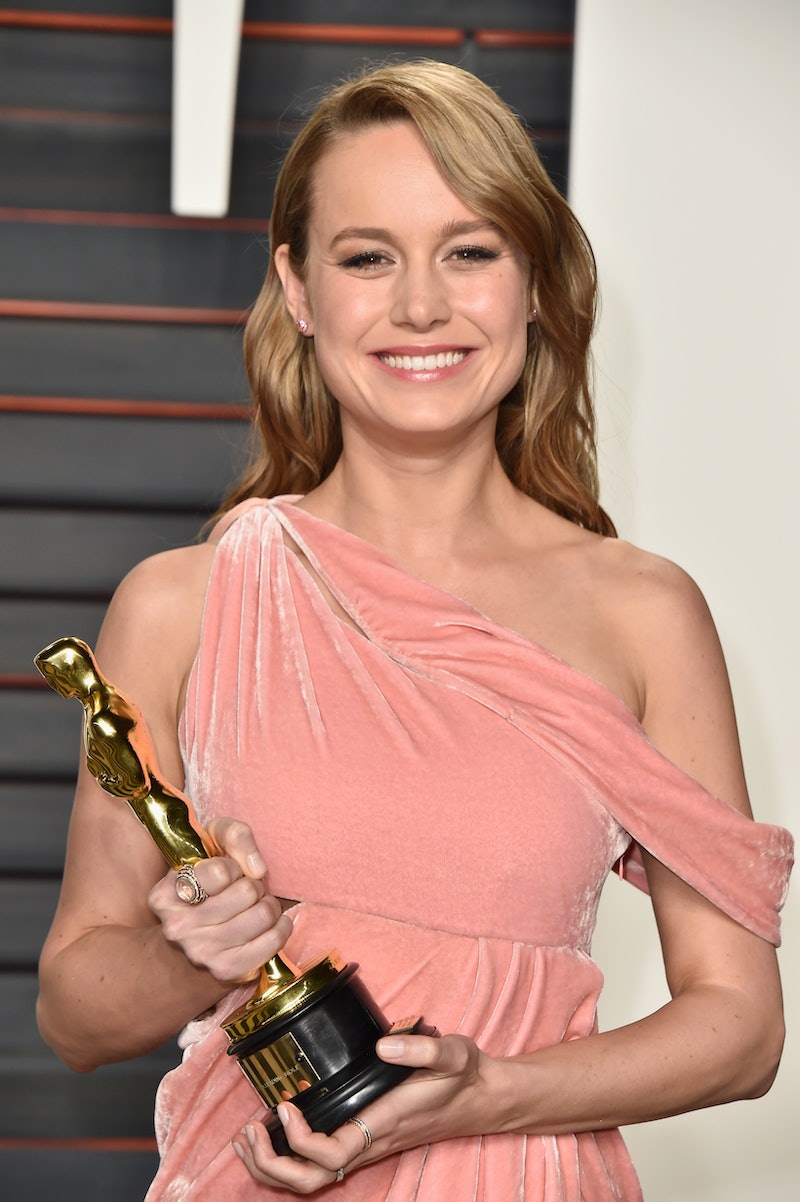 Captain Marvel is getting her own movie, making her the first female superhero in the Marvel Universe to do so. If that's not exciting enough news, Brie Larson will reportedly play Captain Marvel in this standalone film, which will tell the story of how an air force pilot named Carol Danvers became a superhero after an accident mixed her DNA with an alien's. Variety reported that the recent Oscar winner is in "early" talks to do the origin film, written by Inside Out writer Meg LeFauve and Guardians Of The Galaxy scribe Nicole Perlman, and that Larson is Marvel's first choice for the role of one of their most popular female heroes. Earning a leading role in a Marvel movie is certainly a win for any actor, but hiring an Oscar winner for the franchise's first female superhero movie is also a victory for Marvel.

It may seem like a no-brainer for an actor to take a role in a Marvel film, being that they're the best way to earn name recognition and make a little money. Especially in this case, where said actor doesn't have to play someone's girlfriend or sidekick, but gets to be the star of her own Marvel movie. Signing on to a Marvel movie also a real commitment, but if a newly crowned Oscar winner like Larson takes the role of Captain Marvel, it's an automatic co-sign for the film. It's a way to say this movie is going to be more than just another superhero one, it's something to take seriously. Starting with the fact that this movie would be introduced as "Oscar winner Brie Larson starring as Captain Marvel," making it the first Marvel movie to earn that honor.

Sure, Marvel has cast Oscar winners before, but in smaller roles like Anthony Hopkins playing Thor's dad. Female Oscar winners have played the girlfriends: Gwyneth Paltrow as Pepper Pots in Iron Man and Natalie Portman as Jane Foster in Thor. Jennifer Lawrence got to be Mystique, but she was part of an ensemble, never earning her own movie. Not to mention the fact that Lawrence appeared in 2011's X-Men: First Class two years before winning her Oscar for Silver Linings Playbook.

Meanwhile, Larson is just coming off a Best Actress win for Room, which means she is in a position to be a bit more choosy about what roles she would like to take next. As of now, it seems Larson is interested in doing a little bit of everything. Her next films include the 2017 big budget King Kong film starring Tom Hiddleston and Samuel L. Jackson, Kong: Skull Island and the indie film based on the memoir of Jeanette Walls, The Glass Castle, which she's currently filming.

Having Larson take on such a meaty, important role shows that Marvel wants you to take their movies seriously. It's something they seem more and more interested in proving based on Captain America: Civil War, which is a love story between two friends who disagree on the idea of how to make the world a better place. Pretty deep for a comic book movie, wouldn't you say?

But pursuing Larson for the role of Captain Marvel also shows Marvel is taking the idea of their first female superhero movie seriously. The script will be written by two female writers, and Marvel is still looking for a director, which will hopefully also be female. Casting Larson is the cherry on top. It feels almost like Marvel's promise that their first female superhero movie is a priority, not a gimmick to sell merchandise, and they are certainly putting in the time and effort to make sure it's handled right.

That has a lot to do with who they cast. Larson isn't known for her star power, but for her acting ability. She's an actor that has proven she's got the chops to turn Marvel's first female superhero movie into something that is more than a special effects summer blockbuster. Larson's caliber as an actor turns this particular movie into a statement of how highbrow comic book movies — specifically, ones starring women — can be.