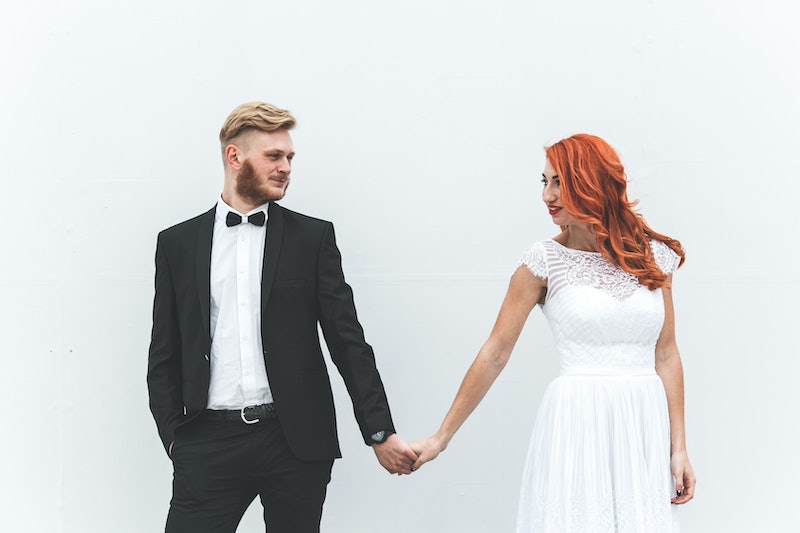 If we're being totally honest, I think weddings are pretty exhausting. Whether you're a casual attendee, in the wedding party, or are the bride herself, it seems like the hype surrounding a wedding is the only thing that keeps your brain functioning as everyone parties well into the night. Naturally, the bride and groom take the hardest beating: they spend hours getting ready, mingling with their guests, and doing any last-minute prep to make sure their day is perfect. So is it really that hard to believe that many newlyweds don't have sex on their wedding night?

According to a new survey of 1,000 heterosexual couples by lingerie brand Bluebella, more than half of just-married couples don't get it on the night of their nuptials. Who can blame them? Weddings take every last ounce of energy out of you, and chances are the newlyweds have had sex before — and have a lifetime ahead of them to do it again. As romantic as weddings are in theory, the reality is that being on your feet from dusk till dawn will totally wipe you out, no matter how sexy you find your new spouse.

Bluebella's chief executive, Emily Bendell, says, "Couples are under so much pressure these days to have a 'perfect day' that it is refreshing that so many are defying expected norms and doing exactly what they want. If that means saving the ‘wedding night’ until they can really enjoy it, then why not?"

Agreed. No matter the reason, it's clear that for many couples, the perfect wedding night doesn't, in fact, include sex. Here are seven other interesting facts about newlyweds that the survey revealed.

1. A Third Of Couples Wait Until The Next Morning

What's better than morning sex? Almost nothing. After getting a much needed good night's sleep, newlyweds are feeling friskier the morning after the wedding and use that opportunity to have their first romp a married couple. Let's hope they also had room service bring up a vat of coffee to keep them going all day.

2. 9 Percent Of People Wait Two Days Before Having Sex

Sometimes, post-wedding mania isn't just one day long. For almost 10 percent of people, they found themselves too busy (or too tired) to make it to the bedroom until about 48 hours after the wedding ceremony.

3. 16 Percent Of People Are Disappointed By Wedding Night Sex

For those who do manage to get it on on their wedding night, it's no surprise that a portion of them are disappointed by how the sex turns out. It's likely that they're either drunk or exhausted, which almost never makes for good sex. On the flip side, this means 84 percent of people are satisfied during wedding night sex, which is super good news. For those who aren't, don't worry — you have years of better sex ahead of you.

The Bluebella survey found that a staggering amount of brides bought sexy bridal lingerie. I can't say I blame them; the idea of gorgeous white, silky lingerie is appealing to me, and I'm nowhere near marriage (or engagement, or having an LTR...).

5. But 37 Percent Of Brides Go To Bed In Different Lingerie

If that lingerie you splurged on happens to be super fancy, chances are you don't want to ruin it with any *ahem* stains on your wedding night. For this reason, 37 percent of brides prefer to switch things up and change into different lingerie before consummating the marriage.

6. 2 Percent Of Marriages Aren't Consummated In The First Week

OK, now we're kind of pushing the limit. Although two percent is a super small number, it's still a little strange that a just-married couple wouldn't find any ~alone time~ in their entire first week of marriage. Maybe they just had a sex marathon leading up to the wedding and need a little breather? Hey, whatever works for you is cool with me.

7. And 1 Percent Aren't Consummated At All

Sadly, not all marriages are built to last. The survey found that one percent of marriages were never consummated, because the newlyweds got into a fight immediately and never reconciled. But if they figured out they're incompatible after only one day of marriage, at least they can just get an annulment rather than a lengthy (and expensive) divorce.