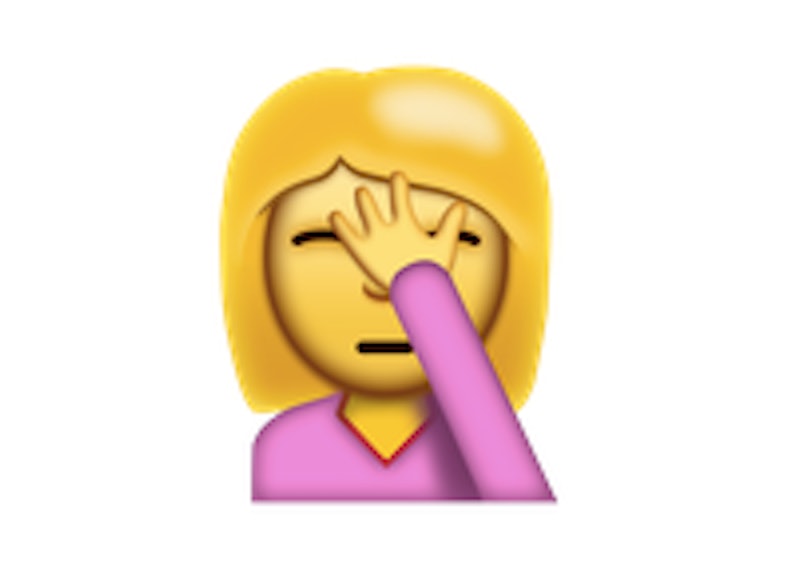 Wish there was a way to convey your frustration or exasperation clearly over text with a single tap of the screen? Meet the face palm emoji on Unicode 9 which is scheduled for release this month! This is major news, people. We need this — nay, deserve this emoji. Honestly, I really have no idea how we collectively went for so long without it. I believe that once this pictorial face palm hits smart phone screens everywhere, it will become one of the most popular emojis to ever grace the hallowed keyboard. Forget about "red dress dancing lady" and "crying while laughing face" — there's a new queen now! (Side note: where is our Beyoncé emoji?)

The face palm emoticon is one of the final 72 new emojis chosen by The Unicode Technical Committee (UTC) to be released as of June 21, 2016. The emoji candidates considered for the update were solely from proposals submitted in 2015 — so we may yet see Google's proposed professional women emojis coming in a subsequent update. However, we shall have to make due for a while, as it will take an entire year for all new proposals to go through the extremely long, complicated and painstaking process of being approved for Unicode 10.0, set for release in June, 2017.

Out of all the new additions, face palm is the most useful and expressive of the candidates. It can be both a verb ("I'm facepalming so hard right now") as well as a noun ("What is that?" "Why, it's a face palm, my good man."). If we want to get really technical, the term is defined by Google as "a gesture in which the palm of one's hand is brought to one's face, as an expression of disbelief, shame, dismay or exasperation." The expression can be used both in a self-deprecating way or towards another person.

According to Know Your Meme, the face palm gained notoriety when a still of Captain Jean-Luc Picard from Star Trek the Next Generation (from the episode Deja Q) was turned into a meme. Picard is super stressed and lifts his hand to his head in exasperation (later in the episode he doubles down, covering his face with both hands — double face palm). It's popularity peaked in early 2012 according to analytics, however the term "facepalm" can be traced all the way back to 2004.

While face palm is my personal fave, be sure to check out the other exciting emojis soon to be available. The food ones are especially impressive (AVOCADO and BACON people!) and I'm sure, given enough time, the internet will figure out some way to turn these 72 new characters into some kind of sexual innuendo.