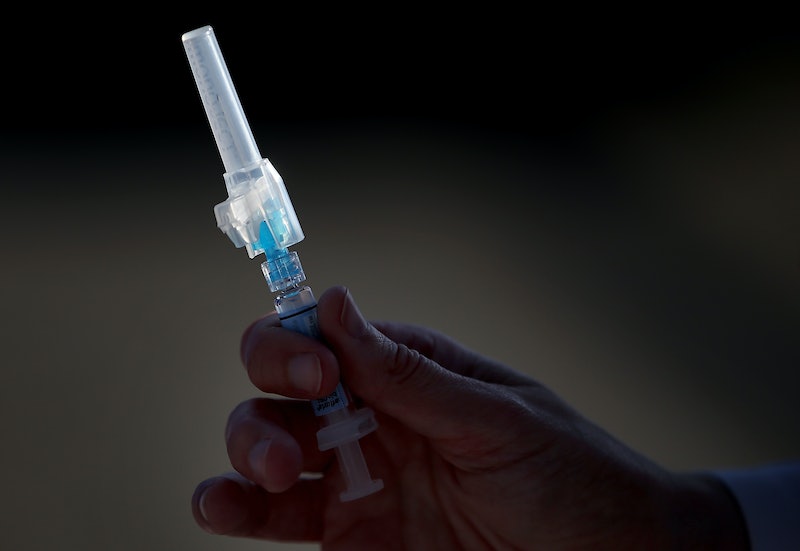 There is no cure for cancer, but sooner than you think, there might be a vaccine. Researchers have made major developments in creating a universal cancer vaccine, and that, obviously, could be huge. Because a vaccine for cancer? Sounds about as amazing as it gets.

Researchers from Johannes Gutenberg University of Mainz in Germany published the results of their trials, which involved both mice and humans, in the journal Nature, and described the results as "very positive." Unlike traditional vaccines, which introduce an inert form of a virus or bacteria in order to allow the immune system to learn how to respond to it, the cancer vaccine the researchers are trying to develop basically introduces RNA from the patient's own cancer cells to the patient's immune system, thereby training the immune system to attack those cells.

It's important to note here that although this the new treatment is a vaccine in terms of how it operates in the body, it isn't the same in terms of the effects we generally expect from vaccines. Because this method requires RNA from an individual's cancer cells, it's not going to prevent you from developing cancer — but if you do get cancer, it could save your life and prevent the cancer from ever coming back. And it's all especially revolutionary since it could theoretically work for any patient and any type of cancer.

"[Such] vaccines are fast and inexpensive to produce, and virtually any tumour antigen can be encoded by RNA," the team writes in their article in Nature. "Thus, the nanoparticulate RNA immunotherapy approach introduced here may be regarded as a universally applicable novel vaccine class for cancer immunotherapy."

Which is all a technical way of saying that we might just be on the verge of developing a major breakthrough in treating cancer.

Of course, as with all things involving research, there's no telling when exactly this treatment might actually be ready for most patients. The human tests in this trial were only to determine whether the vaccine was safe to use on humans, which means researchers want to wait for at least 12 months of follow-ups to ensure no adverse side effects pop up. So this might take a while. But knowing that we're a lot closer than we were a week ago is still definitely worth celebrating.

There are over 1.5 million new cases of cancer diagnosed each year in the United States alone, and over half a million people die in any given year. In 2014, almost 2,000 of those deaths were people under the age of 20. Worldwide, cancer remains one of the leading causes of death, with over 14 million new cases each year, more than half of which prove fatal. And so new treatments are always a good thing.

Immunotherapy — or, trying to utilize the body's own immune system in treating disease — is not a new approach to treating cancer. The human immune system is incredibly powerful, and indeed one of the things that makes cancer so insidious a disease is the fact that it doesn't provoke an immune response, allowing it to grow unchecked. In the past, though, immunotherapy treatments have usually involved trying to engineer cancer-fighting immune cells in a lab, in a process that's both expensive and difficult.

This new technique of using a vaccine to trigger the immune system within the body and allow it to learn to fight cancer cells in the same way it learns to target other diseases is much more effective. And, potentially, a permanent way to make sure a cancer patient stays cancer free.

All in all, it's a pretty big day.