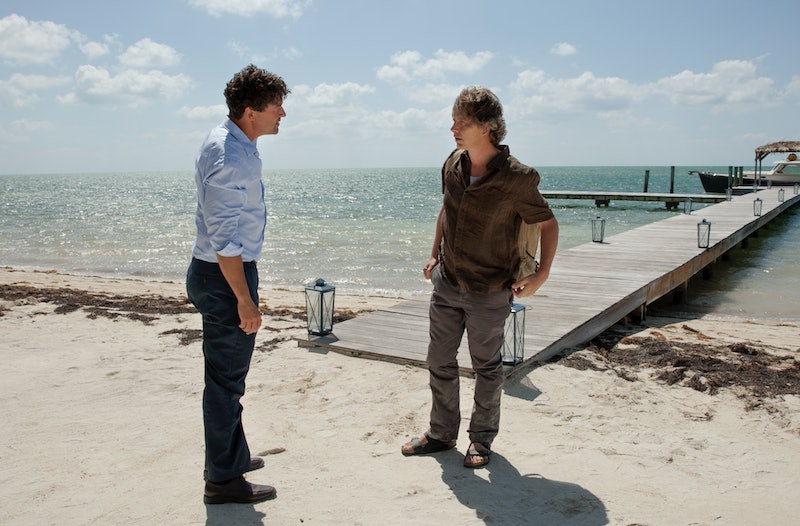 Though it's true that the general premise of Netflix's thriller series Bloodline isn't exactly what you would call "happy" (that is, unless you consider covering up your brother's murder a cheerful topic), the actual setting itself is, quite honestly, pretty amazing. It definitely doesn't seem like the kind of place where murders and a vast array of illegal activity would occur. That's why when it comes to where Bloodline is filmed, it's all about one thing: location, location, location. So while it's true that the Rayburns are dealing with some pretty stressful issues these days, at least it's all taking place in a tropical paradise, right? And if you wanted to explore the set itself, you wouldn't need to look any farther than the Florida Keys.

While it's true that some set locations aren't actually filmed in the areas the characters are supposed to be living in (like how Friends was actually shot at Warner Brothers Studios in Los Angeles rather than New York City), Bloodline is actually filmed almost exclusively on Islamorada, according to the Miami Herald. The name Islamorada translates to "Village of Islands" in English and is located in the Keys, making the Rayburn atmosphere of sandy beaches and calming ocean waves all the more realistic.

The beachfront property that serves as both the backdrop and residence to the Rayburn house and resort is an actual place you can go and stay on vacation, though it goes by its real-life name of the Moorings Village & Spa. You can even rent the Rayburn plantation house itself, which is known as the Blue Charlotte House IRL, for the price of roughly $2,500 a night. Take a cool beverage, sit outside on the porch, and you'll feel like Mama Rayburn in no time.

The Inn isn't the only spot you can visit on the island to get a glimpse of Bloodline 's various filming locales, according to FoxNews.com. Go visit Long Key State Park where John made the dark decision to kill Danny via drowning, or Anne's Beach where Robert did his daily kayaking. And don't forget to grab a drink at Caribbean Club watering hole, where Danny and his pal Eric O'Bannon sought to drink many of their troubles away.

Basically, you can't walk anywhere in the Keys without inadvertently stumbling across a recognizable piece of Bloodline history. In fact, those who live on Islamorada have grown so accustomed to seeing the actors that the residents don't really even think twice about it. "[Kyle] Chandler was shopping with his family and people were just leaving him alone," Islamorada Fire Chief Terry Abel shared with the Miami Herald. "The actors and cast blend in here."

So a beautiful atmosphere and the chance to run into Kyle Chandler? Ummm, why haven't all already moved down there?

More like this
'The Catch' Revisits A Famed Irish Filming Spot From 'The Tudors'
By Darshita Goyal
At 28, Rosie Perez Risked Her Career To Stop Playing Stereotypes
By Gabrielle Bondi
Here’s Everything Coming To & Leaving Netflix In February
By Jake Viswanath
A Guide To All Of Zach Shallcross' 'Bachelor' Filming Locations
By Brad Witter
Get Even More From Bustle — Sign Up For The Newsletter
From hair trends to relationship advice, our daily newsletter has everything you need to sound like a person who’s on TikTok, even if you aren’t.