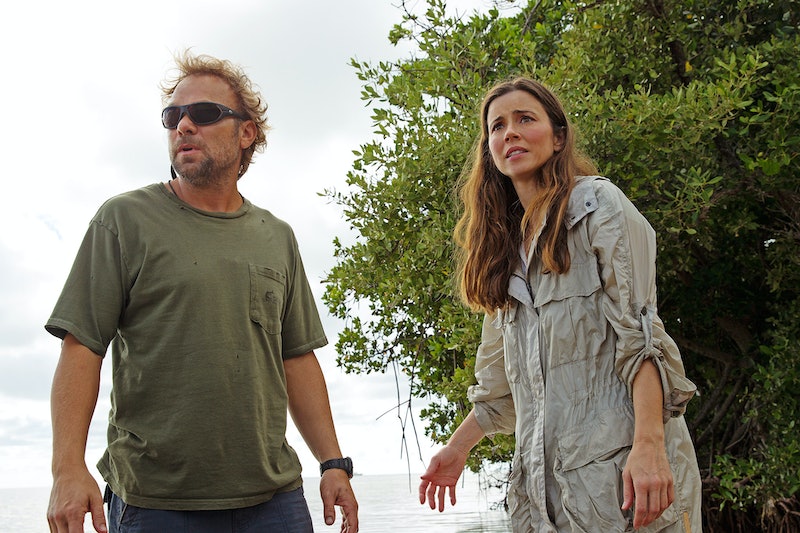 It was only a matter of time before the Rayburn siblings turned on one another — and to say they had a massive falling out in the Bloodline Season 2 finale would be an understatement. Mounting circumstantial evidence and the testimony of Eric O'Bannon meant that John, Meg, and Kevin would be arrested and charged with their brother's murder. After Meg and Kevin told John they'd betray him to save themselves, he skipped town and all hell broke loose. When Kevin announced that he was going to take matters into his own hands, we had to know it wouldn't end well — but is Marco really dead on Bloodline?

The most hapless member of the Rayburn clan decided to pay Marco a visit and tell him "everything," hoping that he could save himself by pinning the blame on John. But Marco was definitely not having it and told Kevin that he had enough evidence to put all three siblings in jail. And, he took it a step further by chastising Kevin for his family's pattern of compulsively lying and only telling the truth when it benefits them. Right as Marco made clear there was no way he would cut Kevin a deal, he received a phone call from Eric who told him that John had just threatened his life and they needed to meet immediately. In a seriously unwise move, Kevin grabbed the nearest blunt object in sight and struck Marco repeatedly on the head.

Things definitely seem bleak for Marco — the last we saw of him, he was lying in a pool of blood and definitely looked dead. His only chance for survival is if he gets medical attention STAT and I wouldn't rule out that possibility. Kevin is an unpredictable character, so it's impossible to know what he'll do after the attack. However, he may panic and call Meg and, if that happens, she might choose to rush her former fiancé to the hospital in an effort to save his life. (Provided he's still breathing, of course.)

However, it seems more likely that Marco is dead and there are now not one but two murderers in the Rayburn family. Bloodline is created by the same team that produced Damages and the two shows have many similarities, such as the nonlinear narrative style. Major characters were killed off multiple times during Damages' five seasons (usually in fairly gruesome ways), so the showrunners don't seem to have any qualms about using this plot device.

Furthermore, Marco's murder would add another complicated layer to the show's plot and it would make Season 3 more interesting. If he survives, we can pretty much predict what will happen — John, Kevin, and Meg will end up in jail. Yes, the cops would have to locate John first, but it probably wouldn't be that hard to find him because he didn't exactly plan his escape very thoroughly and he's going to have to use a credit or debit card at some point in the near future.

With Marco dead, there will be more time to explore the Rayburn family dynamics. As John drove away from the Florida Keys and Kevin attacked Marco, Meg went to Sally and it was heavily implied that she was about to tell her the truth about Danny's murder. It will be incredibly interesting to see how Sally handles this and it would be a great opportunity to explore the intense interactions that will occur between she and her surviving children.

It seems inevitable that John, Meg, and Kevin will ultimately be arrested for Danny's murder — but Marco's death means we'll get some more time to see them grapple with their guilt. All three siblings reached their own breaking points in the finale and I'd like to see more family interactions occur outside a jail cell, especially now that Sally is in the know. Marco's murder will undoubtedly cause Meg to unravel even more and it will be interesting to see Kevin attempt to cover up the crime without his brother's help. So, unfortunately for Marco, his death seems like the best way to move the plot forward if the show returns for a third season.

More like this
'Ghost In The Shell: SAC_2045' Was Only Supposed To Last Two Seasons
By Kadin Burnett
What’s New On Netflix: 'Stranger Things' & 'Somebody Feed Phil' Return
By Arya Roshanian
'Heartstopper's Kit Connor Revealed His Hopes For Season 2
By Nola Ojomu and Sam Ramsden
17 Hilarious British Comedies On Netflix
By Sophie McEvoy and Sabah Hussain
Get Even More From Bustle — Sign Up For The Newsletter