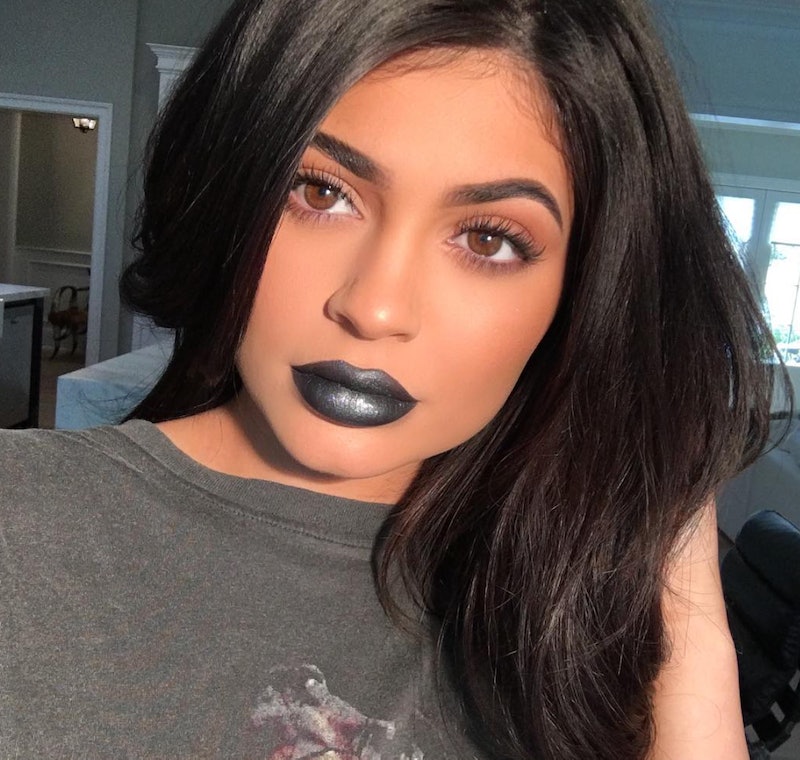 You will be able to get your goth on sooner than you think! Ever since Kylie Jenner revealed Majesty, the black lipstick which is part of her Metal Mattes collection, fans and devotees have been wondering when the makeup mogul will release the deep, dark shade. Well, guess what? The official Kylie Cosmetics Instagram posted a photo of its guru rocking the shade yet again and shared when this shade will be available in the caption. When can you buy the Kylie Majesty Metal Matte black lipstick?

According to the Insta post, it's "launching this month." That means June. There is a Kylie Lip Kit restock planned for this Monday, June 6. But the brand has not confirmed whether or not this on-sale will include Majesty. All of the matte Lip Kits are being replenished and those are the only concrete details.

In this lighting and with this filter, Majesty, which has now been referred to as "Ky Majesty," looks super metallic and has an almost patent leather finish. The silvery sheen is contrast to her BFF and trusty Kylie Lip Kit tester Jordyn Woods, who wore the shade earlier this week in a way that looked majorly matte.

All it means is that this Kylie Metal Matte is super versatile and can morph into a variety of looks.

Here's the snap confirming that Majesty/Ky Majesty is coming soon. Jenner paired the lipstick with some serious bronzer in this photo. But check out the shimmery and silvery sheen. It's so multi-dimensional.

It has a silvery x blue tint to it, as well. It also matches Jenner's brows and hair.

Woods x Ky Majesty. It's deeper, richer, and more matte with this lighting and filter.

You can get your goth on via your lips with Ky Majesty or Majesty, which may have gotten a slight name change.