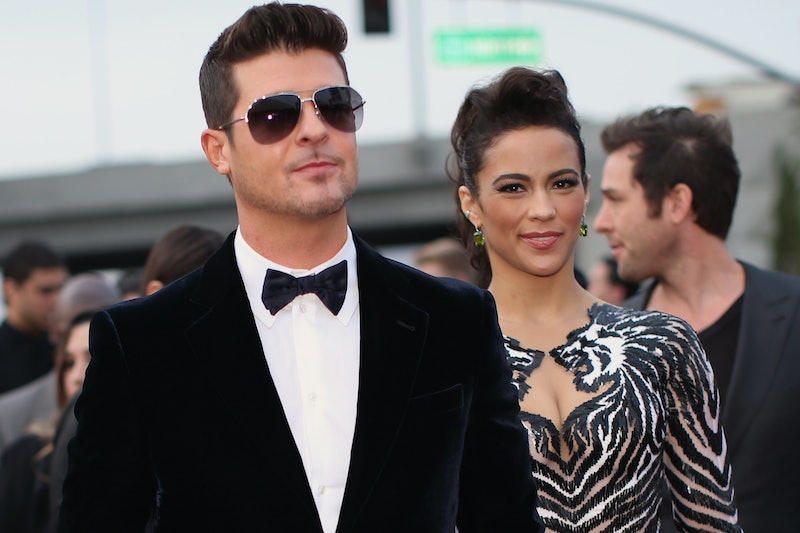 Even though "Blurred Lines" singer Robin Thicke and his wife, Paula Patton, announced their separation on Monday, Thicke reportedly tried to smooth things over the previous Friday. Robin Thicke canceled his concert in Atlanta and flew to Canada to see Patton, TMZ reports. The outlet says that Patton told Thicke on Friday that she wanted to end their nine-year marriage, so he blamed his concert cancellation on "throat problems" and wanted to be with her to change her mind.Patton, who is in Canada because of a movie shoot in Vancouver, reportedly had a "long, face-to-face" talk with her husband, and they both realized they had been arguing too much. The outlet's sources say that Patton was bent on ending their marriage, so Thicke "reluctantly" agreed. Both were reportedly upset. On Monday, Patton released a statement to People, saying, ”We will always love each other and be best friends, however, we have mutually decided to separate at this time.”

Controversy has trailed Thicke ever since his controversial “Blurred Lines” performance with Miley Cyrus at the MTV VMAs last year. Rumors of an impending separation for the couple were at an all-time high when inappropriate photos of Thicke touching or dancing with other women leaked onto the web. Robin cancelled his Orlando concert on Saturday so that he could spend time with he and Patton's three-year-old son, Julian Fuego. The two were seen at Disney World riding rides instead, without Patton.

More like this
Meghan Trainor & Daryl Sabara Are Expecting Their Second Baby
By Jake Viswanath
Adam Levine & Behati Prinsloo Welcome Their Third Child Together
By Jake Viswanath
Hilary Duff's Husband Matthew Koma Has Her Name Tattooed On His Butt
By Jake Viswanath and Stephanie Downs
Beyoncé Just Announced Tour Dates: Here's How To Cuff Tickets To Her 2023 Shows
By Jake Viswanath
Get Even More From Bustle — Sign Up For The Newsletter
From hair trends to relationship advice, our daily newsletter has everything you need to sound like a person who’s on TikTok, even if you aren’t.