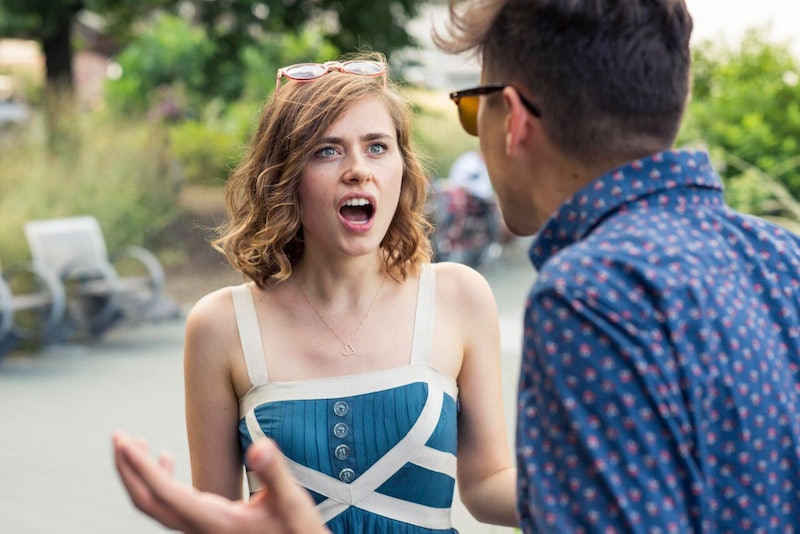 I love satisfying revenge in movies. You know, the kind where one character betrays the other, and, long story short, someone's house gets burned down. But — surprise! — in real life, burning someone's house down is just one of many things you should never do to your partner, no matter how mad you are. That one's pretty obvious (I hope), but there are also some less dramatic, equally as serious offenses that often get a pass. There's a lot of mean, controlling, manipulative, and dangerous behavior that gets packaged as empowerment in the media, but is actually super unhealthy in the real world of real people.

Revenge feels good. I've had plenty of people tell me that when I worked with couples, both as a Domestic Violence Victim Advocate and Planned Parenthood Certified Responsible Sexuality Educator. It feels like you're getting yours, like you don't take anyone's crap, and like you're in control of the situation. But there are far healthier and more productive ways to express your hurt and anger. And there are far more legal ways to teach others how to treat you. Check out this list of offenses to see if you're guilty of any of these crimes of passion. And come back to this article whenever you feel your body fill up with criminal intent.

1. Going Through Their Phone

Stop. Do not pass go. Do not collect the number of your partner's alleged side person. I know the temptation is strong, but going through your partner's phone without permission is a huge violation of both privacy and trust. You have to communicate with your partner about your fears and suspicions. That's how healthy relationships work. And if you can't do that, or can't trust what your partner says to you, then they shouldn't be your partner. It's a hard pill to swallow, but it's the truth.

2. Hitting Up Their Squad For Info

When you can't talk directly to your partner, so you hit up their squad about what they're doing or how they feel, you're essentially asking your partner's closest friends to betray them. It puts them in impossible positions, especially if they consider you a friend, too. There are exceptions, of course, like when you're on the hunt for the perfect anniversary present. But in general, go right to the source instead of the source's friends.

Aside from being a dick move, destroying your partner's stuff is a crime, and can be seen as abuse, depending on the circumstances. If you want to throw the jewelry they gave you in the ocean or run over the stuffed animal they gave you repeatedly with your car, that's fine. That's your stuff. But their stuff is off limits, no matter what they might have done to deserve your rage.

There's this pervasive undercurrent of thought surrounding stalking that romanticizes it. Anyone who is a true victim of stalking knows it's a nightmare. It's also punishable by law, even though stalking cases, like rape cases, are under-prosecuted. So if being a good person doesn't matter to you, just remember that you probably don't particularly want to go to prison. That means no driving by your partner's house every day, no parking outside their work to make sure they're actually at work, no letters, gifts or contact if they've asked for space, and no repeated stalking of their social media. It's not proof of how much you care. It's illegal and traumatizing. You're better than that.

Revenge sex looks like this: your partner cheats on you. So to even the score, you cheat on them. Because fairness. Even if your partner wants you to do this because they think it will fix things and even the score, it's never a good idea. If one person cheats, and you're going to stay together, you're going to have a lot of hurt to work through and a lot of trust to rebuild. You don't want to double that, no matter how "fair" it seems. You're just asking to make your life harder. Plus, my kindergarten teacher used to say "two wrongs don't make a right." She was really smart.

6. Keeping Them From Their Children

A person can be a terrible partner and an excellent parent, all in one. The way you feel about your partner doesn't have to be the way your children feel. If your partner is abusive, or if it's dangerous for your children to be with them, that's one thing. But if you're just mad at your partner, keeping your kids from their other parent is selfish and irresponsible. It takes some real maturity to be in a bad place in your relationship with your partner and still respect and acknowledge their role as a parent. It's OK to need help with these decisions, or to ask for mediation if you're unsure. But kids should never be used for revenge or punishment.

Believe it or not, a lot of people are confused about what counts as physical abuse. I heard so many people say, "I didn't abuse them. I just shoved them out of the way so I could leave." Meanwhile their partner has five stitches in their head from where it hit the wall. Or, "I'm not an abuser. I just grabbed her to get her to stop running away." Or my favorite: "I was drunk so I didn't know what I was doing. That wasn't the real me." No matter the reason, any time one person uses their physical body (or an object) to intentionally cause harm to another person, it's violence. Abuse doesn't just look like the mean guy in the movies who beats the snot out of his partner's face. It can look like a big collection on "little" acts, like shoving or grabbing. Don't put your hands on your partner in anger. Or any other body parts, for that matter. Ever.

Ghosting, as you probably know, is being in a relationship one minute, and dropping off the face of the earth the next. In cases of abuse, or seriously unhealthy relationships, ghosting is totally understandable (and encouraged) for safety and emotional/mental health purposes. But in general, it's not the way grown people handle their scandals. If you've shared part of your life with someone, no matter how mad or hurt you are, you should communicate clearly to them that the relationship is over instead of just disappearing.

9. Destroying Them On Social Media

This one's hard. I'm a healthy relationships expert, and even I told Facebook that my partner cheated on me, and who she cheated with, out of pure spite. But it's not the right thing to do, even though it seems really satisfying (and kind of like a public service). It's not fair to your partner, who likely doesn't get to participate in the conversation. Plus you may be inadvertently hurting their family and friends. Better to keep that stuff private or limited to a small group of friends. You'll thank me later when you're not eyeballs deep in online drama.

Next time someone in your squad shares their devotion to you by suggesting you slash your partner's tires, just let them know you're on that grown person vibe instead.