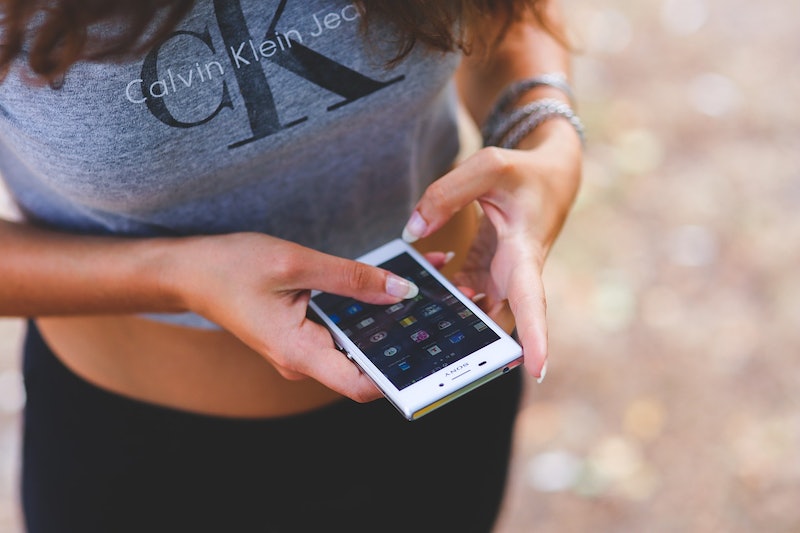 The hottest new trend in dating isn't an app, it's a disappearing act. Everyone is taking about ghosting, first lamenting the practice and then the inevitable pushback by its defenders. What is it? According to a recent New York Times article it's used "as a verb that refers to ending a romantic relationship by cutting off all contact and ignoring the former partner’s attempts to reach out". Or, in other words, just disappearing without an explanation. It can happen at any stage in a relationship, whether it's after a few dates or in way in deep to an actual relationship. At first everyone was aghast at the behavior, but as more and more people are coming out to defend it, I have to call bullsh*t. Ghosting isn't OK.

Why are we being so quick to defend something that's just kind of lazy and sickish? Shouldn't the bar be a little higher? I know breaking up is hard and awkward and it can feel like there's no right way to do it. But you need to just do it. Plus, I think maybe people have gotten too caught up in using the new jargon and are instead using it to describe a lot of different scenarios that don't actually all mean the same thing.

It's Not The Same As Escaping An Unhealthy Relationship

OK, so a lot of the defenses of ghosting, both by journalists and by commenters, talk about escaping terrible, even abusive relationships. That's self-preservation and obviously not anything anyone would criticize. It's laudable and brave. But I don't think that's what a lot of people mean by 'ghosting'. It may result in the same action — i.e. breaking things off without explanation or contact— but it's not the same. There are obviously grey areas where someone is a dick and doesn't realize what's happening so feels ghosted, like one story of a woman who was waiting for her (terrible) boyfriend to apologize, and when it never came she never got in touch. But it would be wrong to assume every time we're talking about someone disappearing it's for a good reason. I know friends who have been ghosted after three months of dating and talking everyday, and all of a sudden it's "So is 8 OK on Friday?"... *TUMBLEWEEDS TUMBLEWEEDS TUMBLEWEEDS FOREVER*! I think they're are a lot of very different scenarios and it's lazy and misleading to lop them together.

The other main argument to defend it that it's clear to the person being ghosted what is going on, that they're not idiots and can get the message. As Alexander Abad-Santos says in The Wire:

"No person who has gone on dates in the last six years is genuinely confused about the message that ghosting sends. We live an age where we can listen to whatever songs we want at any moment, get in touch with anyone at any second, and order mozzarella sticks or a hookup with flick of an app. If someone you're interested in isn't answering your texts within five minutes, they are either dead, at a movie (and still have manners), or just don't want to date you."

Well yes, obviously it's clear... eventually. See, Not everyone replies to our texts every five minutes. I don't feel the need to be in contact that often. So if if you text someone every day or two, there's definitely an awkward few day period where you're not sure if the person is going to get back to you or not. As I've said before, it's not a massive, earth shattering deal, but it's really irritating when you're trying to make plans for the weekend or figure out what's happening next. And not knowing where you stand is the worst. It's inconsiderate and just kind of shitty.

It's Lazy And Patronizing

One of the things I don't like about it is that it's either just incredibly lazy to not bother to even send a text saying things aren't going to work or there's an implication that you're avoiding it because the other person will respond with histrionics. Give them more credit. When it's early days I've broken off things off via texts or had it done to me, as have many of my friends, and it's always just a short, polite exchange. Granted if it's a serious, long-term relationship I wouldn't use a text, but if it's short term— well, I've never assumed someone is so hung up on me I can't tell them I'm not interested because the grief will just be so consuming. Get over yourself. They probably just want to know if they can set up a different date for Saturday.

The Timing Shouldn't Be Ignored

It's wrong to write off ghosting as A-OK because it ignores the context in which it's developed. Yes, I'm sure it's always happened, but it's happening more now, in the age of Tinder and swipe-swipes. I've said before that the way we communicate over these apps and the totally overwhelming number of potential partners, leads us to space out and treat each other badly. I'm new to dating apps and I really think that, in some ways, they make me a worse person. I don't reply to people, I fade off halfway through a conversation. That's not who I am in real life, but it's who I am on apps.

Ghosting, if not a new phenomenon, has been incubated this culture. Because if I do it on apps, how long before I start doing it in real life? It won't continue to exist in isolation, it'll seep into other ways I communicate. It's a trend I think we should resist, and criticize, because it's worse for all of us. And even for those who don't agree me, like Niko Lang at The Daily Dot, who is quick to emphasize that ghosting has always happened and warn against blaming recent technology, remember that in any case the technology today makes it even less acceptable. You can choose a thousand different mediums in which to break something off (all of which will take you about three minutes of effort), and, if you don't, you know it's going to be worse for the person you're leaving hanging because they're probably connected to you on Twitter/Facebook/Instagram/whatever. Just don't be an ass.