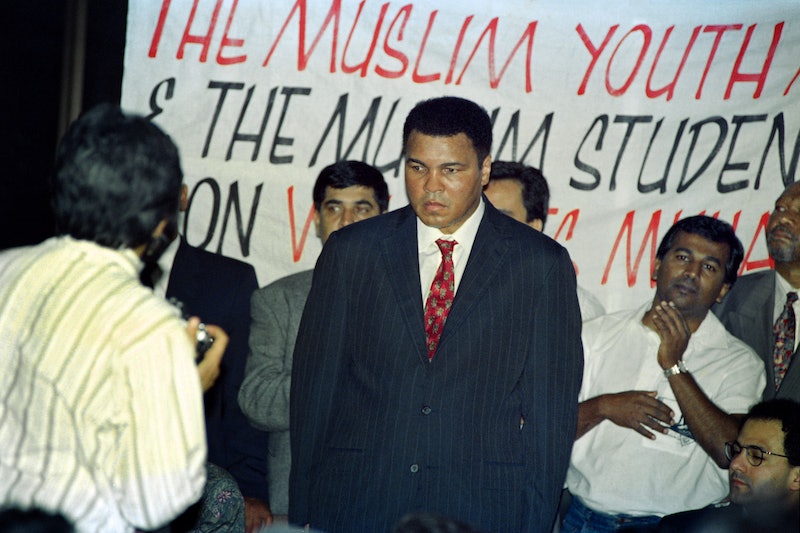 Devastating news late Friday night. Muhammad Ali, born Cassius Clay, Jr., passed away in the late hours of Friday night, aged 74, at a hospital in Phoenix, Arizona, due to a respiratory disease. Ali's life was notable for its richness: Ali didn't just fight battles in the ring, but also in public. Significantly, he refused to fight in the Vietnam War in 1967, citing his religious beliefs the reason for this — he converted to the Nation of Islam in the 1960s and later identified as Sunni Islam. But, why did Muhammad Ali convert to Islam? Ali's religious journey was as nuanced and complicated as his life itself.

Ali originally became interested in religion after he pledged allegiance to the Nation of Islam in 1964, a completely different animal to Islam and a religious organization that according to Ali's biographer, Jack Cashill was preaching "segregation, [fantasizing] about genocide, and [horrifying] the serious civil-rights liberals of that era, black and white." It was a life-changing decision: The boxer, who was then known as Cassius Clay, was given a new name. Ali said at the time, according to The Independent, "I am Muhammad Ali, a free name — it means beloved of God, and I insist people use it when people speak to me"; he also referred to his old moniker as a "slave name." It wasn't until 1975 that Ali converted to the much more mainstream Sunni Islam.

The Nation of Islam was controversial during its time, to say the least, and often took radical stances on various subjects. But naturally, Ali's version of Nation of Islam seemed much more compassionate: His anti-war stance led to him being sent to jail following his refusal to enlist, as he cited his religious beliefs as a reason for why he couldn't fight in the Vietnam War. But Ali's politics and religious beliefs have often seemed intertwined. In the video below, he outlines his reasons for not fighting in the following:

My conscience won’t let me go shoot my brother, or some darker people, or some poor hungry people in the mud for big powerful America. And shoot them for what? They never called me nigger, they never lynched me, they didn’t put no dogs on me, they didn’t rob me of my nationality, rape and kill my mother and father… Shoot them for what? …How can I shoot them poor people, just take me to jail.

It's probably no coincidence that 1975 marked two events: the death of Elijah Muhammad, who had led the Nation of Islam, while Ali was a follower, and Ali's conversion.

According to a VOA News article, Ali wrote about this time in a 2004 biography. "The Nation of Islam taught that white people were devils. I don't believe that now; in fact, I never really believed that. But when I was young, I had seen and heard so many horrible stories about the white man that this made me stop and listen."

But this conversion didn't imply any lessening in Ali's commitment to his God. A 2005 Belief Net interview with his daughter Hana Ali shows just how intensely religious he remained throughout his life:

My dad feels guilty when he doesn't get to pray five times a day. Sometimes it's more difficult for him to actually get down and pray. When the Parkinson's accelerated, he stopped getting up at 5 a.m. to pray.

Hana also explained the causes for his final conversion in his life, to Sufi Islam in 2005:

My father has a collection of books by a man named Hazrat Inayat Khan. They're Sufi teachings. He read them front to cover. They're old and yellow and the pages are torn. They're amazing. He always says they're the best books in the world.

My father is very spiritual-more spiritual now than he is religious. It was important for him to be very religious and take the stands he did in earlier years. It was a different time. He still tries to convert people to Islam, but it's not the same. His health and his spirituality have changed, and it's not so much about being religious, but about going out and making people happy, doing charity, and supporting people and causes.

Perhaps one of the most inspiring things about Ali was his ability to confront himself and question his own beliefs: His spiritual journey is just proof that he never stopped challenging himself and reformulating what he believed in to reflect his growth. No matter what belief or lack thereof we possess, it's inspiring to think of a man who channeled his beliefs into external good for the world: charity and happiness for those who surrounded him.

More like this
Read Dan Levy's Heartbreaking Message After The Club Q Shooting
By Stephanie Topacio Long
Iran Has Issued A Death Sentence Over Mahsa Amini Protests
By Catharina Cheung, Darshita Goyal and Maxine Harrison
Prince William Condemns “Unacceptable” Comments Made To A Black Guest At Buckingham Palace
By Shahed Ezaydi
Ayurvedic Principles & Family Are At The Root Of Fable & Mane
By Justine Knight
Get Even More From Bustle — Sign Up For The Newsletter