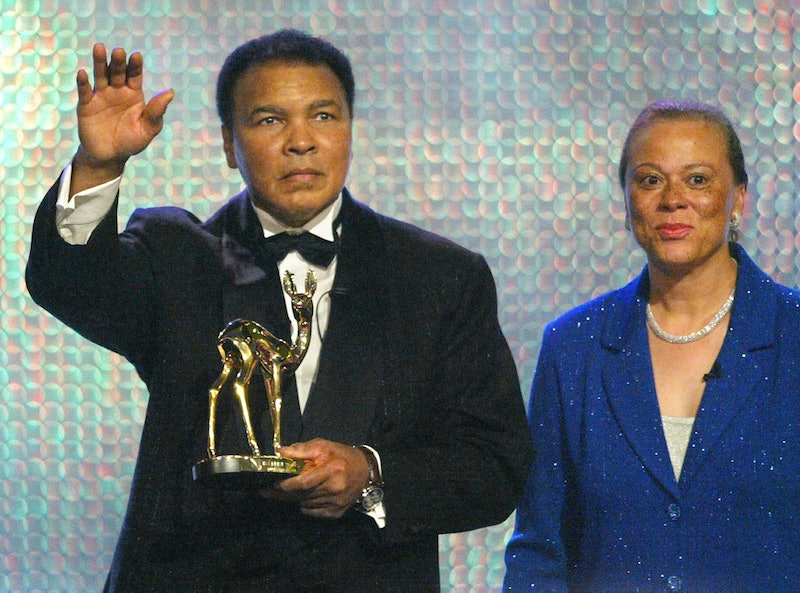 The world has lost another great: Three-time World Heavyweight Champion Muhammad Ali has died at the age of 74, leaving behind a legacy that includes countless wins within the boxing ring, as well as a passionate commitment to social justice and political activism. He leaves behind a large family as well. Who was Muhammad Ali married to? The celebrated boxer was married four times and has nine children. He was married to Yolanda "Lonnie" Williams at the time of his death.

Ali, who was born Cassius Clay in 1942, married Williams in 1986, though their relationship goes way back — the two actually knew each other in Louisville (Ali's hometown) and had been friends early on in Ali's career. During their marriage, the two adopted a son together, Asaad Amin. They were living in Scottsdale, Arizona, at the time of Ali's death. Ali had been hospitalized at the Scottsdale Osborn Medical Center in Phoenix, Arizona, with a respiratory infection Thursday evening.

Ali married his first wife, Sonji Roi, in 1964, four years after winning a gold medal at the 1960 Olympics in Rome. Their romance was brief from the start — they had married after only a month of dating, and divorced in 1966. He married his second wife, Belinda Boyd, in 1967. He was also married to Veronica Porsche Ali from 1977 to 1986.

A spokesperson for Ali's family, Bob Gunnell, confirmed Ali's death in a statement:

Gunnell added that “the Ali family would like to thank everyone for their thoughts, prayers, and support and asks for privacy at this time.”

His daughter Laila Ali changed her Facebook profile photo on Thursday to be a picture of her with her father after she won the WBC/WIBA Super Middleweight title.

A funeral service for Ali will be held in Louisville, his hometown. It's clear the World Champion boxer will be missed.