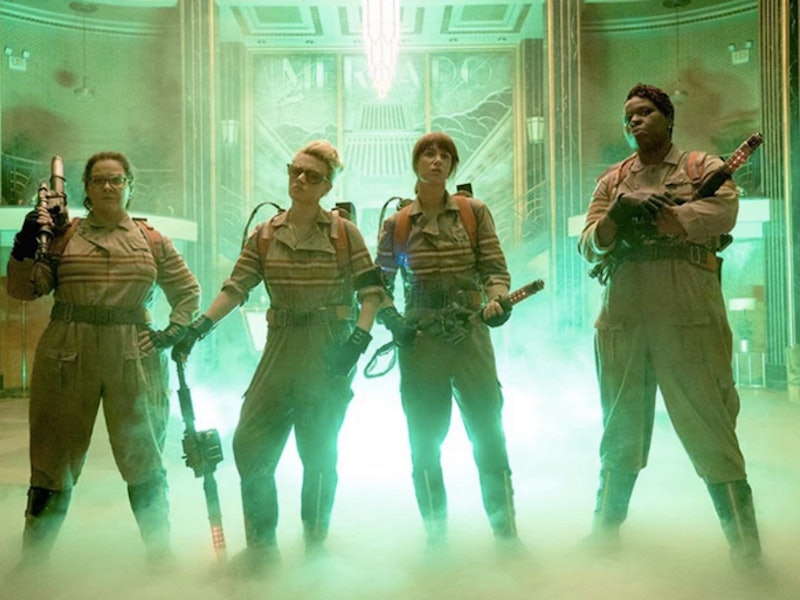 Just a few days after star Melissa McCarthy gave her two cents on the movie's sexist criticism, Ghostbusters director Paul Feig is speaking out about the misogynistic comments that've been hurled at his movie. At the annual Produced By conference held on June 4, Feig, who also directed the women-led Bridesmaids and Spy, addressed the criticism his movie has faced since the all-female Ghostbusters remake was announced in 2014. “I have been hit with the most misogynistic stuff," he said, according to Entertainment Weekly. "The onslaught that came in was just so chilling.

Feig went on to describe the ways in which the film has been dismissed by the media:

It’s my fourth film and we are struggling every day to go against that bias. We still get called in the press as a ‘chick flick.’ We are always referred to as the all-female Ghostbusters. It’s just an uphill battle and I can’t believe we are having to deal with it.

Not only has the movie received backlash from the public — the Ghostbusters trailer is the most disliked of all time on Youtube—but Feig himself has apparently received sexist comments about working with women actors. “I had some male producer say, ‘Oh boy, get ready. It’s going to be tough, you’re going to have catfights,’” he said at the conference. “And I said, ‘Who the f**k are you?’ It was the most wonderful experience I’ve had.”

It's good to hear him have such a strong response to the hatred, but Feig's comments point to a bigger issue, namely the inherent sexism of his reboot always being defined by the gender of its stars. Movies with all male protagonists are not called "all-male" movies or "guy flicks"; they are just, well, movies. While some might define a chick flick as a film with romance or friendship as its central theme, or as a synonym for "romantic comedy," the plot of Ghostbusters does not fit that description. Instead, people seem to be calling it a "chick flick" simply because it stars all women, and they're using that term to imply that the movie is of less important than other films.

Just as there are "novelists” and then "women novelists," there are “movies” and then “chick flicks.” Whoever is in power takes over the noun — and the norm — while the less powerful get an adjective.

Many great films, from Thelma and Louise to Bridget Jones's Diary, have fallen under the "chick flick" category, and many of the themes associated with chick flicks, such as friendship, love, and motherhood, are hugely worthy of cinematic exploration. However, the term has often been used to dismiss both those movies and the women who watch them, demeaning "chick flicks" as second tier art. Feig's comments raise a great, if frustrating, point, and it's time for everyone to start taking both Ghostbusters and more films with women leads seriously.

More like this
Gassed Up Promises All Things Action, Risk, & Redemption
By Frances Stewart
What's New On Netflix: A Third '365 Days' Movie & Lili Reinhart’s New Film
By Arya Roshanian
What’s New On Netflix: 'Never Have I Ever' & 'Indian Matchmaking' Return
By Arya Roshanian
'The Capture' Is Finally Back – & S2 Looks Tense AF
By Sophie McEvoy and El Hunt
Get Even More From Bustle — Sign Up For The Newsletter