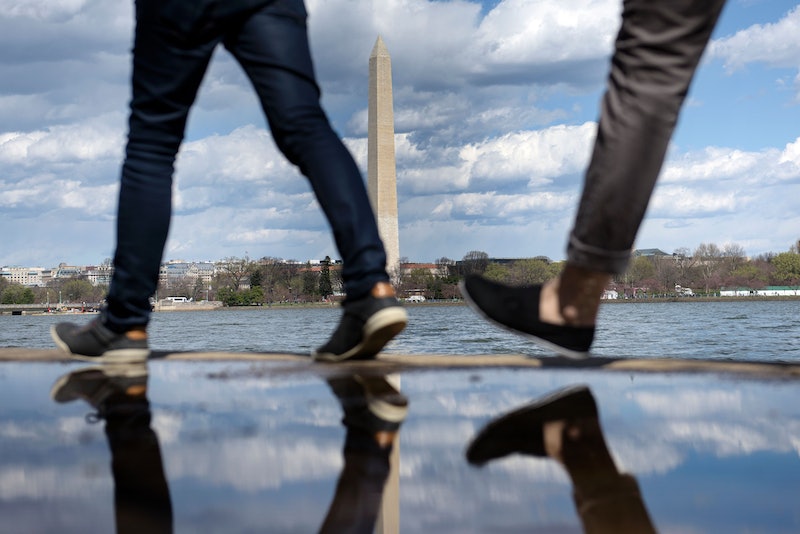 If you keep up with U.S. politics — and with the 2016 presidential election drawing closer, you probably do whether you want to or not — you may be wondering what is the Reason Rally? Earlier this weekend, thousands of nonreligious people gathered at the National Mall in Washington, D.C., to demonstrate the political power of people without a religious affiliation. Claiming to be the "biggest gathering of nonreligious people in history," the event took place on Saturday, June 4, and featured a number of guest speakers: Famous science educator Bill Nye made an appearance, along with comedian Lewis Black and members of the hip hop group the Wu-Tang Clan.

As for the rally? Organizers write on the rally's website that it is a celebration of the secular community, but it is also intended to display the "presence and power of the nonreligious voting bloc, and to demand that reason be put at the forefront of our public and political discourse." According to the Huffington Post, topics of discussion included science- or religion-centered issues such as reproductive rights, climate change, and of course, the separation of church and state.

Liddell added that the rally is intended to be political, especially in light of the upcoming election. (The first Reason Rally also took place during an election year, back in 2012.) Although evangelical Christian candidates like Ben Carson and Ted Cruz are no longer in the running, the fact remains that the vast majority of American politicians identify as religious. In 2015, the Huffington Post reported that more than 90 percent of the 114th Congress identified as Christian, and just one member, Arizona Congresswoman Kyrsten Sinema, is unaffiliated with a religion.

Considering that a 2012 poll found that 46 percent of Americans wouldn't vote for an atheist political candidate even if they were well-qualified, this may come as no surprise. However, this also means that 54 percent would vote for someone who wasn't religious — in comparison, a 1958 poll asking the same question reported that just 18 percent of respondents would vote for an atheist. This reflects a larger cultural shift away from organized religion in the general population; according to the Pew Research Center, approximately 20 percent of the U.S. public consider themselves religiously unaffiliated.

Although organizers apparently hoped for at least 30,000 attendees, CNN reports that "attendance [has] seemed somewhat more sparse" for this year's Reason Rally, which began with an advocacy day on Thursday, June 2 and lasts through Sunday, June 5. Americans may be increasingly non-religious, but perhaps they aren't ready to demonstrate it to the entire nation just yet.