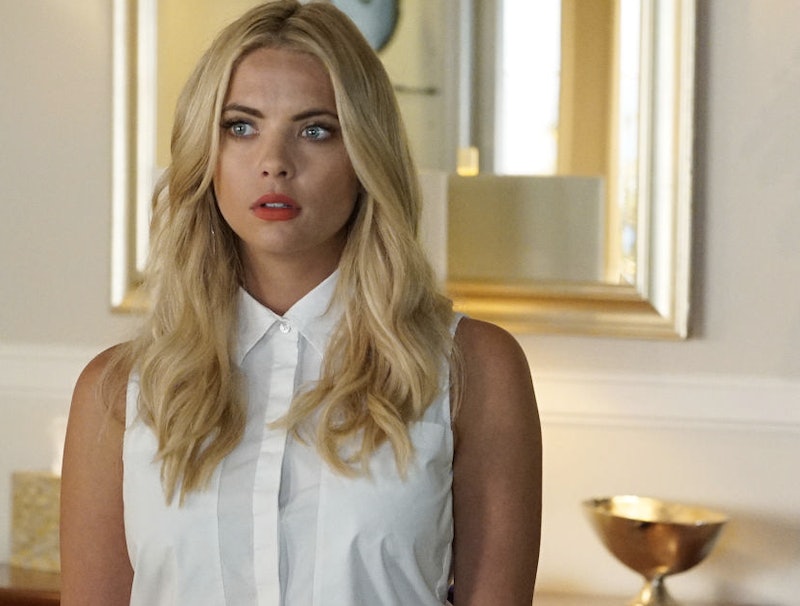 The Season 6 finale of Pretty Little Liars did more than reveal Jessica DiLaurentis' twin and Dr. Rollins' unsavory motives for marrying Alison — it also put Hanna in a whole lot of danger. After setting a trap that the Liars hoped would stop Uber A once and for all, the show's baddest villain to date pulled one over on them by capturing one of their own. Hanna was taken by A.D. in the Pretty Little Liars Season 6 finale and now her fate hangs in the balance — perhaps literally, given that the Season 7 promo features a blonde body hanging from ropes in the bell tower. So is Hanna really dead on Pretty Little Liars , or about to be? Though the cast has stayed tight-lipped about her fate, in an interview with Bustle, Ashley Benson suggests that we should all be very worried about Hanna — even if she survives her kidnapping.

"Hanna has been abducted by A, and she's being tortured and abused in all kinds of ways," Benson says of what's ahead."The [Liars] are trying to save her." It sounds like fans might be having flashbacks to Charlotte's dollhouse when Pretty Little Liars returns to Freeform for Season 7 on June 21 at 8 p.m.

Unfortunately for the Liars, Benson reveals that A.D. will be nothing more than a "shadowy figure" to Hanna, so she won't be able to help identify the villain and she warns, "[at] this point, everyone is a suspect."

However, A.D.'s identity may not be the biggest surprise ahead. Benson teases that the person who rescues Hanna will serve as quite a shock. "To be honest, with Hanna's rescue, it won't be who you will think it will be, it terms of helping Hanna get it together and try to find a way out or stay alive," she says.

No matter how surprising they may be, I'm already thankful to the character who helps Hanna survive her terrifying abduction.

More like this
Every Horror Movie Reference In The 'PLL: Original Sin' Premiere
By Alyssa Lapid
The 'PLL: Original Sin' Creators Say A’s Identity Will Be “Very Clear” By The Season Finale
By Alyssa Lapid
Netflix Reveals First Look At Wednesday In The 'Addams Family' Spinoff Series
By Bustle Editors
Here’s When 'She-Hulk' Takes Place In The MCU
By Brad Witter
Get Even More From Bustle — Sign Up For The Newsletter