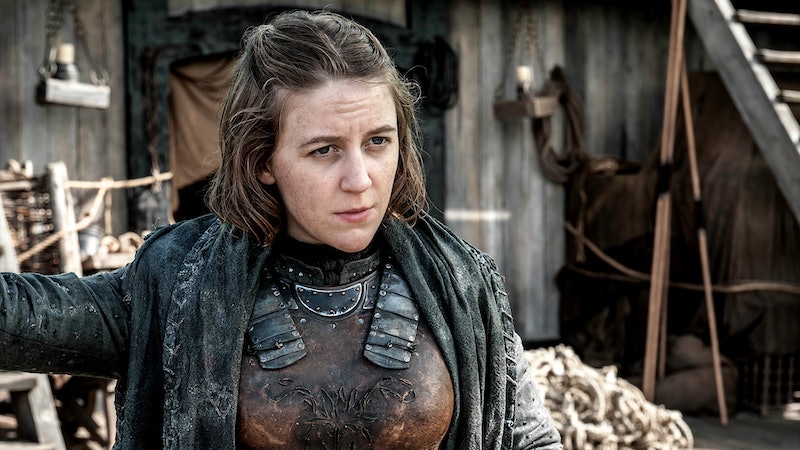 If there is one thing Game of Thrones doesn't get enough credit for, it's their representation of LGBT relationships on the show. Sure, Loras was thrown in a prison cell for liking men, but that's just the High Sparrow being a wackjob, not the show treating gay people without respect. Prior to the Sparrow being the worst, Loras' sexuality was of little concern to the show or the people closest to him — in the best way. Margaery was never angry at her brother for being with her husband, or at her husband for not being attracted to her. (R.I.P Renly.) The show never made a huge deal out of Loras and Renly's love scenes or Oberyn's bisexuality (an identity in itself that is a rarity on TV). Then, this Sunday, Game of Thrones showed that Yara Greyjoy likes women, and she was treated the same as any other person would be treated. She made out with a woman while giving Theon a weird, kind of unhelpful, but ultimately hilarious pep talk, and then she walked off to have sex with a woman. NBD.

She didn't have a big coming out moment; she just was who she was. While I think coming out stories are important when treated properly and actually called for, I loathe when shows make a dramatic to-do about a gay character for no reason other than to make a big deal about the show's increased representation. It just makes gay relationships stand out even more, when what many gay people (myself included) want is to have our sexualities treated without concern or drama and just treated as natural because they are.

At some point gay storylines will exist on TV and be so common place that it wouldn't even be worth it to write about. But, until that happens, I'll laud the shows that are doing it right. In a time when too many gay characters are dying on TV shows for what seems like just the shock factor, I appreciate Game of Thrones including Yara's storyline without any shock value. Theon isn't surprised, the people around her aren't surprised, and no one makes any gross, "I'd like to watch" jokes. As a result, the audience sees it as not an oddity, but just who Yara is: Someone who wants to get some. It just so happens that she wants to get some with a girl.