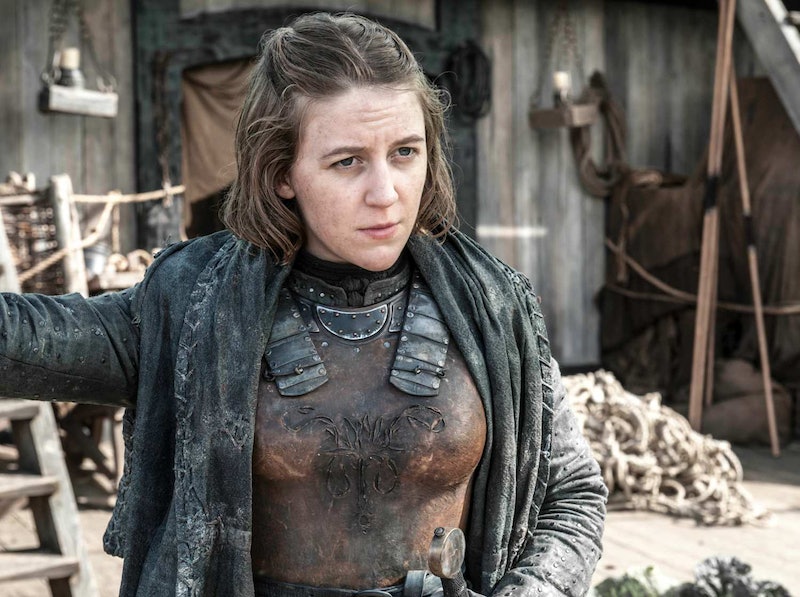 Game of Thrones Season 5 was an intense ride, and while it had plenty going for it, it was missing Game Of Thrones' very own pirate princess, Yara Greyjoy. I know isolating Yara's brother Theon with Ramsay and Sansa forced him to wake up from his tortured-induced identity issues, but the lack of Yara during Season 5 — and before that — was depressing. Yara, in case you forgot, was last seen in Season 4 after a daring attempt to rescue her brother. After being chased by Ramsay's dogs, Yara declared her brother dead and sailed away from the Dreadfort with her men. I have a hard time believing Yara would accept defeat so easily though. Her determination, stubbornness, and pride as a captain are way too strong for her to give up on Theon entirely — or to let Ramsay get the better of her. What Game Of Thrones Season 6 needs is the triumphant return of Yara, just in time to reinstate the Greyjoys as major players in the battle for the Iron Throne.

Book fans know the Greyjoys are far from minor players in the story, and it looks like Game of Thrones is already seeking an actor to fill the role of Yara and Theon's slightly bonkers uncle, Euron. Adding more Greyjoys to the mix means all sorts of exciting things — including a possible kingsmoot and more of Yara testing her power over the Ironborn. As you might have guessed, it's Yara's potential expanded role that I am the most excited about.

Yara has so much to offer the series, starting with her well-earned sense of entitlement. Her father raised her to be his heir. In the world of Westeros, where misogyny reigns supreme, Yara is one of the few female characters who feels completely confident in her role as a woman and a leader (she is similar to Dany in that way, although, I don't think she really cares about ruling all seven kingdoms — she just wants to look out for the interests of her own people). She is also remarkably level-headed and brazen at the same time.

Whereas Theon rushed to prove himself by taking over Winterfell, Yara has far more common sense. As a captain, she fully understands the need to look out for not only her best interests, but the best interests of her crew. As the Greyjoys rise in power once more, Yara has the opportunity to be a standout character next season. Her fearlessness, strength, and confidence are needed now more than ever.

With so much chaos on the horizon, Yara's calming presence could lend a sense of stability to the action. And trust me — if Euron is on the scene, everyone will be begging for stability.

Additionally, among the Greyjoys, Yara is by far the most competent and fairest of all her family members. If they are going to grow in importance, Yara needs to be the loudest voice in the mix. Not only is she the most familiar Greyjoy to show viewers besides Theon, she is also the sanest.

Since her first appearance in Season 2, Yara's awesomeness has been apparent. It is time for her to finally become more than a cool secondary character though. Yara has a lot to do before this story is finished: reunite with her brother, try to stabilize the Iron Islands, and deal with her uncles, just to name a few possibilities. The longer she remains off stage, the more Game of Thrones is wasting one of its most valuable players. Yara is a boss, and a woman who plays by her own rules — she is a warrior, a leader, a strategist, a sister, someone who is sex positive, and who will not be denied because of her gender. Yara is everything Game of Thrones needs to help balance out its lady issues. Now, let's get her back on the screen and put her front and center in time for Season 6.

Greyjoys do not sow, and Yara does not like to be put in a corner. If nothing else, she needs to meet Ramsay one more time and introduce him to the business end of her ax.