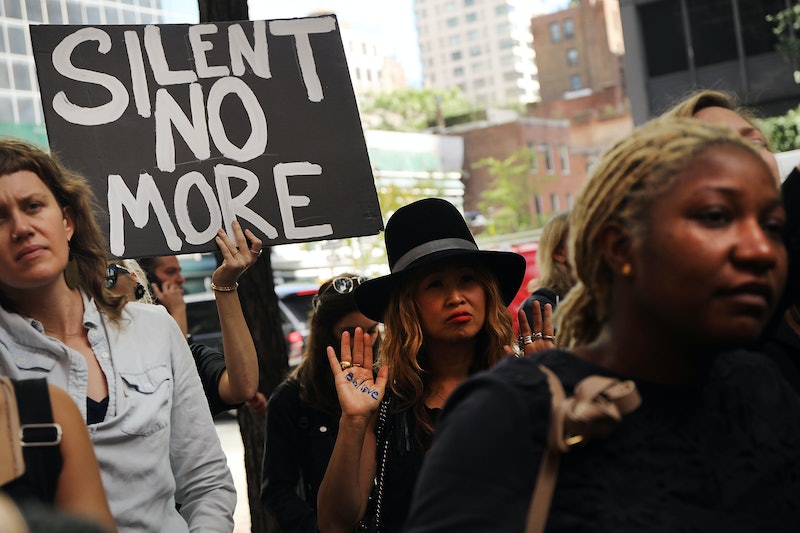 On June 2, former Stanford University swimmer Brock Turner was sentenced to six months in jail for sexually assaulting an unconscious woman. Two days later, Stanford law professor Michele Dauber, who helped establish the school's sexual assault policies, shared a letter written by Brock Turner's father, Dan Turner, to the judge to protest the decision and ask for probation instead of jail time. (Santa Clara District Attorney Jeff Rosen confirmed to The Washington Post that "the letter had been submitted to the court before Turner's sentencing last week.") And the contents of that letter show exactly what rape culture looks like. It places more value on the perpetrator's well-being than the victim's.

During the trial, the anonymous 23-year-old victim read a powerful statement describing what it was like to be sexually assaulted, and then to be doubted and blamed for it. "It’s like if you were to read an article where a car was hit, and found dented, in a ditch," she wrote. "But maybe the car enjoyed being hit. Maybe the other car didn’t mean to hit it, just bump it up a little bit. Cars get in accidents all the time, people aren’t always paying attention, can we really say who’s at fault." She also described learning the gruesome details of her assault in an article which listed Turner's swimming times at the bottom.

This focus on the perpetrator's accomplishments rather than his crime furthers rape culture by guilting victims for speaking out. The fact that he was only sentenced to six months because the judge believed "a prison sentence would have a severe impact on him" also reflects our culture's hesitation to hold perpetrators accountable, especially if they are widely admired. How about we talk about the "severe impact" his crime had on the victim? "I am no stranger to suffering," her statement read. "You made me a victim. In newspapers my name was 'unconscious intoxicated woman,' 10 syllables and nothing more than that. For a while I believed that was all I was." She continued:

I had to force myself to relearn my real name, my identity. To relearn that this is not all that I am. That I am not just a drunk victim at a frat party found behind a dumpster, while you are the All­ American swimmer at a top university, innocent until proven guilty, with so much at stake. I am a human being who has been irreversibly hurt, my life was put on hold for over a year, waiting to figure out if I was worth something.

Which brings us to this letter:

Dan Turner's letter, which is available online, starts off by explaining how sorry his son is and aims "to demonstrate the quality of his character." It describes Brock Turner as high-achieving, humble, and "a person people like to be around, whether they are male or female," as if this proves he couldn't possibly be capable of assaulting anyone — or make his assault any less significant. The letter praises his academic and athletic accomplishments and describes his difficulty fitting in socially when he started college.

Rather than condemning Brock Turner's crime, the letter laments that he has been punished for it. “Now he barely consumes any food and eats only to exist,” it reads. "That is a steep price to pay for 20 minutes of action out of his 20 plus years of life.”

"20 minutes of action." That is what Dan Turner reduces his son's crime to; what he reduces the damage that has been done to the victim to. But it wasn't "action." It wasn't sex; it was assault. And it wasn't just 20 minutes; the lives of the victim and her loved ones are forever changed.

We rarely talk about other crimes this way. We don't hear about how murderers' lives will be ruined if they go to jail, or how their victims only suffered for a few minutes. We don't detract from these crimes' severity by talking about what a great student the criminal was.

Dan Turner's letter proves the point that the victim's statement makes. Our society is strangely and disturbingly blind to the impact that rape has on the victims. Indeed, as The Washington Post points out, the letter does not reference the victim. Instead, it paints the perpetrator of the crime as a victim.

People convicted of sexual assault, particularly athletes, typically get the benefit of the doubt, while victims are bombarded with statements undercutting their trauma ("But it was only 20 minutes!") and questions like the ones Turner's victim describes:

It's difficult to face that a loved one is capable of committing such a crime. But until we admit that we're part of a society that raises rapists, potentially including the people we love and admire, we will continue to fail victims.