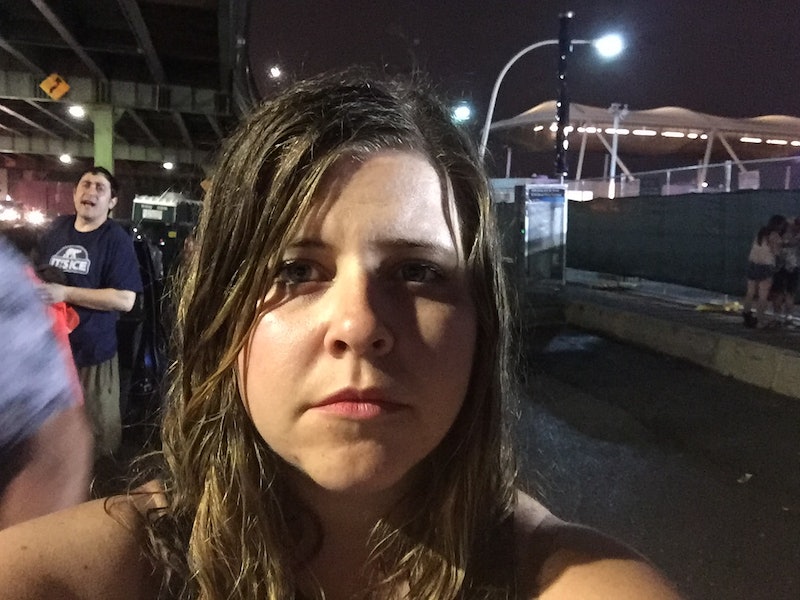 It's that time of year: Fringe is all over every H&M & Forever 21 and everyone's talking about which music festival they'll be attending this summer. But depending on where that festival is, there may or may not be the minor little threat of inclement weather, most notably rain. After attending the 2016 Governors Ball in New York — the third day of which was cancelled, to many Kanye West fans' dismay, after several severe weather warnings — I've learned quite a few things about how to stay sane and what to wear to a music festival when it rains down on your previously perfect day.

The old saying goes, "always bring a raincoat," but for festivals, I'd amend that to: Always be ready for things to get dirty and messy in a matter of mere seconds. Even without rain, I've seen perfectly normal patches of grass turn to giant islands of gooey mud after fans got way into a Future Islands set (see: last year's Governors Ball) and I've ruined more than my fare share of crisp, summer sneakers trying to avoid said mud swaths. And no, I really don't want to talk about the pair of sky blue jeans that I'll never wear again after I slipped in wet grass while dancing to St. Vincent (also last year's Gov Ball).

Music festivals are an exercise in preparedness, so if there's even a chance of rain, here's what I'd encourage you to do in preparation:

Do: Check Your Weather App Religiously

Even if you checked before you went to sleep and it says tomorrow is all clear skies, that can change in an instant. And, in my case, the forecast was rain up until I was leaving for the festival and that sunny all day forecast was a damn lie. If you see even a second of rain in that hourly rundown, prepare like you're going into a downpour. If nothing happens, there's no harm in being over-prepared.

Do: Wear Non-Sandals That You Could Stand To Throw Away

I cannot stress this enough: Mud and grass and spilled beer are not a friend to shoes. You've already got a chance of tossing your Keds if you wear them to the fest, but just imagine how defenseless that little strip of canvas is when mud is in the process of becoming more mud. Personally, I favor a cheap pair of ankle boots I got online at Target for just under 20 bucks (above). They're not so heavy duty that I get tired walking around in them and they're strong enough that I didn't have much mud seeping through. And when I threw them out before even walking into my apartment on Saturday, I felt approximately zero feelings about it.

I know you think you'll be the most prepared with your mini tent, but you will drive absolutely everyone around you nuts, plus you'll have to be holding something the whole time while navigating the slippery slidey ground. And if you're hoping to catch and artist you love while holding that thing, good luck making that happen without getting heckled by literally everyone behind you. Plus, nothing is going to keep the rest of your body from getting wet, unless you've packed one of those disposable plastic ponchos. Speaking of which...

Do (Maybe): Bring A Plastic Poncho Or Raincoat

I'd call this one a personal choice. I personally would prefer just getting rained on in the summertime to wearing a plastic thing that sticks to my skin and makes me all sweaty while looking like something my dad would rock, but if you do not want to get drenched, this is a far better option than

Don't: Wear Something That Will Make You Upset When It Turns A New Shade Of Brown

I donned an all-black get-up (Old Navy tank, American Eagle denim shorts) that was ideal for the moment at which I escaped my rain shelter only to get stuck out in the downpour once more. If I'd worn the cute little white top with palm trees all over it that I'd recently purchased, I'd be cursing the weather gods right about now. Instead, by bargain black tank top can actually be salvaged to live another day.

Do: Carry A Back Made Of Something Waterproof or Near Waterproof

That rain will soak through anything. Even my beat up old leather satchel that I nabbed at a thrift store had its work cut out for it. Luckily, mine had an inner pocket that was insulated enough to protect my stuff, but my friend's tote was ruined, along with everything inside of it.

Pro-tip: You can still operate an iPhone through a Zip-lock baggie. Do this. Even if there's only a whisper of a chance of rain. This is how my roommate was able to call an Uber to pick us up in the rain, while I left my phone fortified in the depths of my dry purse.

It's a lot easier to wash mud off of your skin than it is to get it out of your killer new festival-ready bell-bottom leggings. Just saying.

Do: Enjoy The Hell Out Of The Festival Anyway

It can be tough if you weren't prepared, but even by only checking off half of these items, I still managed to dance along with Haim and their epic cover of Prince's "I Would Die 4 U" — even if I couldn't see all that well through the alligator tears falling from the sky. Also, when in doubt (and hiding from the rain), there's always SnapChat.