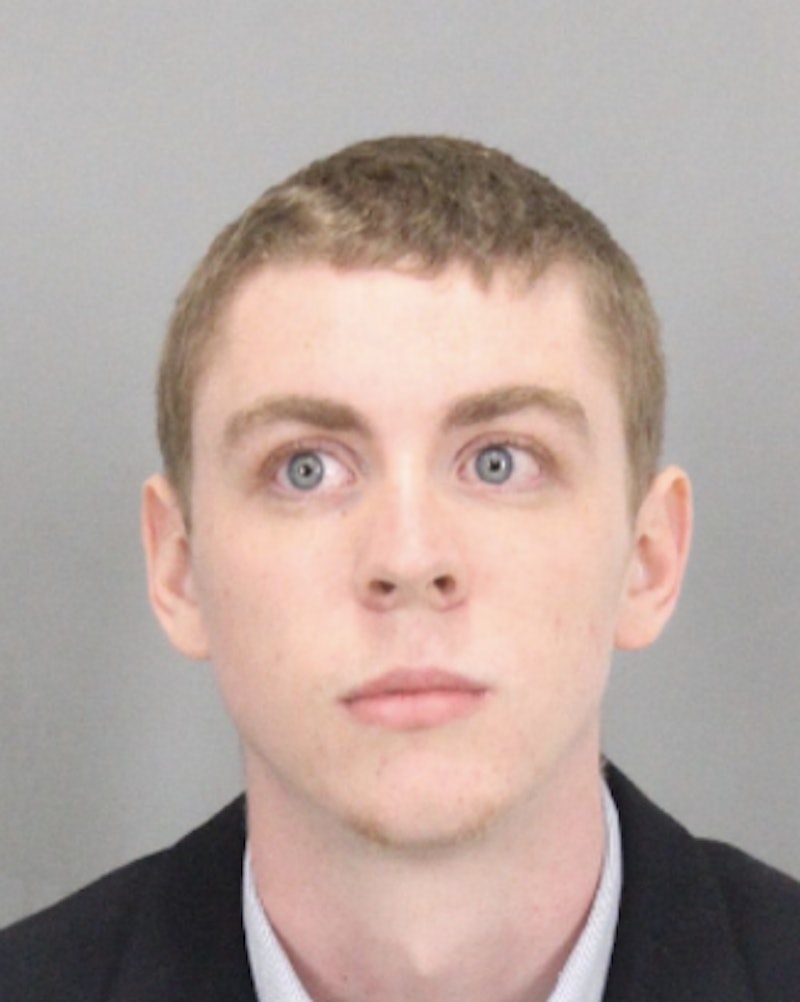 After the former Stanford swimmer was sentenced to six months in jail for sexually assaulting an unconscious woman, passionate petitions about Brock Turner calling for a retrial and for the recall of the presiding judge have surfaced on Change.org. The petitions have gained thousands of signatures after being spread via social media. For many, Turner's case serves as further evidence that sexual assault is not taken seriously in the United States. So they're turning to online activism.

In March, the 20-year-old was found guilty on three felony counts: assault with intent to commit rape of an intoxicated woman, sexually penetrating an intoxicated person with a foreign object, and sexually penetrating an unconscious person with a foreign object. During the sentencing last Thursday, prosecutors asked Judge Aaron Persky to give Turner six years in state prison — less than half of the maximum 14 years he could have faced.

For sexually assaulting the unconscious woman, the former Stanford athlete now faces less than 4 percent of the maximum sentence. Before Judge Persky made that decision, the victim stepped up and spoke to Turner directly in a powerful speech that has been widely circulated on social media:

Although many campus petitions surfaced regarding the case, some people also believe that jail time might not solve the problem, but that rehabilitation would be a better option. Despite conflicting views on the effects of imprisonment, sexual assault cases should not be viewed lightly or dismissed as "accidents." If you believe a longer sentence for Turner is the answer, there are few petitions you can sign to assert that sexual assault is no small matter.

This petition asks for a review of the case and Judge Persky's decision. It will be sent to him, the Superior Court of Santa Clara County, California State, and the California State Appellate Court. It points out that, unlike Turner, the woman he sexually assaulted has already received a figurative life sentence. As of Monday, it has received over 4,300 signatures. Find the petition here.

2) File A Complaint To Have Judge Persky Removed

This petition encourages people who disagree with Turner's sentence to recall Judge Persky. He is currently running for reelection in the Fall, but faces no competitors, meaning his name will not show up on the ballot. The only way to stop him from serving another term, then, is to recall him. The petition has accumulated over 18,000 signatures and will be sent to the Superior Court of California and the State of California Commission on Judicial Performance. You can sign the petition here.

3) Another Request To Remove Judge Persky

The petition is similar to the second one, but has received over 58,500 signatures. It maintains that Persky's decision didn't reflect the opinion of the general population or the Santa Clara district attorney. The petition is located here.

4) Give Turner The Maximum Sentence

This petition asks Judge Persky to reconsider the six-month sentence he assigned to Turner, and sentence him instead to 14 years. So far, it has just over 2,000 signatures and is looking for about 500 more. If you believe Turner should have received 14 years in prison, you can access the petition here.

5) A Longer Sentence For Turner

Looking to reach 100 supporters, the petition will be sent to Sen. Barbara Boxer, Sen. Dianne Feinstein, and the California Superior Courts. It goes on to explain what "consent" really entails, but does not advocate for any particular sentence length. Find the petition here.

6) In Support Of The Survivor

Unlike the others, the petition focuses on providing more counseling resources for sexual assault victims on Stanford's campus. So far, it has just under 3,000 signatures, and is looking for 5,000. If you believe the university can do more to change the general population's attitude toward college rape victims and help those victims better heal, you can sign the petition here.