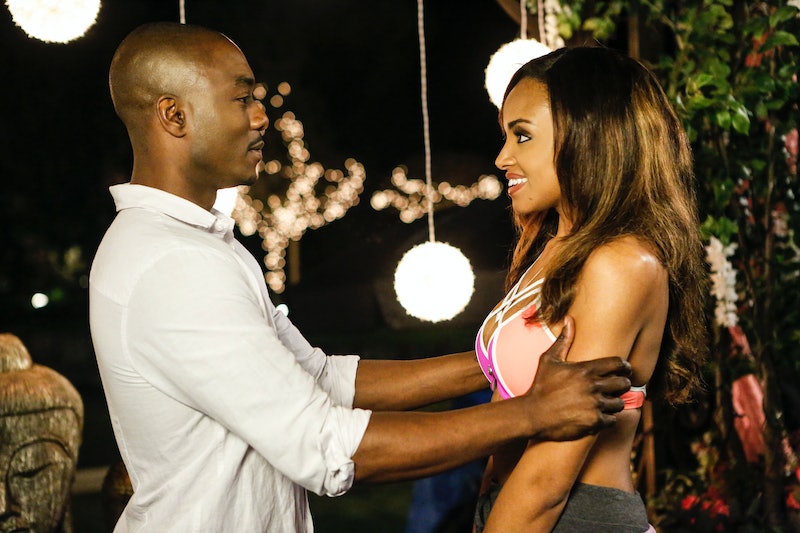 When it comes to the contestants on UnREAL's fictional reality show, there is always more than meets the eye. Who is Chantal on UnREAL ? Meagan Tandy plays one of the contenders for Darius' heart on the new season of Everlasting with an interesting past.

"[Chantal] is a Southern debutante as well as a former pageant queen," Tandy tells Bustle. "The thing with her is, right before she went to Everlasting her fiancé actually died. It was a tragic death, it was very sudden, something that she wasn't really expecting. And so although she probably should be at home sitting with what just happened, she's found herself on Everlasting thinking that she is in love with the new suitor Darius." There's definitely so much to unpack there already.

Tandy herself is not a Bachelor Nation fanatic so to speak. "I have tuned in to a few seasons here and there, but I'm not anything like my cousin, where they're having big viewing parties every Monday and trying to figure out who's the winner and who's not." Her cousin, on the other hand, has never watched UnREAL, so they're on opposite sides of the coin.

"I've actually spoken to her," Tandy says, "trying to educate her about what she's seeing on on The Bachelor and Bachelorette — but it's so funny, she won't listen to me. She doesn't want me to tell her anything. That's probably been the most frustrating thing because I'm like 'no, look, when he does that that's because they blah blah blah, etc.' — she just doesn't wanna hear it." For The Bachelor's part, host Chris Harrison claims UnREAL's take on reality TV dating is completely fictional, according to an interview with Variety.

Still, that (hilarious) promo says it all — right? "I mean let's face it, when people are watching TV they wanna escape a little bit and this show, UnREAL, although you can still escape, it's very much exposing what the escape actually is ... I think that's what makes this show so edgy."

Even though it's called "reality television," we aren't truly in it for the reality. It's still a fantasy, just like a movie or a novel or a ballet. When you think about how much a ballerina's feet are bleeding inside those shoes, it breaks the pretty picture. "The awesome thing about this show," Tandy says, "is that it really it helps people to understand the flip side to the reality life." It seems like her character Chantal has a lot going on under the surface too, so we'll definitely see all those sides come out when UnREAL returns on June 6.