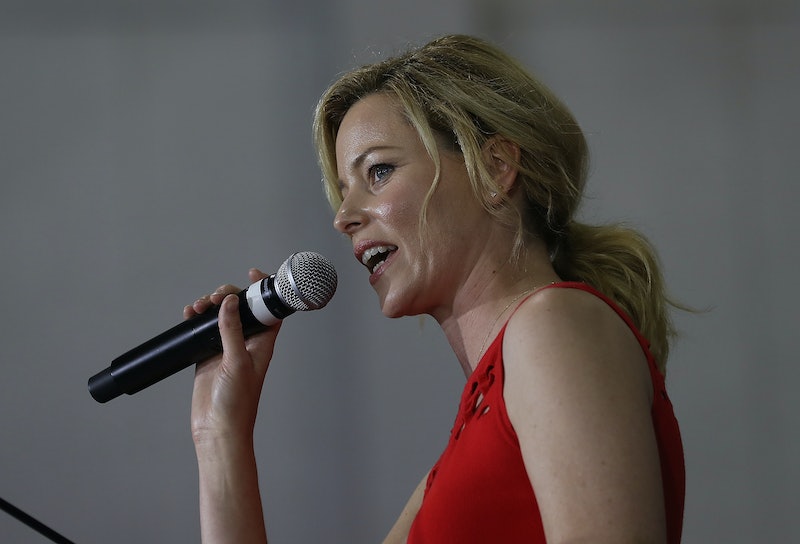 If you're looking forward to Pitch Perfect 3 (i.e. are a human being who doesn't hate laughing) we have some aca-awful news. Elizabeth Banks announced she won't be directing the Pitch Perfect trequel during a panel at the PGA's Produced By Conference. Her reasoning? It would seem that directing was conflicting with her motherhood duties:

And while it's a bummer that Banks had to give up that role — she did a strong job with Pitch Perfect 2 — we have to give her props for being so open about prioritizing her children. It shows that we're finally starting to have some honest discussions about women in the film industry.

It seems like women have been criticized over choosing family over a career forever... and vice versa. The conflict, which somehow rarely applies to men (WEIRD) is a double-edged sword, really. The ideal woman somehow manages to "have it all," and balance it all with a big old smile. It's a fallacy, and a harmful one.

Likewise, when it comes to personal expression end of feminism, it's a lot about respecting choice: the freedom to do what's right for you. So you have to support Banks choice to unburden herself with directing this Pitch Perfect installment if she thinks it's impacting her parental duties. The subtext is that Banks is copping to the fact that it's hard to have it all, and that as a woman, as a person, you're allowed to drop things in order to make your life a little bit easier.

And I mean, listen, that woman is busy. And it isn't as though this means that Banks is leaving the franchise entirely, or that she's going to stop campaigning for more fully-formed female characters in media. Please. She's likely still sticking with her roles as producer and bubbly, passive-aggressive commentary Gail Abernathy-McKadden. I'm sure that she'll find someone else to responsibly take on directing duties. After all, Jason Moore did perfectly fine with the first Pitch Perfect.

At the end of the day, it sucks that we're losing Banks on the directing end of the Pitch Perfect trequel, but I have faith that it won't be the reason that the movie will fall apart. It'll probably naturally fall apart by virtue of being the third movie in a trilogy.

More like this
The Biggest Differences Between 'Bullet Train' & The Book It’s Based On
By Arya Roshanian
‘The Simpsons’ Will *Finally* Address How They “Predict The Future”
By Sam Ramsden
10 Must-Read New Books Out This Week
By K.W. Colyard
The Bestselling Novel 'The Doll Factory' Will Be Adapted Into Thrilling TV Series
By Catharina Cheung
Get Even More From Bustle — Sign Up For The Newsletter